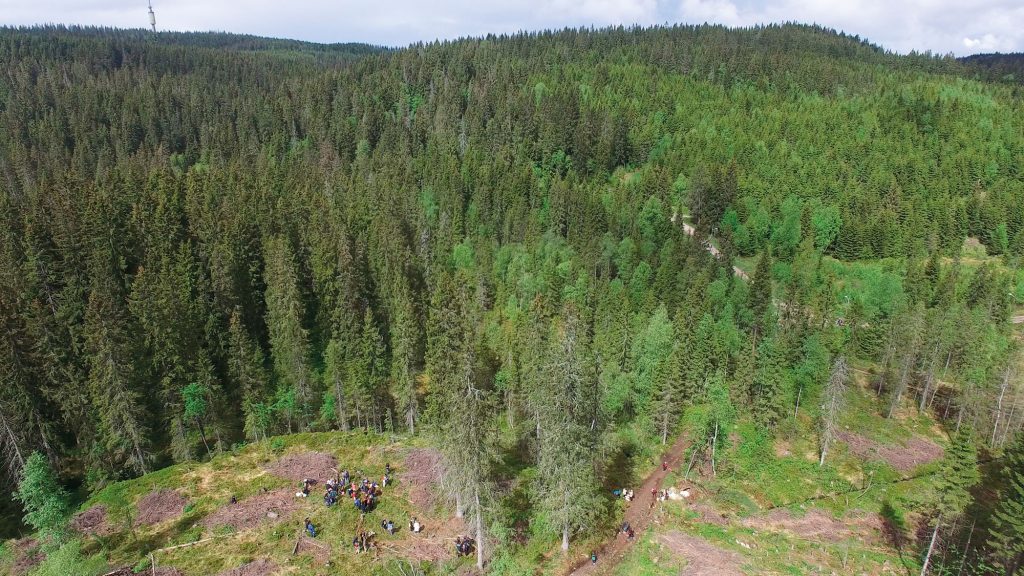 Doctor of humanitarian sciences and author of the book Power of Creativity? Critique of Neoliberal Culture Politics Skaidra Trilupaitytė discusses the open call by the Ministry of Culture to present ideas for the Memorial of the Lukiškės Square. The cultural politician is in conversation with the art critic and curator of the National Gallery Eglė Juocevičiūtė.

Eglė Juocevičiūtė: What do you make of the decision of the Ministry of Culture to organise the creative workshop for the Memorial of Lukiškės Square in partnership with the Contemporary Art Centre? Is it an adequate response to the public dissatisfaction, expressed by art experts this spring, about the poor artistic quality of former competitions?

Skaidra Trilupaitytė: Those involved in the current discussion about a future memorial unanimously agree, that if an object is to appear in Lukiškės Square, it should be dedicated to the idea of freedom and should commemorate freedom fighters. I see it as a positive, that today’s rulers of the state and the city no longer feel inclined to discuss the concrete forms of the memorial, as if knowing by intuition, that in a democratic society the visual form of a monument should not depend on the tastes of official officers. As far as I know, only the mayor of Vilnius, Remigijus Šimašius, offered a personal preference, suggesting that the Memorial of Lukiškės Square should include Vytis, though he expressed doubts as to whether it should be ‘Vytis in this particular form’ – referring to that which is lobbied by the Vytis Support Foundation. The Ministry of Culture has cautiously chosen another way by delegating the role to a contemporary art institution, which will initiate the dialogue with the public and organise the competition. At this point we could ask only why the Ministry has chosen the Contemporary Art Centre and not some other organisation.

E.J. It has been stated that in this project the Contemporary Art Centre will act as a mediator between the authors of ideas for the memorial and specialists from different fields, groups of interests, producers etc. These specialists are invited to collaborate on the development of the projects for different phases of the workshop, if the authors wish.

S.T. Knowing the experience of the CAC in the organisation and production of major art projects, the Ministry seems to have made a rather logical choice. In doing this, the state seems to have made a genuine shift in the way it has organised public monuments for the past few decades.

E.J. More and more one hears the opinion, that the former competitions did not work because of the bureaucratic and professional limitations that were applied.

S.T. The fact that competitions for the representational public spaces in Lithuania more often than not become ‘a failure’ is best illustrated by the desperate efforts to ‘do something’ in Lukiškės Square on the approach of an important anniversary in Lithuania or Vilnius’ calendar. There has been extensive coverage in the media on the repeated efforts to give meaning to this location since 1995, when the Municipality of Vilnius first took the initiative to establish the square’s function. Later other institutions did not manage to solve the urbanistic problem due to confusing laws. Here we can talk about the programmed failure, caused exactly by the traditional format of a competition.

This kind of communication between authorities and artists is not entirely new. In fact many discussions arose in 1988, during the first competition for the monument dedicated to the establishment of the city of Vilnius. Confrontations between different members of Lithuania’s cultural society, which lasted well over a year, concluded in a rather unsuccessful transformation of the chamber sculpture of the Grand Duke of Lithuania Gediminas by Vytautas Kašuba into an enlarged monument, erected in the Cathedral Square in 1996. There were many such compromising cases. In spite of the results, people constantly complained that even anonymous competitions did not ensure publicity and transparency, and every announcement of competition winners resulted in big discussions and public dissatisfaction. In 2013, when the Ministry of Culture announced the winner – the sculpture The Spirit of the Nation by Vytautas Gylikis – different institutions were flooded by written complaints from those who did not win and popular journalists expressed huge indignation.

That is why the CAC first and foremost aims to initiate a dialogue with the creative society and organise a completely open workshop instead of a closed competition with too many strict requirements. The official open call for the creative workshop mentions only three essential requirements, one of which is that the memorial has to be devoted to perpetuating and honouring the memory of freedom fighters of Lithuania. For me the most important achievement is the invitation to critically rethink the very conception of a memorial.

E.J. The discussions about Lukiškės Square have brought about clashes between different groups of interests. Namely the political powers, represented by the changing authorities of the government and the municipality; the civil powers, firstly represented by the communities of patriots, and inhabitants of the city, who are ‘consuming’ and will be ‘consuming’ this part of the city every day; and also members of the cultural field – mostly from the disciplines of visual art and architecture. The statement made by the vice-chairman of the Vytis Support Foundation Vilius Kavaliauskas clearly illustrates the confrontational nature of these groups– he interprets the decision of the Ministry of Culture to delegate the organisation of the workshop to the Contemporary Art Centre as censorship. What would the ideal system look like for these groups to agree? Who should have the final decision?

S.T. The comparison of this latest open call to censorship sounds incorrect to me. The CAC is attempting another way by initiating discussions before the competition and not imposing strictly defined conditions, which should be implemented or cleverly interpreted by artists. In the workshop of ideas, the artists themselves have the space to create these conditions, and form the public discourse of the city. What I see in the new call by the CAC is a fresh attitude towards the idea of a city space.

In former competitions it was commonplace to make it a requirement for the proposal to depict an idea through recognisable signs. For example, the task of perpetuating certain historical ideas was always accompanied by the condition to list as many dates and personalities as possible. In this case nobody proposes to commemorate the glorious past with a set of predesigned symbols, it is a call for dialogue that ‘integrates different sides into a conversation from the very beginning and ensures an all-round creative process’. The situation of Lukiškės Square and decades worth of discussions about the representative public space implies the necessity for a new approach. But architect and founder of the Vytis Support Foundation Kęstutis Akelaitis’ publicly expressed fear that the CAC members on the commissioning panel would hardly vote for a ‘realistic model’, is a reasonable one. Personally, I also don’t think that this panel will be impressed by 20th century sculptural work, in spite of the fact that the panel has two members, who were also on the panel organised by the Vytis Support Foundation.

These kind of artworks adequately represent a certain époque. The centre of Riga’s has a rather impressive Monument of Freedom with the figure of a woman’s on a high pedestal, but this monument was erected in 1935. In the case of Vilnius we have to think in artistic terms of the 21st century and search for a contemporary memorial to freedom. This is probably why the wording in the open call refers to the changing concept of a monument in Western society over the centuries and decades and speaks of the contemporary ways to preserve memory. For example, long-term projects, which do not have a final form – like Future Library by Katie Paterson that was started in 2014 and Sophie Calle’s 25-year memorial Here Lie the Secrets of The Visitors of Green-Wood Cemetery in Brooklyn (USA). This competition is probably the first time that the endurance of the memorial is not related to requirements for a specific size (lets say, some meters high) or materials (stone or bronze).

E.J. The first competition to establish the function of Lukiškės Square was organised by the Vilnius Municipality in 1995. After five years, on the initiative of the ruling party at the time ¬– The Homeland Union – Parliament passed The Law of Lukiškės Square, which was later neglected by the veto of President Valdas Adamkus, who determined that the square belonged to the competence of the municipality. Between 2007 and 2008 the municipality organised a creative workshop, which aimed to finish the reconstruction of the square by 2009 – in commemoration of 1000 years from the first mentioning of Lithuania’s name. When the plan failed, the Government took over the process in 2010 and divided the project into two segments and phases – in 2011 the Ministry of Environment organised an architectural competition and in 2013 the Ministry of Culture organised an artistic competition. Dividing the ‘problem’ meant it was possible to different institutions and different artistic fields t make the decisions, which accelerated the ‘utilitarian’ reconstruction of the public space – the square was seen as a place, needed for everyday use. Meanwhile its symbolic meaning, an agreement, what it should commemorate and who it should represent, was postponed for later. Is that fact, that Lukiškės Square has been a topic of public discussion for more than twenty years with no solution, typical of Lithuanian public (cultural) space, or is it a unique phenomena?

S.T. It is not accidental, that Lithuanian art critics have frequently mentioned the failures of competitions for monuments in Lithuania, while simultaneously referring to various successful examples in Western countries. If I remember correctly, Giedrė Jankevičiūtė once wrote, that from Gediminas Avenue to the Cathedral you cannot find a single successful sculptural work. Ernestas Parulskis’ audit finds that the majority of monuments erected in Vilnius are traditional representational sculpture. But today it is important to ask ourselves, what tradition we are talking about. Shouldn’t we remember that in Western societies artistic traditions were changing, especially after the Second World War? As a brief reminder let us recall some of the widely known artworks that have become classical, such as the Vietnam Veterans Memorial by Maya Lin in Washington or the memorial for the victims of Holocaust by Peter Eisenman in Berlin. I don’t know if the monument to Vincas Kudirka by Arūnas Sakalauskas will be regarded as traditional, but in my opinion it is artistically less successful than the abstract artwork by the same artist, dedicated to the connection of Little Lithuania to Big Lithuania and erected in Klaipėda in 2003. Today the equestrian on the horse created by the same sculptor and proposed by the Vytis Support Foundation for Lukiškės Square, probably stands less chance of being remembered as a good example of contemporary Lithuanian sculpture.