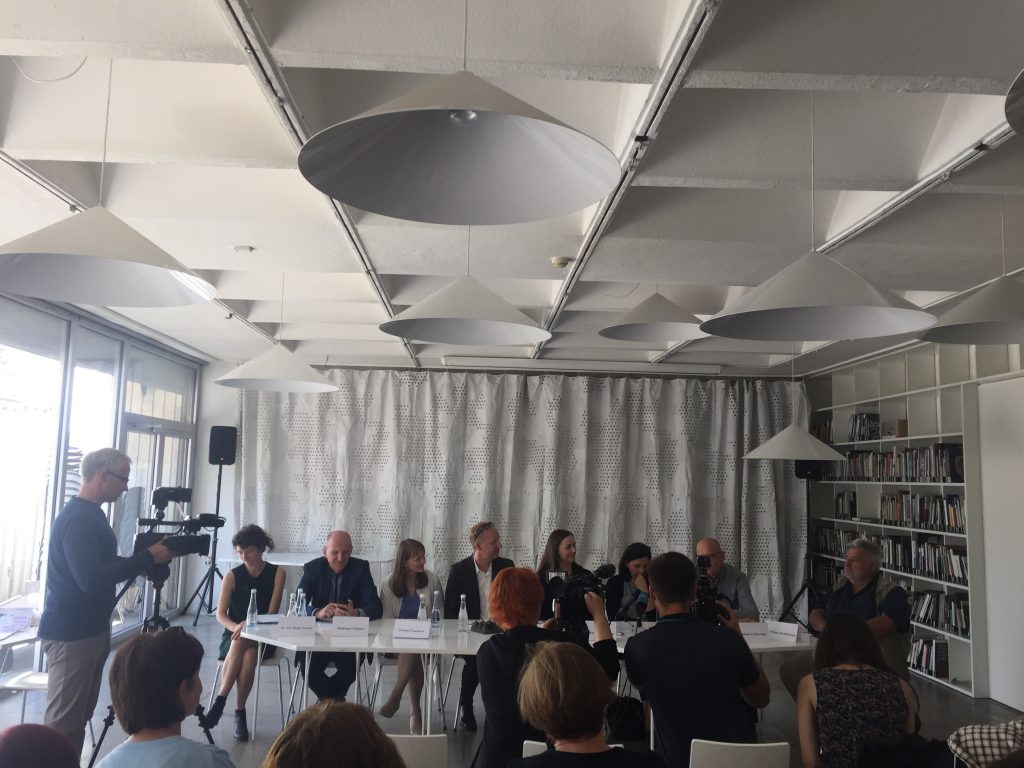 In 1999 the Lithuanian Parliament granted Lukiškės Square the status of the Lithuanian state square and designated its two main functions – that of state representation and social function. Emphasising the direct links between Lukiškės Square and regimes of occupation and the history of freedom fighters, this resolution of Parliament also stated an intention to develop the memorial function of the square including other memorial objects already existing in the square or beside it.

The panel, which has selected five proposals for the memorial of Lukiškės Square, evaluated more than thirty ideas, following an open call initiated by the Contemporary Art Centre on 6 June. The aim of the future memorial is to perpetuate and honour those who fought for the freedom of Lithuania.

The authors invited to participate in the creative workshop, are the architect Gintaras Čaikauskas with the creative group consisting of sculptor Arūnas Sakalauskas and architects Kęstutis Akelaitis and Linas Naujokaitis (known to Lithuanian society as the authors of the memorial, supported by Vytis Support Foundation); the architect, the doctor of humanitarian sciences and the theoretician of architecture Tomas Grunskis with the team ‘aexn’; sculptor and designer Andrius Labašauskas; local ethnographer Algimantas Lelešius; photographer, film and installation artist Darius Žiūra.

If any of the authors withdraw from participating in the workshop for any reason, the panel will offer their place to the authors of another proposal.

In selecting the shortlist the panel has prioritised those ideas, which do not contradict the representational function of the square and the architectural plan that is currently being implemented, as well as proposals, which best meet the criteria of perpetuating the memory of the fighters for the freedom of Lithuania. One more criteria of the equal importance is the openness of these ideas to the contemporary forms of culture and representation.

The panel evaluated a very broad spectrum of ideas. The ideas were proposed by authors from diverse professional backgrounds – from contemporary artists, architects and other cultural industries to enthusiasts of history and a range of professional and social organisations.

Each of the shortlisted ideas proposes a distinct way to perpetuate memory. The project by Darius Žiūra applies contemporary technologies to create a unique archive of recordings and would encourage entire generations to become involved in the ritual of honouring and memory creation. The panel believe this project would encourage personal civil motivation. The small-scale architectural monuments proposed by Algimantas Lelešius would effectively and attractively reveal the story of freedom arising from the community itself. This project could be implemented on the basis of a fruitful cultural collaboration between a few organisations and initiatives. The proposal by Andrius Labašauskas was applauded for the laconic modern vision of the memorial and its site-specificity. The way to perpetuate memory, proposed by Tomas Grunskis was selected for its contemporary form, which is open to further development, and has been created using the archetypical symbols to represent the fight for freedom. Finally the proposal by Gintaras Čaikauskas and his team was regarded as an important contribution for its contemporary interpretation of traditional sculpture and the way in which it explores expressions of a heraldic state.

It is crucial to emphasise that the authors were invited to present ideas and not fully formed projects. For this reason, the organisers will not publicise the initial submissions and have instead allocated time for the ideas to be developed over the coming months for public presentation in autumn 2017 or later if necessary. We ask for the understanding of journalists and the media, and eagerly await the project presentations created during the workshop.

The organisers of the creative workshop would like to thank everybody who submitted proposals. All of the authors invited to participate in the creative workshop, will soon receive feedback and recommendations from the panel, for consideration when developing their proposals. The organisers will contact the authors shortly to inform them about the further next stages of the workshop.

The creative workshop is organised by the Ministry of Culture and the Contemporary Art Centre. It has been designed to aide the five shortlisted with the development of their ideas through consultation with specialists from various fields, groups of interests, representatives of the Government and the municipality, producers and architects. The workshop will enable the authors to create preliminary plans of implementation and prepare a public presentation of their project for autumn 2017. Following this presentation, one project will be selected and implemented.

The commissioning panel is comprised of the following members: