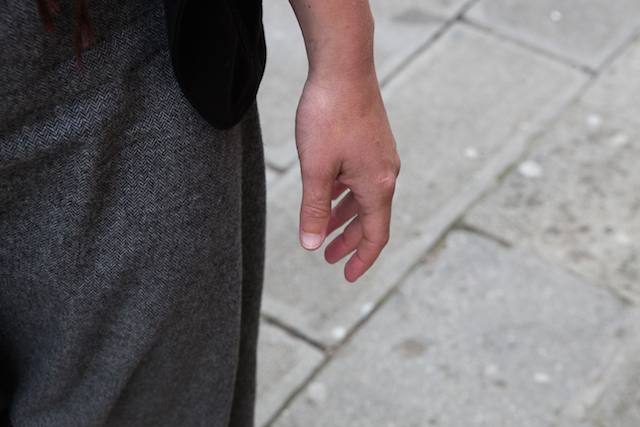 Immediately after the intense simultaneous experience of physical and mediated realities in the Ghost Machine (2010), a physical cinema piece at Hebbel Theater in Berlin by Janet Cardiff and George Burr Miller, that lasted for half an hour, I could not understand what has just happened with me. Before the artist Marcos Lutyens made the monument of Frank Zappa in Vilnius “vanish” during the hypnosis session (Zappa Project: a case study for Active City Cancellation, 2012), the curator Raimundas Malašauskas said that he treated the brain and the mind as any other medium in the arts. After which, I thought: ‘right, indeed…’. When the artist Myriam Lefkowitz introduced me to her only rule – that it was a walk in silence, asked to close my eyes and took me for an hour tour in Venice (Walk, Hands, Eyes (Venice), 2013) guiding me by touch, which unclosed the city to me in a way I would never expect to experience it (and myself), I had no doubts: such art practices possess something exclusive that should be discussed in art theory and wider cultural context.

Knowledge from neuroscience and consciousness studies stimulate the expansion of art practices: artists discover and develop new ways of making art, with an attempt to “conquer” still unexplored subjective, liquid and intangible medium – the human brain and consciousness. The 21st c. witnesses the emergence of ultimately performative participatory art form. Art is being created by means of physiological and psychic sensations of a participant. I would suggest a term embodied art to name such practice. An exceptional feature of such practice is the synthesis of usually separate components of an art work (media, technology, materials) in participant’s consciousness in a form of subjective and thus unique experience. Not the material object but the experience becomes the final piece of art. The human body performs a function of a liquid “storage” or a medium of a piece. An artwork that is possessed only by the memory of a participant, cannot be properly recreated or reproduced by any means. Embodied art that metaphorically might be named a ‘black box’ emerges out of the interplay between science and the arts, and should be considered as a new way of exploring the life forms in the arts. These are the propositions that I will try to explicate in the presentation of my research.

Dovilė Tumpytė, PhD student in Art Theory (since 2013) at the Vilnius Academy of Arts