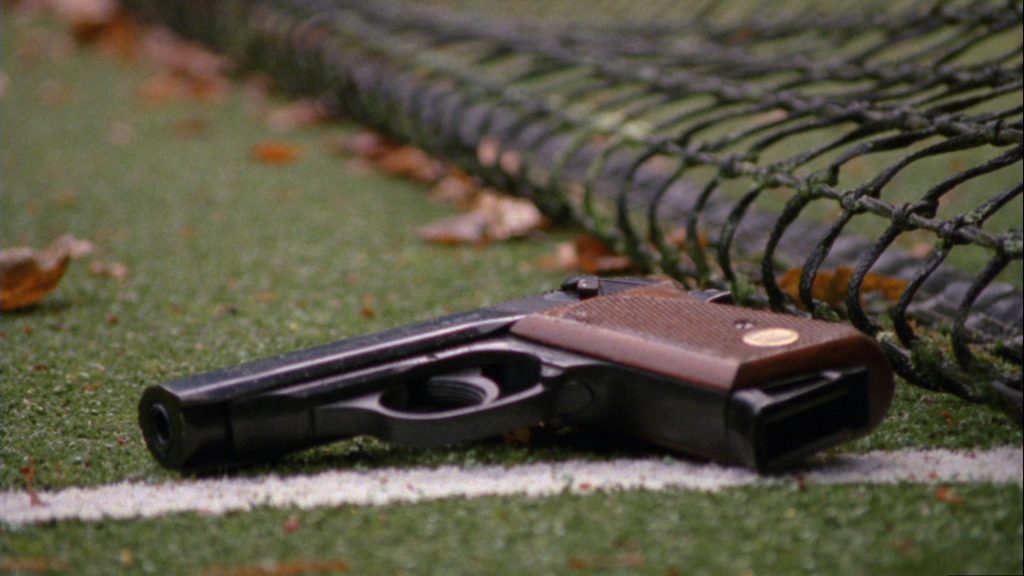 It all starts with an impossibility, whether it be the origin of the film, or be it encountered during the process of making it, or merely portrayed. A physical or psychological constraint, a political restriction that the film not only mirrors, but potentially takes advantage of.

We Can’t Go Home Again initiates with works whose circular structures serve as an introductory prologue, in which detour and convolution become means to wrestle with an elusive centre. The programme delves into films that reflect on political inhibition and the ways to address it in terms of construction and form. It takes a journey across works that dare putting cinematic grammar and discursive conviction at risk in their steps towards visual and political dissent.

Progressing towards more personal concerns, the programme slowly turns to a series of works in which the impossible and the threat of collapsing are closely connected to the first person and its affects; losing battles, at times purely utopian, often extremely intimate and therefore inherently burdensome and sensitive. We Can’t Go Home Again thereby ends on a selection of works in which affective collapse –depression, melancholia, heartbreak… in sum, being blue– is mirrored in the disfiguration of images and speech. Far from conveying helplessness, these cinematic choices demonstrate that admitting one’s own frailty and incoherence –or that of the images– can become yet other expressions of emancipation.

Emilie Bujès is an independent curator, as well as a programmer for Visions du Réel, International Film Festival (Nyon – Switzerland) and the deputy artistic director of La Roche-sur-Yon International Film Festival (France). She has been a curator at the Contemporary Art Center of Geneva between 2010 and 2014, developing several exhibitions and projects often exploring film archives, as well as documentary practices and their relationship to history and memory.

Anna Manubens is an independent producer and curator with a preference for hybrid roles and contexts at the intersection between research, public programming, close project development and exhibition-making. Based in Barcelona, she combines her freelance activity with a regular involvement with Auguste Orts, a Belgian artist-run organisation dedicated to the production of artists’ films and the ideas that surround it. She is a board member of Hamaca– the archive and distribution platform for Spanish moving-image art– and was previously artistic director of LOOP Festival and professor at Universitat Pompeu Fabra, both in Barcelona.

The circle as a form is at once a figure of commonality; a figure of detour or convolution and a figure of endlessness. With extremely different styles and voices, the three films speak of a form of searching that is not after something lost or predefined. On the contrary, searching –whether it means searching for a film structure, an image or for a way of making sense together– is the gear of a circular lingering that seems to take pleasure in inconclusiveness. The Joycean Society performs a cinematic death of the author. In The Tiger’s Mind, death becomes murder when voices start eating each other apart in the attempt of speaking together. The Dent is a meditation after the crime, after the blow. The film looks at the dent –the mark, the void– left by a hit as the source for endless interpretations. The programme is about reading, voicing and writing in relation to death, murder and eventually forensics.

Facing a 20 years ban from filmmaking, 20 years ban from writing screenplays, 20 years ban from leaving the country, Jafar Panahi attempts to create an image of the film he was aiming to make, by reading the script while being filmed by a friend on a phone, at home under house arrest. Thus, the impossibility is at the origin of a process based on pure construction and imagination –that of Panahi, but also that of the spectator, who by necessity accepts to embark on a journey made of his own pictures. Inherently impregnated with politics, This is Not a Film is a (non) movie about loneliness, at times philosophical, at times playful or tense, vital.

PROGRAMME 3: The Voice is a Fiction

Whereas it is a physical confinement that is a the core of Jafar Panahi and Mojtaba Mirtahmasb’s film, this program rather explores some political and artistic impediments. How indeed to appropriate and represent a remote history or place, that by definition does not belong to oneself? The three films seem to investigate this issue through certain strategies related to the use of speech. Mathieu Kleyebe Abonnenc whose work often implicates some research into the recent colonial and postcolonial history, spans here different forms, from staging to testimony, over a lecture given by an historian who seem to embody the artist and his ambiguous position. Marie Voignier on the contrary renounces speech in order to exacerbate the fiction it conveys in a country such as North Korea. As for Salomé Lamas, it is the weaving of two narrations and their fertile dissonance that allows to create a certain image and in parallel a truth that remains impossible to grasp.

PROGRAMME 4: Holding it Together

If programme 2 and 3 testify to the encountered obstacle as a productive force, in this programme the obstacle remains but it lies closer to the “I”. These three films dare to be personal; they dare intimacy. Markedly non-sensationalist, we feel however the imprint of a personal wrestle that translates into cinematic preferences. How to hold it together? is the question that emerges as being addressed to both film editing and emotions.
The three filmmakers had to renegotiate their usual way of working in order to face inherited objects in Dad’s Stick, sudden absence in Invisible and disordered audio-visual notes in By Day. The substitution of voice or narrative by rhythm, text and music seem to point at the way out.

PROGRAMME 5: “I’m a Stranger Here Myself”

Invited to teach at Harpur College – Binghampton University in New York in 1971, Nicholas Ray resolves to recruit his students to make a movie instead of lecturing them. The experience and the film resulting from this process, collective and utopian, shot in various formats, using superimpositions and split-screens, is as much a chronic as it is a self-portrait. Experimental and daring, We Can’t Go Home Again, which the filmmaker of Rebel Without a Cause still considered incomplete on the eve of his death in 1979, is an expressive journey, filled with coexisting and blurred images, confessions and emotions, in the politically tumultuous 1970’s USA.

PROGRAMME 6: (Dis) Figuring Oneself Out I

Replaced by a performative reading of Chroma by Derek Jarman interpreted by Rytis Saladžius and Gabija Jeraminaitė.

When breakdown occurs, when one sinks into the blue, film can become a form of overcoming. Whether it is to make sense for the other, or to dissolve and dismantle identity and representation, film can be a space for dealing with distress and fighting in the midst of frailty. Anne Charlotte Robertson’s filmic diary violently captures her most intimate and obsessive inner dialogues while foregrounding her intention to make herself intelligible in a seemingly therapeutic editing process. At the antipodes of her attitude, Derek Jarman accomplishes in Blue the disappearance of the individual self in the image and speech in favour of disembodied collective voices and suppressed representation. Personal affects, memories and bodies melt with those of others, including those of the cinema audience as we progressively get caught in the blue that bathes the room.

PROGRAMME 7: (Dis) Figuring Oneself Out II

E Agora? Lembra-me is a contemporary extension of the meditation initiated by Jarman in Blue. Also affected by AIDS, Joaquim Pinto translates Jarman’s dissolution of individual boundaries into socio-political terms. The body is understood as a battlefield that is connected to –traversed, moved, intoxicated or saved by– wider political circumstances. Pinto initiates a new experimental treatment in Madrid (Spain) as the Partido Popular (PP) wins the elections. The cure for his illness becomes entangled with austerity measures and his organic struggle is mirrored by his husband’s ecological fight against land exploitation. However, frailty is not equivalent to self-abandonment. The whole film project started as a video-diary aimed at empowering future users of the treatment. The year-long recording of therapy is intimate without being exhibitionist and deals in the first person with collective issues such as economic crisis, health privatisation, cinema history and fragile communities.

Film programme will be presented by curators and guest speakers.

All the films in the programme will be translated to lithuanian language.

More information about the programme you can find at www.cac.lt