Film retrospective by Siegfried A. Fruhauf at CAC Cinema 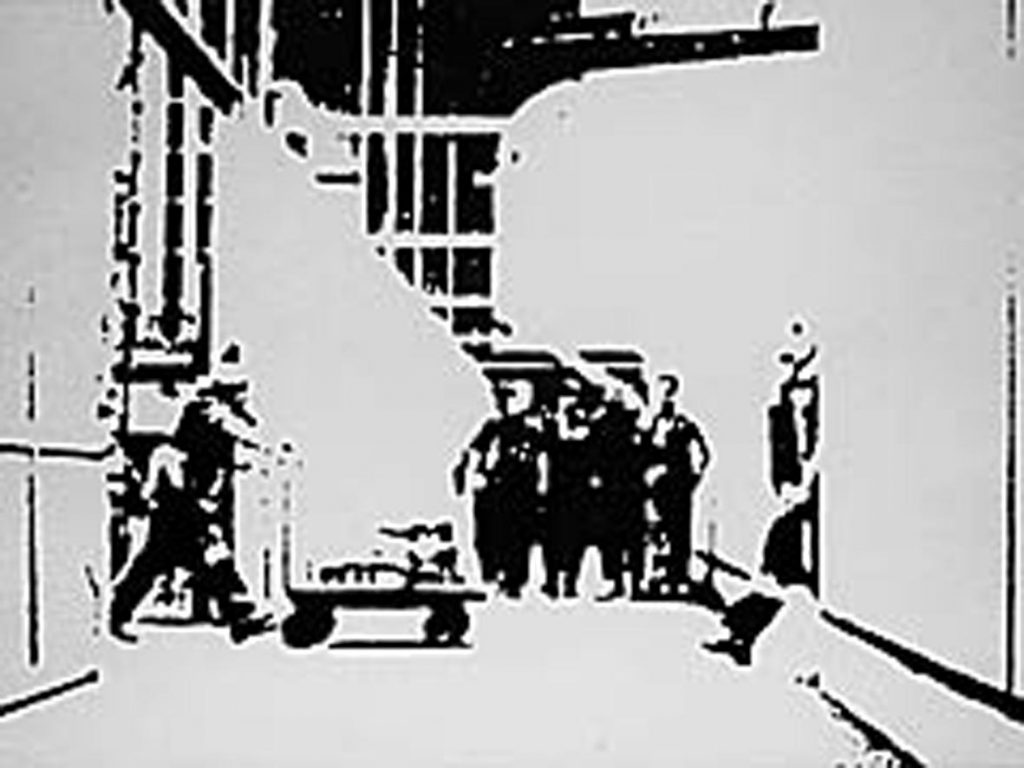 The fact that Siegfried Fruhauf’s films have a certain hypnotic effect cannot be denied. Battles of material take place in them, they contain reflections and illusions, soundtracks filled with noise and visual interference signals run riot; at the same time all the structural experiments the filmmaker risks never rigidify in the merely theoretical. Fruhauf’s cinema is extremely atmospheric and decidedly non-academic. On the contrary, it presents itself as being radically undogmatic, alternating between ab-straction and representation, between punk and classicism. (Stefan Grissemann)

Films in the programme:

Fruhauf increases the acceleration of the striding workers in discrete steps until they are tearing along – the capacity of the film tested to its outer limits – until it can’t take any more. Maximum acceleration leads to stasis – after the acceleration throughout the film comes the logical consequence – the last frame – the freeze frame. The workers are motionless, and with them the factory. Rien ne va plus. (Peter Tscherkassky)

Translated literally “expose” means“to make something visible” or “uncovered”. In photography it means to subject photographic film to light. Exposed uses short scene from a feature film – a man observes a dancing woman through a keyhole – is used as the raw material. Solely fragments of this tableau are visible to the viewer, and Fruhauf ”re-exposes” the scene by passing the perforations of a strip of film in front of the projector so that they resemble a moving sieve.

The light of the sun is the only type of lighting used to illuminate the movie screen in REALTIME. And the sunrise, filmed in realtime, is the only discernible motion – which makes us realize that all motion, in film and in the cosmos, is temporal.

The analog film image is replaced by the electronic video image, and the haptic quality of the material makes way for the purely optic nature of a two-dimensional white field generated by a computer. Not only the image but the medium, the material itself proves to be illusory, the original cinematographic apparatus has long since disappeared. (Gerald Weber)

In Mirror Mechanics, a young woman with wet hair glances in a bathroom mirror. She wipes across the surface with a brush of the hand: the picture that shows this scene is mirrored along the center axis, alienated in a type of double projection. That is the starting point: Siegfried A. Fruhauf subjects his material to a series of complex transformations, overlapping and intertwining variously processed image layers, double reflec- tions, and multiple exposures. Jürgen Gruber’s subtle soundtrack composed from intimated guitar feedback and electronic sound details gives the film an aura of smoldering aggression: the foundations of a thriller. (Stefan Grissemann)

The sky’s blue hanging above the black of a forest. Lightning flashes over a clearing. And the white ball of the moon with dark spots. These are the three suggestions that make Night Sweat an examination of a visual effect’s technical aspects. The film was shot in analog Hi-8 video. Its poor resolution, especially in precarious light conditions, occupies the foreground in the first and third chapters. At the same time the musical accompaniment matches perfectly, with scattering beats, dubby wisps of sound and intensifying distortion effects. In the zoom of this part’s final shot the pixelated blue of the night resembles the pandemonium of bacteria under a microscope: The image exists behind the documentary appearance. (Thomas Edlinger)

Mountain Trip is a cinematic myriorama constructed of hundreds of Austrian postcards, which reflect a country‘s hackneyed trappings as no other medium can. (Siegfried A. Fruhauf)

The Sea of Tranquility, where the first humans set foot on the Moon, is no more than a mental leap away in tranquility also. The plane, the majestic takeoff of which Fruhauf shows in a silent sequence, moves away from the woman on the beach (if anyone is still thinking about her at this point) like a gigantic floating palace, and one could say that Tranquility is also a film which should be seen as a flight from material to material, the crossing of a castle in the air constructed under the great sun of the exposure. The here and there are separated by the feverish dream of a radiated force that leaves traces of the world in the film‘s images. A sea of tranquility, though its waves can surge ecstatically at any time. (Bert Rebhandl)

Siegfried A. Fruhauf‘s Exterior Extended is a prime example of an artistic strategy whereby a maximum effect is achieved through the combination of a minimum of individual elements. A 35 mm film with thirty-six photos on it suffices as starting material for a stringent study on the theme of spatial perception in film. As motif, Fruhauf takes a dilapidated ruin of a house in the countryside wildly overgrown with plants. (Norbert Pfaffenbichler)

Film programme by Siegfried A. Fruhauf was organized at CAC Cinema together with The Austrian Embassy in Vilnius. All films in the programme are without dialogs, entrance is free.