Have a Good Day! 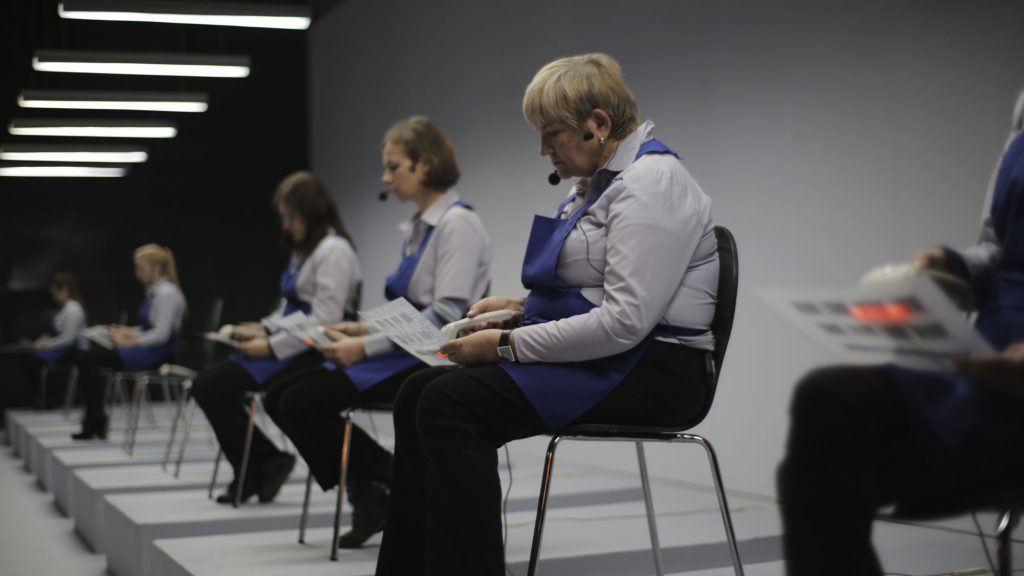 After the 8:00 pm presentation – a meeting with the project creative group, moderated by Vlada Kalpokaitė and Veronika Janatjeva.

The opera focuses on the inner lives of cashiers in a shopping centre: showing what lies behind their mechanical “Good afternoon!“, “Thank you!“, “Have a good day!”, and fake smiles. Faceless, robot-like shop workers found in everyday life are transformed into unique and lively characters. Their secret thoughts and biographies are turned into short, personal dramas. The characters of different sales clerks, embodying universal archetypes, convey the predominant social landscape. The libretto is a revealing mosaic of spoken, literary language and documentary.

The atmosphere of the supermarket is established through the glimmering and buzzing installation of daylight lamps and environmental sounds, connecting the audience to the stage and the 10 cashiers. The set itself is very minimalistic. Real goods – the recognizable décor of a shopping centre – exist only in acoustic and verbal form. The monotonous beep of each item being scanned is a key sound through the whole opera. It gets louder and quieter, but it is always present. Songs that accompany the beeping are as monotonous as the process of shopping and selling. Instead of becoming the main point of the opera, music serves the thoughts of the cashiers – it facilitates their voice.

The premiere of the short version of this opera took place in 2011 at the Contemporary Art Centre during the 4th Contemporary opera festival NOA (New Opera Action), and the full version was first presented in 2013 at the 10th International Vilnius Theatre Festival “Sirenos”.