Invitation to present ideas: a new phase in the search for the Memorial of Lukiškės Square 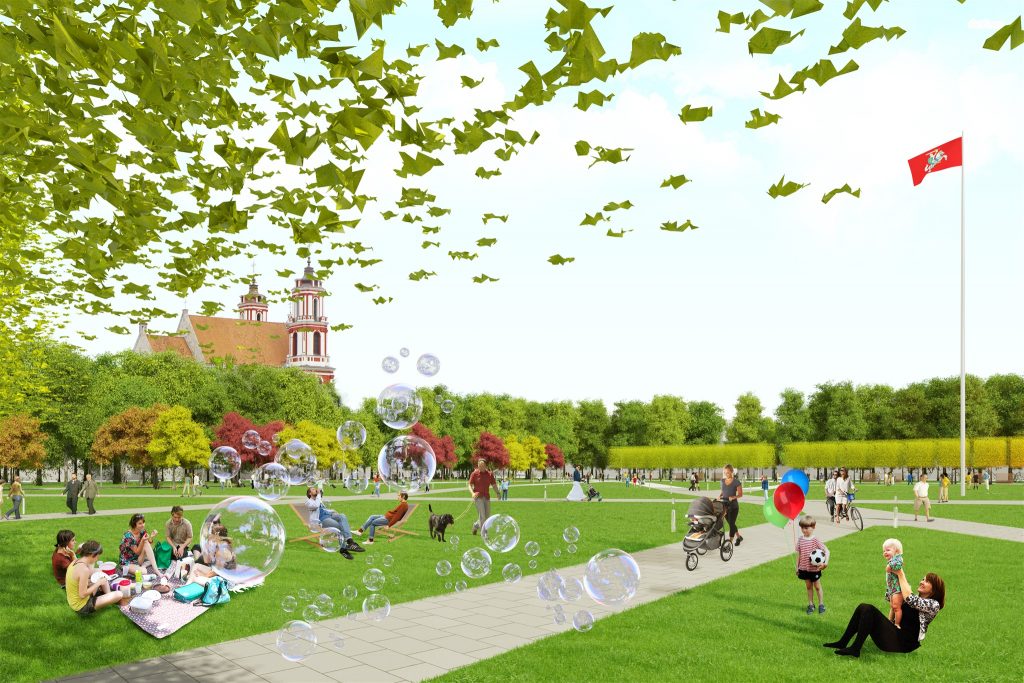 A long lingering search for the Memorial of Lukiškės Square encourages us to see it as a meaningful experience, a process and a symptom of wider phenomena. This long process is not only a story of failures. Many things were learnt and tested, and besides, it evolved against a background of historical, political and cultural changes, which appeared in quick succession over the decades of an Independent Lithuania. Other perspectives, which have opened up during this process, provide us with the opportunity to widen the scope of discussion and evaluate this situation anew.

The conception of a monument has been changing across the centuries and decades. Means to preserve memory can differ tremendously in different cultures and often it is precisely what reveals a particularity of a certain culture very clearly, while concrete monuments, created in different times, reflect the evolution of cultures. Nowadays, the changing concept of a monument is an important topic in local and international forums (conferences, competitions, study programmes, professional literature, etc.), where Lithuanian theoreticians and artists also participate. Keeping in mind societal changes and considering the range of personalities or phenomena to be commemorated, artists are searching for new modes of commemorating. At the same time, the concept of public space is changing and new forms of society’s self-consciousness are being formed.

In some cases, the element of time can create unexpected but very effective forms of monumentality, e.g. in 2014 in Norway the artist Katie Patterson started the project Future Library, which is designed for a collection of books to be printed in 100 years time. The texts for the anthology of books will be collected over 100 years and printed on paper, produced from a forest, which is specially grown for this purpose (https://www.futurelibrary.no/). Often, particular emphasis is given to contextuality – to concrete circumstances such as how a monument was created or to its particular environment as well as to people. In some instances the community may perform a central role in the creation of a monument. At the Green-Wood Cemetery in Brooklyn, New York, artist Sophie Calle has recently started a project, which will last for 25 years – she invites visitors to the memorial to participate in its continuous creation – to share their secrets.

Many centuries ago the suburb of Lukiškės was a district made up of Tatar people with a mosque, which became a religious centre for the Tatars of the Lithuanian Grand Duchy. In the 18th century a complex comprising the St. Jacob and Philip Church and the Dominican monastery was built besides it and a market square was formed. Lukiškės Square became the principal place for markets, fairs as well as army training exercises. After the uprising, between 1863 and 1864, rebels were also executed here. The square became an unofficial memorial place of the uprising, which was especially important for the Polish community of Vilnius.

The first politically and more important plans and practices, related to the territory of Lukiškės Square, appeared in between the two World Wars. At that time new office buildings and apartments were actively being constructed in Gediminas avenue. The uprising of 1863 acquired special significance in the political discourse of the Second Polish Republic and the square became a place for yearly commemorations of the uprising. The significance of this square as the main political dominant of the city became further pronounced after the ceremony in which the heart of Polish marshal Jozef Pilsudski was buried here in 1935 – the government planned to build a monument to the marshal and name the square Pilsudski Square in his honour. In 1945 the square became the central square of the capital of Soviet Lithuania and the most important representative square of the state. In 1952 the sculpture of Lenin, created by Nikolaj Tomsky, was erected in the middle of the square and later decommissioned in 1991.

In 1995 the Vilnius Municipality announced a competition to establish the function of Lukiškės Square. After one year the Board of Vilnius made a decision to create a memorial in Lukiškės Square to commemorate the sufferings of the Lithuanian nation. In 2000, on the initiative of the then ruling party called The Homeland Union, Parliament passed The Law of Lukiškės Square, which was later negated by the veto of the President Valdas Adamkus, who ruled that the square belonged to the competence of the municipality. In 2007 the municipality organised a creative workshop to search for the square’s function and in 2008 it announced the competition for the Lukiškės Square reconstruction project. The reconstruction was scheduled for completion in 2009 ¬– to commemorate 1000 years since the first mention of Lithuania’s name, but the plan was not implemented. In 2010 the Government took on responsibility for the reconstruction of Lukiškės Square. It tasked the Ministry of Environment with the organisation of a competition for an architectural project, while the Ministry of Culture organised a competition of artistic ideas.

In 2011 the Ministry of Environment announced the winner of the competition – the project Tranquility by Archstudio – and the Ministry of Culture announced the winner of the artistic idea – the sculpture The Spirit of the Nation by Vidmantas Gylikis. (Information about the events between 1991 to 2015 was prepared according to the statistics announced in the daily newspaper Lietuvos žinios No. 59 on 27.03.2015)

In 2015 the municipality started implementing the architectural project Tranquility, but in the phase of preparatory works, the project was stopped. Currently reconstruction works are being implemented in the square, under the directive of the municipality. A visualisation of this reconstruction can be seen by following the link at the end of this text.

In 2016 the private Vytis Support Foundation organised a competition of the Monument of Freedom on its own initiative. The competition was won by sculptor Arūnas Sakalauskas with architects Algis Vyšniūnas and Laimonas Bogušas. This memorial project was never approved by any state institution or municipality.

The Ministry of Culture assigned the organisation of the new phase in the creation of the Memorial of Lukiškės Square to one of the most important state cultural institutions – the Contemporary Art Centre. The CAC, subordinate to the Ministry of Culture, is an institution that was established in 1992 and organises contemporary art exhibitions in Lithuania and abroad, commissions new artworks of varied forms and scales, organises lectures, screenings and workshops, implements publishing and educational activities. The Contemporary Art Centre does not have a permanent art collection. Its team aims to create conditions for artists to create, implement and present their artwork, ideas and related activities to its visitors and participants. The trust of the Ministry of Culture creates the opportunity for the centre to employ its 25 years of expertise, in the creation of one of the most important symbols of the state.

The new phase in the selection of the Memorial of Lukiškės Square is also an opportunity to reconsider the usual structures of competitions. Previously, many of these competitions resulted in the implementation of poor reconstruction in the public spaces of Lithuanian cities, leaving many people dissatisfied with the long-term appearance and functions of their squares. The aim of the open call by the Ministry of Culture and the Contemporary Art Centre is to encourage artists once again to propose ideas for the memorial and create conditions for the development of these ideas in partnership with the main cultural institutions of the state, professionals from different spheres, and various groups of society that are interested in the implementation of this important memorial and in the artistic quality of Vilnius’ main city square. To achieve their ambitions and open up such a dialogue, the new phase is being organised in the form of a creative workshop.

On 6 June 2017 an open call for artists and artists’ groups was announced to asking for proposals for the memorial to be made by the deadline of 20 July. From this open call five proposals will be selected at the end of July by a panel of expert jurors. The authors of the five shortlisted ideas will be invited to continue working with the CAC team (or independently, if they prefer) to further develop their proposals and prepare their public presentation for late autumn.

A creative workshop is a commonly used term in the art context to describe a collective method of working through ideas or can be used as a synonym for a master-course. In this case, each author will focus on developing his/her own project and the structure of the workshop will be tailored to the specific needs of the project. The CAC, as the organising institution, will aim to ensure the necessary resources are available for this work and will perform as a mediator, if needed. The organisers will try to ensure that the selected projects are developed not on the basis of public opinion, or the interests of particular groups in society, but rather through direct dialogue with various groups of interests as well as institutions, which have a direct influence on the conception and implementation of the memorial. Besides, the CAC is sure, that the creative workshop will create a platform for constructive discussion – what kind of memorial could be created in Vilnius in the 21st century? We hope, that this process will create the conditions for high quality artworks, one of which will be finally chosen and become the Memorial of Lukiškės Square.

‘To form a monument in words is an ungrateful task’ says architect Algis Vyšniūnas in an interview on the topic of the Lukiškės Memorial. Depending on professional skills, work methods and experience, authors can propose ideas for the memorial in various forms. It can be a text, describing ideas, onto which a concrete monument will be created; a sketch, which reveals both the author’s ideas and artistic interpretation in a visual way; a consistent analysis, which consequently explains decisions, proposed by an artist. Authors are invited to propose ideas in a form of presentation, which suits them best, and can provide additional material if necessary. The jury panel will pay equal attention to all proposals and may approach the authors of the proposed ideas with additional questions before announcing the final result.

In comparison to former competitions of the memorial and reconstruction of the square, this selection refrains from adhering to some of the principals applied in the past: e.g. anonymous proposals and specific limitations relating to the applicants’ professions. Anonymity is not the only way to ensure a transparent selection process and is rather alien to the sphere of arts. The restrictions regarding professions are lifted to open up possibilities to authors from various professional experiences.

The new selection phase of the Memorial of Lukiškės Square also aims to change the tendency of former competitions to inform the public with the results only after the projects have been completed. The main principal of this workshop is a dialogue, which integrates different sides into a conversation from the very beginning and ensures an all-round creative process.

The CAC is hoping for a wide spectrum of ideas and eagerly awaits the opportunity to contribute to their development. For more information about the invitation to participate in the creative workshop for the Memorial of Lukiškės Square, please visit: http://www.cac.lt/lt/other/general/17/8588