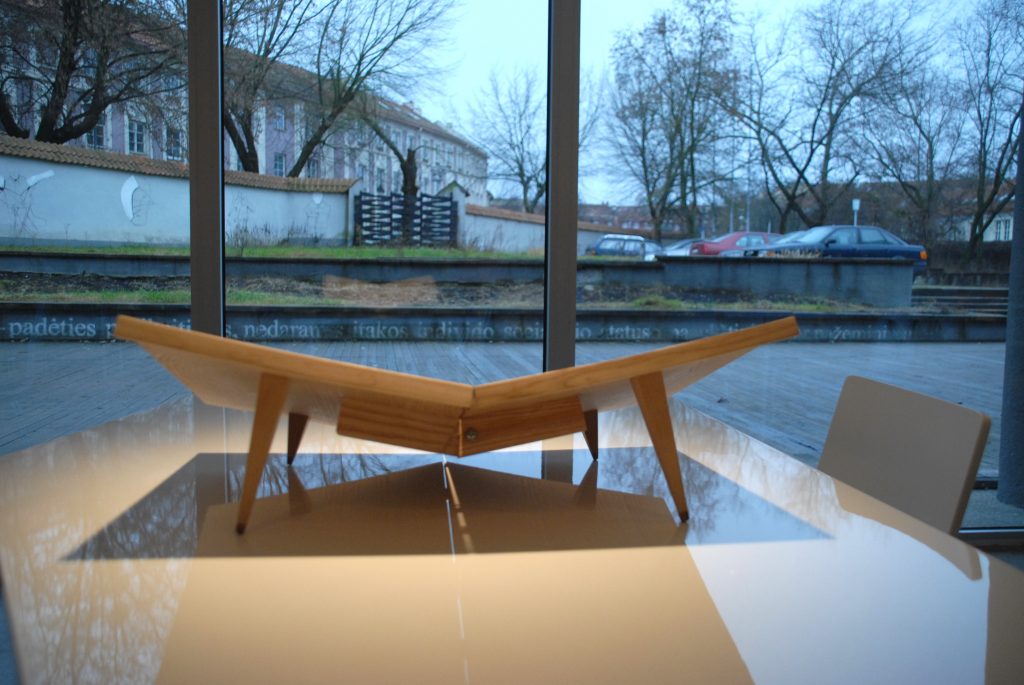 The CAC Reading Room continues its One Book Exhibition series that features a different unique artist’s book every few weeks. The series begins with Lithuanian titles.

Currently on view is a book that Linas Jablonskis created in 1988 and updated in 1992 and 1994, and that served many years as an artist’s sketchbook as well as a catalogue of many other people’s work.

A large proportion of the unnumbered pages of the book are xerox copies bound by the well known master of bookbinding, Ferdinandas Saladžius, which were later filled with layers of drawings, insets, clippings and remarks in several different languages, but mostly written by one and the same hand.

If there is one prevailing theme in the book, it is reproduction. It reveals itself on several levels. Linas Jablonskis, a graphic artist at the time, was interested in mechanical reproduction, copying, repetition, unoriginality and the permanent conundrum of what is worth copying and what is not. In addition Jablonskis is concerned with drawing and writing as tools for memorising and for planning; the book is full not only of sketches but also map-like drawings, musical notations, etc, and even a seating plan for a dinner drawn by Marcel Proust. The aspects of conceiving offspring are of interest too. And thus the narratives emerge and start entwining: interrupting this is a copy of a library card with an English title of a book, A History of Oriental Orgies: An Account of Erotic Practices in the East and the Near EastWar Letters by Jacques Vaché, once an important friend of André Breton, and its only clearly legible letters spell the title LETTRES DU GUERRE; but the title page is borrowed from Creative Writing: A Road Towards Oneself and Others by the German psychologist Jürgen vom Scheidt. Which beginning is more true? Is it war or creativity? Which side of a newspaper clipping is more needed? Two words on one of the white pages in the book say exactly that – ‘both sides’.

The book is presented in the CAC Reading Room along with several other books that have ended up in the same archive box in the course of time.

Thanks to Elena Narbutaitė for the display equipment designed especially for the One Book Exhibition series.

The CAC Reading Room continues its One Book Exhibition series that features a different unique artist’s book every few weeks. The series begins with Lithuanian titles.