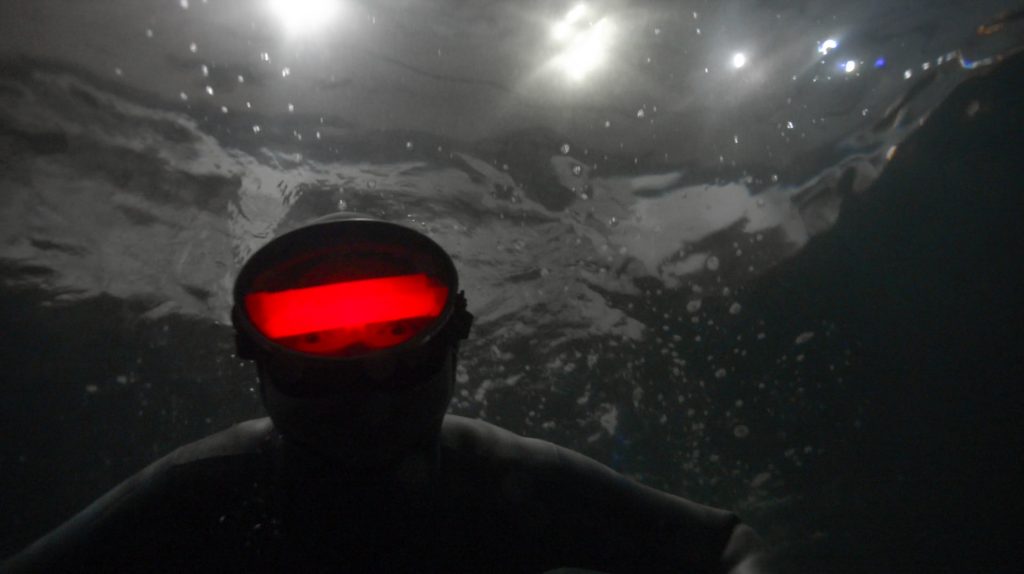 A disturbing, creepy feeling: something gigantic is distorting space itself. Making us see differently. Pulling and pushing objects, gigantic objects: a radio telescope, a mountain range. A hyperobject: something so large, so distributed across spacetime, that we can’t point to it. Something that transcends our sense of dimension and world, and our categories such as “object” and “subject.”
We sense it anamorphically: as a distortion of everything else. As a lens…"

Timothy Morton, "You Are Inside a Wormhole", text for the exhibition “QSO Lens”, 2015.

Emilija Škarnulytė studied sculpture at Brera University in Milan, Italy, and a Masters in Contemporary Art at Tromso academy in Norway. Her films have been presented in many international festivals, such as: Oberhausen film festival, “Hors Pistes”, Edinburough film festival, Sao Paulo film festival, “Message to a Man”, and exhibitions: “Manifesta 10” (2014) and Sao Paulo Biennale (2014).

The opening of the exhibition will take place on Friday 27th November at 6pm. On the opening night, VLBI Music – a realtime algorithmic composition based on signals from quasars – will be played. ØSO – quasar, quasi-stellar radio source. Quasars are massive and extremely remote celestial objects, emitting exceptionally large amounts of energy. VLBI is used to determine the Earth’s exact position and rotation, which is essential for calibrating satellite based navigation and measurements.

The VLBI Music is composed by Oeyvind Brandtsegg (Norway).

On Saturday 28th November, at 6pm: “You Are Inside the Wormhole”, a conversation with philosopher Timothy Morton.

Timothy Morton is Rita Shea Guffey Chair in English at Rice University. A member of the object-oriented philosophy movement, Morton’s work explores the intersection of object-oriented thought and ecological studies. In 2010, he adopted the computer science term ‘hyper objects’ (denoting n-dimensional non-local entities), to explain objects so massively distributed in time and space as to transcend localization. He gave the Wellek Lectures in Theory in 2014 and has collaborated with Björk and Olafur Eliasson. He is the author of Dark Ecology: For a Logic of Future Coexistence (Columbia, forthcoming), Nothing: Three Inquiries in Buddhism (Chicago, 2015), Hyperobjects: Philosophy and Ecology after the End of the World (Minnesota, 2013), Realist Magic: Objects, Ontology, Causality (Open Humanities, 2013), The Ecological Thought (Harvard, 2010), Ecology without Nature (Harvard, 2007), eight other books and 140 essays on philosophy, ecology, literature, music, art, design and food. He regularly writes a blog, which can be found at www.ecologywithoutnature.blogspot.com

The exhibition is supported by:
Lithuanian Council for Culture
OCA