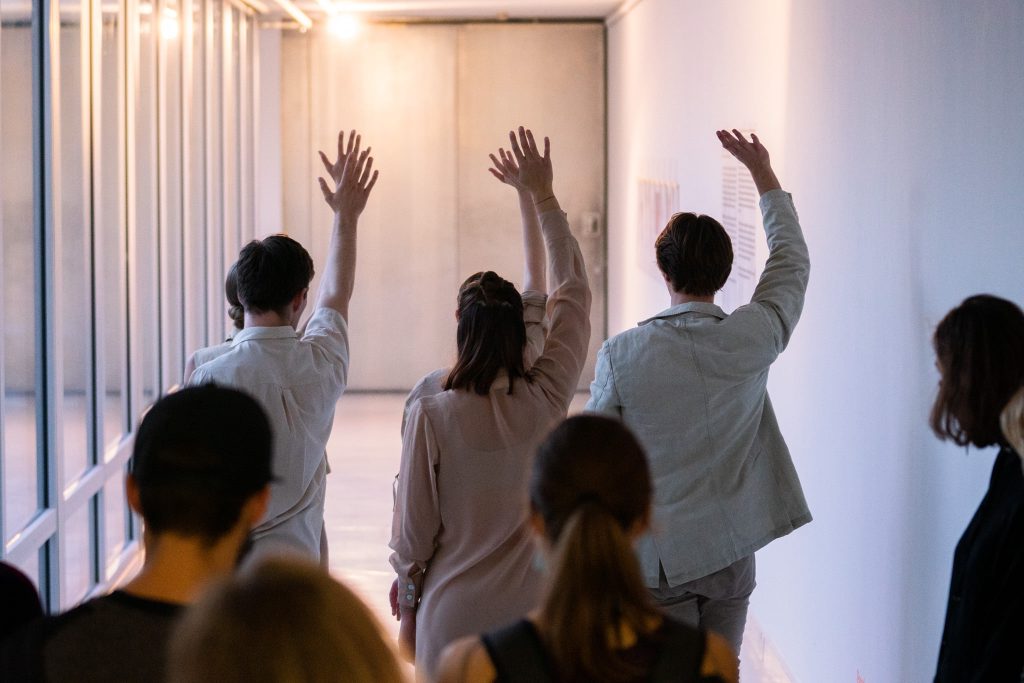 We invite you to the artist Saulė Noreikaitė’s performance Links on Saturday, October 17, from 4 p.m. This performance is part of the “JCDecaux Prize 2020: The Words I Have” exhibition.

According to Newton’s third law, “if one body exerts a force on another body, then the latter also exerts an equal and opposite force on the former.”

Our bodies are not just carriers of a spirit / soul / energy or any other life you believe in; they are not just complex biological mechanisms. They live and exist constantly affected by other bodies, objects, environments, cultures, sounds, smells, actions, etc. They exist only in a ceaseless relationship – a dialogue – with something else; they exist in space and time, in sound and smell. They cannot be defined, described or framed within certain norms or forms, they never stop changing, being, gradually wearing out and renewing, being born and dying. They always exist in communion with Another.

Our physical senses are becoming increasingly numb, beginning to ignore the physical presence of the bodies around us. Although we still synchronously share the same time, we no longer feel the communion in our existence. During the performance, the force of the performers’ bodies, affected by the forces of various other surrounding bodies, allows them to move further. The group of performers becomes one body moving synchronously across space, noticing other bodies, their arrangement in space and the physical distances between them. Synchronized movements become a physical expression of communication between the performers and create a sense of a short-term, ephemeral coexistence.

SAULĖ NOREIKAITĖ holds a Bachelor’s degree in Visual Arts from the Royal Academy of Arts, The Hague, and is currently studying social anthropology at Vytautas Magnus University in Kaunas. Dancing since the age of three, the artists combines, connects and at the same time breaks the boundaries between visual art and dance. Noreikaitė’s works usually take up the format of participatory performances and installations and video works with performative elements. In her creative practice and research, Noreikaitė raises questions about what it means to have a body in the 21st century, how we take care of it and use the physical possibilities of our being.

During the event, please wear protective masks and maintain a safe distance between other visitors.