STAGING of Dexter Sinister’s “The Last ShOt Clock”, a two-sided incantation/talk written to conjure a party inadvertently missed one year ago 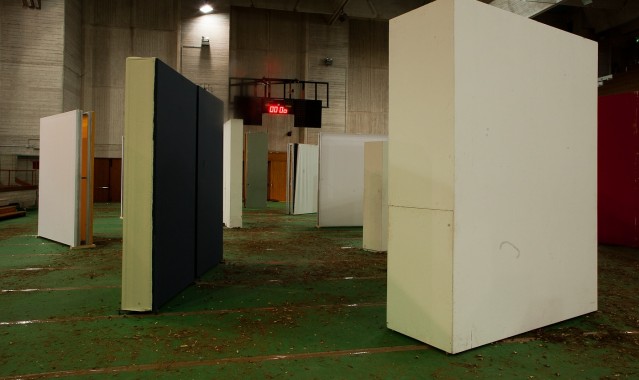 We were asked to participate ‘as honorary Lithuanians’
By Raimundas Malašauskas, who assembled the whole show
In the Brutalist Palasport—a monumental sports hall with
A central court for basketball flanked by rows of concrete bleachers.

Our idea was then to hijack the court’s two opposing scoreboards
And turn them into dual clocks (though you’d never see both at once).
These clocks would count time not by means of normal decimal numbers,
But using big-Os and small-os, that binary character set.

We sent along instructions to the scoreboard’s manufacturer
To burn a microchip that would alter its usual function
And reprogram the system to display this maladjusted time,
Then christened it Work-in-Progress—in order to be continued…

Works in the exhibition:

5. Clock system diagram, Jespersen, J., and Fitz-Randolf, J., From Sundials to Atomic Clocks, 1977, silkscreen on wall.
6. Muriel Cooper, Self-portrait with Polaroid SX-70, c.1982, video imaged and printed at the Visible Language Workshop, MIT. Courtesy of Mass. College of Art & Design.
7. Stephen Willats, The World As It Is And The World As It Could Be, 2006, print on aluminium. Courtesy the artist and Victoria Miro, London.
8. Kazys Varnelis, The Last Shot, 2007–2008, oil on canvas. Courtesy of National Museum of Lithuania.

9. Photograph from the reverse of the instructions inside Ryan Gander’s multiple, Parallel Cards, 2009 (a standard set of playing cards printed on both sides).
10. Dexter Sinister, Naive Set Theory, 2009, proof print.
11. Dexter Sinister, Watch Scan 1200 dpi, 2010, postcard.
12. Dexter Sinister after Albrecht Dürer, Death and the Landsknecht, 1510, as reproduced on back cover of Bulletins of The Serving Library No. 1 (2011).

Dexter Sinister was originally set up in 2006 to model a ‘just-in-time’ economy of print production, counter to the contemporary assembly-line realities of large-scale publishing. Since then the name has variously referred to (1) a publishing imprint, (2) a workshop/bookstore on New York’s Lower East Side, and (3) work produced for and often within art venues. They are currently setting up a longer-term institution called The Serving Library together with Angie Keefer.