The Fragment as a Proverb 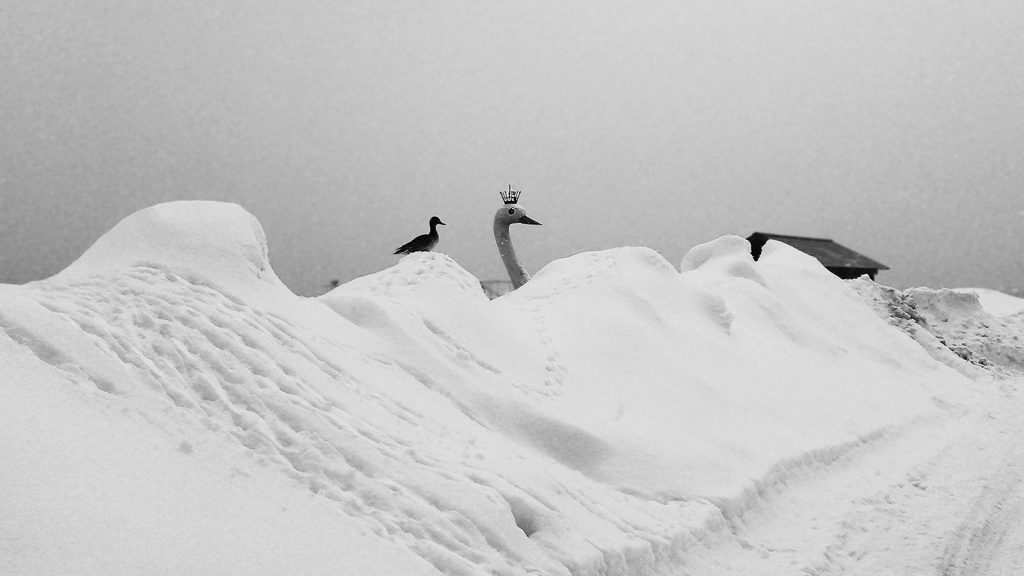 A contemporary art project by Kristina Inčiūraitė, in collaboration with the singer-whistler Mariko Takagi (Japan) and the students of Vilnius choir singing school Liepaitės (Lithuania)
Sound mastering: Alius Bareckas
Organisers: Kristinos Inčiūraitės studija, and the Contemporary Art Centre
Supported by: the Ministry of Culture of the Republic of Lithuania, and the Lithuanian Council for Culture

Kristina Inčiūraitė presents a new laconically expressed art project ‘The Fragment as a Proverb’, together with the Liepaitės girls choir, with its long tradition of singing, and Mariko Takagi, a whistling virtuoso and a champion of several international whistling contests. This is a performative concert, conceptually extended by two video projections.

Reflecting on the state of contemporary culture, the philosopher Bernard Stiegler expands Gilles Deleuze’s idea of ‘control societies’, and points out that aesthetics has become a powerful weapon in economic warfare. Today’s audio-visual technologies, like an instrument of capitalist marketing, control and shape the choices made by society. The philosopher highlights the intense production of temporal industrial objects (like a song or a film that continues in the time of its flow, and coincides with the time of our consciousness), which draw many people under its control, simultaneously listening to the same tune or watching the same film. These are unified experiences, in which a certain ‘symbolic misery’ comes through: our choices and our individual desires are reduced.

‘The most important musical event of the twentieth century was the recorded song,’ Bernard Stiegler points out. In our technologised culture, song recordings have become widespread, and by being constantly repeated, they have become part of our memory. Agnès Jaoui, the screenwriter of Alain Resnais’ film ‘On Connait les Chansons’ (1997), once said that by gathering popular songs for film, she used fragments of songs like proverbs. According to her, the commonplaces rooted in the words of popular songs summarise feelings, and at the same time they impoverish them. By using a reduced form of song, whistling or humming, and by supplementing tunes with moving images, these problems of ‘impoverished’ experiences come into focus in the project ‘The Fragment as a Proverb’.

Here, while Mariko Takagi is whistling and the Liepaitės choir are humming the popular tunes they like, some ‘radioactive’ moments in the daily life of Fukushima and Ibaraki Prefectures and some images of Vilnius streets are represented in video projections. Several details from the films ‘The Sun’ (Сóлнце, 2005, directed by Aleksandr Sokurov) and ‘Repulsion’ (1965, directed by Roman Polanski) are embedded in these videos. Some semantic layers are interlaced here in order to show that the impact of the past and the present, and of reality and fiction, is able to provoke critical thought and waken the consciousness, which is lulled by music and images.
—

Kristina Inčiūraitė (b. 1974) lives and works in Vilnius. During the last decade she has participated in a number of international exhibitions, such as the 15th Tallinn Print Triennial, the 4th Ars Baltica Triennial of Photographic Art, the Prague Biennale 3, the 2nd Moscow Biennale of Contemporary Art, the 9th Baltic Triennial of International Art, and others. Her works have been presented in art institutions such as the Kalmar konstmuseum, the Łaźnia Centre for Contemporary Art in Gdansk, the ar/ge kunst Galerie Museum in Bolzano, the Kumu Art Museum in Tallinn, the Muzeum Sztuki in Lodz, the Műcsarnok in Budapest, the NGBK in Berlin, the Casino Luxembourg – Forum d’art contemporain in Luxembourg, the Pori Art Museum in Finland, the Fondazione Sandretto Re Rebaudengo in Turin, and others. She also participates in international film and video festivals.

A contemporary art project by Kristina Inčiūraitė, in collaboration with the singer-whistler Mariko Takagi (Japan) and the students of Vilnius choir singing school Liepaitės (Lithuania)