XII BALTIC TRIENNIAL: An event dedicated to The Kickstarter campaign of the project ‘Augmented Sound’ by Nick Bastis and Darius Mikšys 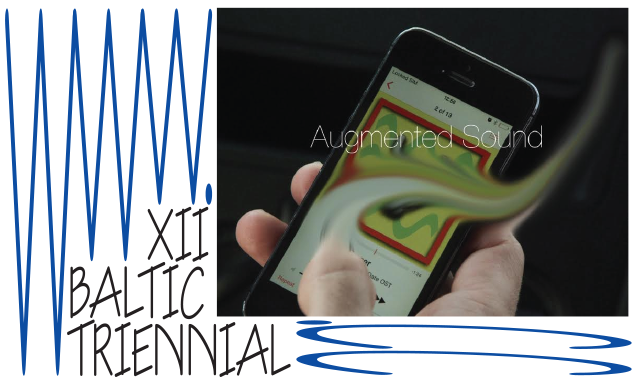 Augmented Sound is an app that enhances the experience of sound in moving vehicles. The artists have set up a Kickstarter campaign to finance its making, and in the meantime the project is presented in the exhibition space in the form of odorous low lying fog.

Please visit the Kickstarter website to learn more about the project and to support it: https://www.kickstarter.com/projects/173114542/augmented-sound

Nick Bastis: I was reading an article today in The New York Times about Chief Keef, a young Chicago rapper, who was banned from performing in the Midwest, so he did a Hologram performance instead, but that too was shut down by the police.

Darius Mikšys: Ha ha, the police in USA are up to date technologically.

N: They said the hologram would cause trouble. It’s straight out of Southpark.

D: It feels like they knew that holograms are coming and they were prepared. Not entirely, sentences are abstract, but values are already installed.

N: Liudvikas and I were once talking about Santa Claus and how in New York City it is now illegal for Santa Claus to be drunk. We were saying how it confirms him as being real when laws are in place to govern him as a real body. Maybe the hologram regulation does something similar. I guess it’s an ontological situation… or like your comments about words, or Schrodinger’s cat, it either outlines that Quantum shadow or just turns the lights on. Which could be devastating for a hologram, no?

D: I’m finding it pleasurable to imagine all kinds of characters, real and real ‘not yet’ fighting for their acceptance. Have you seen this documentary on Pony cartoon fans? (‘Bronies: The Extremely Unexpected Adult Fans of My Little Pony’). It looks like that contradiction between cartoon character and his fan real life character drives the latter’s motive to continue to promote Pony to the realm.

N: The realm being the place the real ‘not yet’ are trying to gain acceptance to?

D: Yep, as if it would be the last and most top level of any PC game.

N: Do you think the ideal outcome for computer game characters in completing their levels is to rise to the level of the accepted real?

D: I’d like to meet a PC game character who (which) would not want that!

N: But what if the laws by which they operate in the game are more interesting than those of the accepted real?

D: So that’s why I would like to meet them 🙂

D: Once I signed a petition for a Japanese guy to enable him to marry Manga character. I hope it helped him (the petition) or it will help in near future.

Virginija Januškevičiūtė: And speaking of Japanese, how does a fundraising campaign translate into a fog?

D: You are right, it is Japanese to Latin translation – it is completely associative. We thought of a bodily fluid idea fixed in the video that we made for the Kickstarter campaign, slowly spreading through the world, entering exhibition space as a mist of abstract and complex possibilities, for visitors to dip their feet in. Faint urine smell leftovers on shoes and trouser cuffs. Here’s formal critique (institutional?) – it’s just to lever some possible euphoric moments of the entire project.

D: Yes, it is something personal potentially becoming public.

Excerpt from an interview conducted by Shama Khanna and published in the XII Baltic Triennial’s exhibition guidebook.