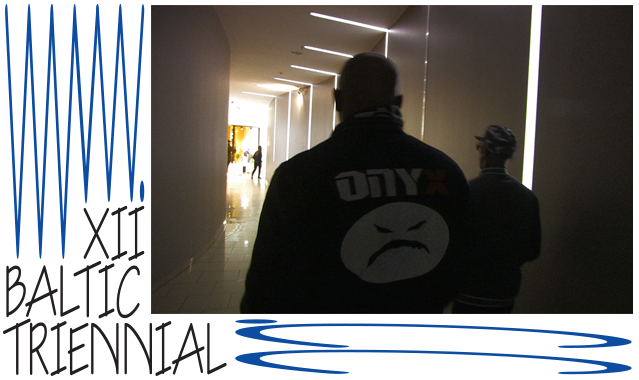 In the film the traveller’s role is taken by members of American hardcore hip hop group ONYX, whose music played in the background of Vilnius street wars just a few years after the collapse of the Soviet Union, and whose emblem, tagged any time between then and now, marks many walls in Vilnius to this day. New York rappers drift through the city, wonder, make choices, recognise some things and are sometimes recognised, too. “It’s almost like LA right here”, says one of them in a hotel bar; “this view and I take a picture of the picture”, the other pays respect to the panorama of Vilnius after snapping a picture of a photograph of Three Muses by Stanislovas Kuzma, displayed in the bar’s corridor. The film’s slow pace does not require high standards in regards to the selection of subject matter. The rented car reiterates the myth of a collector on a small boat making its way through remote rivers.

In the XII Baltic Triennial film is accompanied by an essay by art critic and curator Anders Kreuger, published in the exhibition guidebook. After the premier the film will be on view at CAC Cinema throughout the exhibition.

The film director will be present at the event. Admission is free of charge