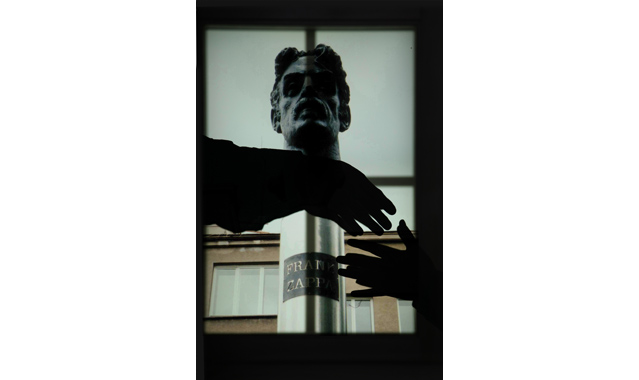 Place: Square on the crossing between K.Kalinausko and Pylimo streets, Vilnius

And the fog gets so thick
And the facts disappear

What will you do when the label comes off,
And the plastic’s all melted,
And the chrome is too soft?

Many of Zappa’s lyrics revolve around the dematerialization of spatial and temporal relationships, which perhaps came to a head both poetically and literally in his anti-authoritarianconcert in 1991 in Prague: Adieu Soviet Army, marking the end of the Soviet empire as it vanished behind the borders of Russia.

It seems most appropriate to celebrate this effort by holding an event in which the renowned Zappa monument in Vilnius (erected by a community of artists in1995) follows the path of the lyrics and itself vanishes, whether through being moved, seeing a void, deploying musique anti-concrète or any other related methods.

Also in keeping with Zappa’s approach of "conceptual continuity," by which he meant that any smaller project is part of a larger evolving effort, this Zappa event in Vilnius is the starting point for the Active City Cancellation project, which aims to dematerialize parts of, or even entire cities in several countries around the world.

At first glance, the goal of dissolving masonry, concrete and material objects into thin air, as a kind of reverse engineering of our compulsive and spreading urbanization, could be framed as an act of ‘deep ecology’, designed to counteract the so called pathological infestation of humans on earth. Certainly the larger project goal of Active City Cancellation would appear to be in accordance with this aim, as cities are dissolved one by one, zone by zone, landmark by landmark: erased from the collective psyche.

But there is actually a more fundamental goal to this experiment, which is to preempt our own progressive dematerialization, as our friends disappear into the social network, our urban experiences of shopping disappear online, and our conversations become little more than son-et-SMS. Just as the hard science of quantum-teleportation was preceded by the Star-Trek transporter device, so our own inevitable physical dematerialization, as well as that of our homes and cities is preceded by Active City Cancellation. Within this larger context, cultural practices such as these, that explore ‘boundary’ notions, may be seen as a lubricant to aid with the evolution of individual ideas and incrementally, the migration of the full envelope of collective consciousness.

The projects consits of a targeted collection of inductions, stipulating a hypnotic feeling and offering to the preselected group of volunteers the experience of transformation and metamorphoses. Zappa Project is part of the exhibition Proteus curated by Virginija Januskevciute and Kristupas Sabolius for Lithuanian Art 2012.

Marcos Lutyens is based in Los Angeles, a stone’s throw away from Frank Zappa’s former home. He is currently working on a project in collaboration with Raimundas Malasauskas and Sissel Tolaas at dOCUMENTA 13, called Hypnotic Show.