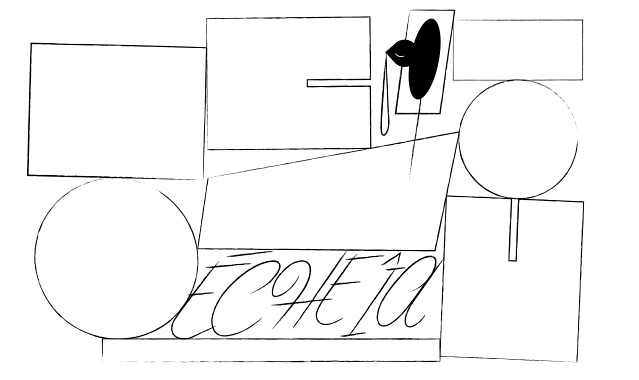 The Contemporary Art Centre is proud to present “Ēcheîa”, a sound installation by the composer and sound artist Arturas Bumšteinas. It is the artist’s first show at the institution in which a considerable portion of his artistic career started in 2002 and continued back and forth to this day. In a way, his practice has been situated in-between the fields of contemporary art and music ever since – one can often hear people talking about shows that Bumšteinas participates in as being works of a musician, and yet he employs pure sound, composing it in the manner of a conceptual artist. Therefore, the show addresses a very specific set of questions, such as: “How does sound function as sculpture?”; or “Is the fate of sound pieces necessarily confined to a box called a “speaker”?”; or “How do we greet a viewer, so reliant on her eyes, with a piece of sound that cannot be grasped all at once? Considering that time is money, is it a justified expense?”; or “How do we tell a manifold and non-linear story if time is continuous and flows in only one direction? And which one is it?”.

For the show Arturas Bumšteinas has invited five sound enthusiasts and audiophiles – Gitis Bertulis, Antanas Dombrovskis, Ričardas Dubaka, Rytis Urbanskas and KALA Soundsystem – to design a speaker each. The speaker itself is not a complete work, but rather a part of a bigger, even if hypothetical, sound system: one is tweeting with nothing beneath it, the other buzzing like dancing bees, the third one is bassy like the cheeks of Balzac and the fourth – a middle-man, a clerk who knows what the others possess and how to tinker with that; I forgot about the fifth, but can feel it piercing through my bones.

The artist considers these speakers as birdhouses that are yet to be inhabited with sound. But there is a lot more that they could fit. Each engineer has provided the artist with pieces of sound, usually recorded or gathered by themselves, corresponding to the speakers. Using these samples, Arturas Bumšteinas composed a specific audio track, which can be played only through its corresponding speaker, turning it into a sound sculpture. These sculptures, collaborative pieces in their own right, become a chorus when combined, interacting with and complementing each other and turning the room into a vessel of amplified and resonating sound: echeia.

As a result, the sound-emitting speakers in the show turn not only into mouths, but also ears, allowing the listener to experience and participate in a carefully crafted acoustic experience, mediated by the work of the aforementioned artisans, the artist and the listener herself.

Arturas Bumšteinas is a composer/sound artist working in the fields of electro-acoustic and instrumental music, radio art, installations and experimental electronic music (under the pseudonym Refusenik). He is the founding member of Quartet Twentytwentyone, Works & Days, Zarasai and Wolumen ensembles. Since the year 2000 he has collaborated with many international musicians and artists. His interdisciplinary projects were presented in dozens of events around Europe. Festivals where his music and art projects were showcased include The Holland Festival, Sensoralia / Romaeuropa, Angelica, Vilnius Jazz, Kody, Skanumezs, Cut & Splice, amongst others. His music is published by labels such as Bolt, Cronica, Unsounds, Con-v, Sangoplasmo and others. In the year 2013 he was awarded the “Palma Ars Acustica” prize for radiophonic arts. Bumšteinas is selected as an artist-in-residence at DAAD Berliner Kuenstlerprogramm for the year 2017.