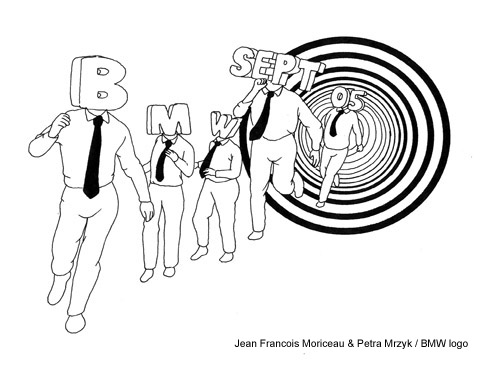 Opening Events of The IX Baltic Triennial of International Art

For the duration of the exhibition all press releases and documentation were gathered at www.ultimiere.com (currently relocated at www.rye.tw)

Additional events of The Baltic Triennial 33 1/2 in London were announced to www.ica.org.uk.

Please click here to read more about the Triennials’ set of publications – The Black Box.
The Black Box is the charred remains of the explosive IX Baltic Triennial of International Art, BMW (Black Market Worlds). With over 40 participants in and around the Contemporary Art Centre, Vilnius and schizophrenic alter-ego at The Baltic Triennial 33 1/2 at the Institute of Contemporary Arts, London, The Black Box does not document, but captures activities spun off from BMW. From texts on subjects from transparency to zombies, from photographs of ghosts to tapped private conversations and space for the readers own thoughts, The Black Box provides a shadow world with its own logic and its own chaos.

Alex Bag presents The Coven Services for Consumer Mesmerism, Product Sorcery, and the Necromantic Reimagination of Consumption. (New York)
The Earth powers are back to the CAC. Ask Artūras Raila for a map. (Vilnius)
Bernadeta Levule sends love from Belarus! (Vilnius)
Brice Dellsperger devours you. (Paris)
The Baltic alpinists have been shot by Bruno Serralongue, but everyone survived. (Paris)
Cara Tolmie is the best friend of the DJ Jimi Lopez. (Glasgow)
Carey Young will play the revolution live! (London)
Christelle Lheureux & Apichatpong Weerasethakul declare that ghosts from Asia are alive and melodious. (Paris, Bangkok)
Daniel Bozhkov’s new manly fragrance, Eau d’Ernesto, soon at a door next to you in Vilnius! (Colchester)
At night, David Küenzi drives in a flash bumping at peculiar exchanges. (Palermo)
Deimantas Narkevičius knows if the Matrioshkas were twins from the beginning. (Vilnius)
Deric Carner was not on the list. (Paris / Rotterdam)
Donelle Woolford ghost-authors assemblages of wood cuts and other found materials. (New York)
Drummed to death by Drum Ecstasy. (Minsk)
Emily Cullman tells you why she chose to be an artist. She sounds like somebody else. (Los Angeles)
Gabriel Lester found it on Google. (Groningen)
Do you like the new outfit of Gintaras Makarevičius? (Vilnius)
Hinrich Sachs wants you at the cannibal gala at www.secondlife.com. (Abidjan)
Ghosts re-stitch Ignacio Gonzalez Lang’s KKK garb. (New York)
Ion Grigorescu saw them from underneath the covers. (Bucharest)
Jean-François Moriceau & Petra Mrzyk, astounding drawing machines that are faster, stronger, and smaller than ever before! (Paris)
Jeppe Hein dresses the BMW in mourning attire. (Copenhagen/Berlin)
Joachim Koester stayed in the Room of Nightmares. (Copenhagen/New York)
Find the buried sculpture of Joe Scanlan, and go to London with the ghosts. (New Haven)
Don’t miss Jonathan Monk’s appointment. Until then. (Berlin)
The wild boars of Juozas Laivys can open any door. (Vilnius)
Karl Holmqvist walked, wrote, spoke, and arrived at new ways of doing nothing. (Stockholm)
While the dog of Kristina Inčiūraitė didn’t bark at you, it read your mind and passed those thoughts along. (Vilnius)
Kyle McCallum said he published a magazine, but no one could find it. (Glasgow)
Laura Stasiulytė was at your party, but you didn‘t notice. Don‘t sleep in the kitchen anymore! (Vilnius)
Loris Gréaud traps us in the wiretap. (Paris)
Maaike Gottschal & Natascha Hagenbeek enlist and decline black versions. (thisisnotparis.com)
Mariana Castillo Deball goes on with micro narratives as possible covers for an open-ended life. (Tlacotalpan)
To discuss if Robert Barry’s secret is still alive, Mario Garcia Torres convenes a class reunion at NASCAD, up North in the Western Hemisphere. (Los Angeles)
Markus Schinwald sent high-trafficked illicit portraits. (Vienna)
Matthieu Laurette gets Hollywood stars to call you! Are you on the list? (Paris)
Melvin Moti kissed Katie King back from hell and begged for a new appearance. (Rotterdam)
The car of Mindaugas Lukošaitis was left in front of the CAC. Who drew its tail? (Vilnius)
Mirjam Wirz became friends with policemen and pirates dinning at the same table. (Vilnius)
Professional spiritualists from six planets are searching for Olivia Plender. (London)
Pablo Leõn de la Barra’s International and Men’s Vogue premiere this month! (London)
PB8 called 25 taxi cabs from Vilnius to London. Hear them coming. (Vilnius)
Reena Spaulings’ money paintings disappear. (New York)
We lost Rene Gabri in Ultimiere. Try to get there. (Tehran)
Roberto Cuoghi, sounds good. (Milan)
Ross Cisneros, the boxing medium weight champion of the Black Market Worlds. (New York)
Casio, Sheraton, Seiko, and other familiar names appear in Sean Snyder banquet of image-makers and takers. (Berlin)
A collection of deadly devices was attributed to Teresa Margolles. (Mexico City)
Vidya Gastaldon provides eggs and cloud-like ghosts from somewhere, something spiritual and occult in Switzerland. (Geneva)