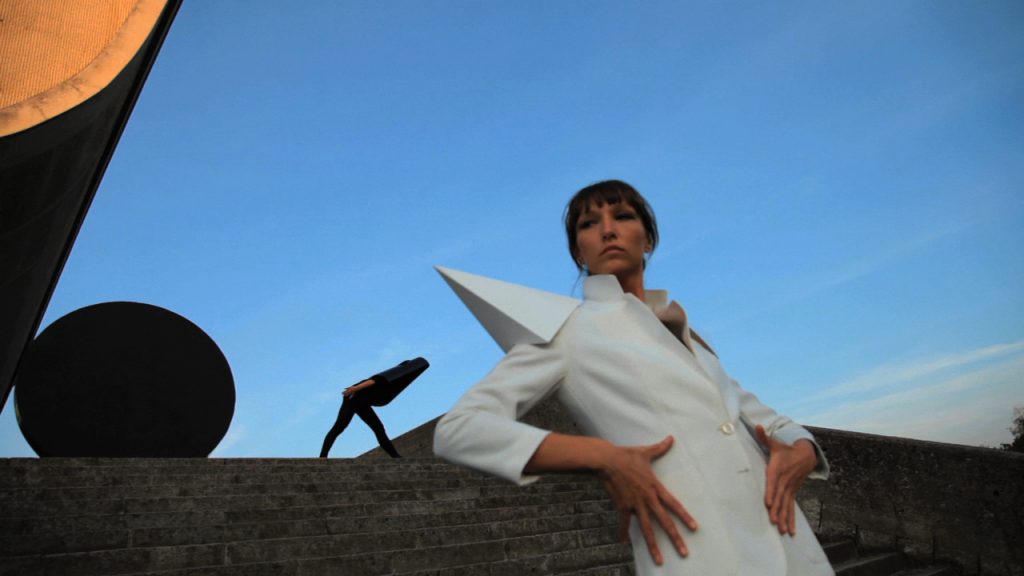 Coro Collective* is a catalyst known to transform any public space into a multi-event, distributing roles of cameras and participants in any given space. ‘Vocabulary Lesson’ is one such extravaganza; a music video that draws from the histories of dance, music and architecture.

In Coro Collective’s video, the subculture of African Americans of the 80s meets Soviet modernism, with the Vilnius Sports palace serving as a backdrop for the Coro Collective’s version of vogue. The series of highly stylised poses are performed in costumes influenced by Tristan Tzara, and the resulting video could lead to an interesting conversation between Gertrude Stein, Miles Davis and Frank Zappa, all of whom are known as the authors of the phrase ‘Talking about music is like dancing about architecture’.

Vogue is a highly stylised modern dance that involves ‘Egyptian’, silhouette-oriented poses drawn from modelled fashion photographs and angled, gymnastic body movements. It emerged in New York’s gay and transvestite scene and was named after Vogue magazine. One of the main ideas holding this scene together was the continuously and ritually celebrated belief that one can become whomever one wants to be (a movie star, a photo model, or a regular school girl), because the social status largely depends on the looks. This logic–let’s call it vogue logic for now–was important for the ‘Vocabulary Lesson’, the video clip as well as the (learning) song. If a person can transform into a letter, it is probable that a letter can become something else as well, and it is possible to (re)create buildings using musical notations instead of construction drawings, isn’t it? ‘Vocabulary Lesson’ can be read as a tale that deconstructs the figures of architecture turning them into sphinx-like letters that are ‘practicing their perfection’.