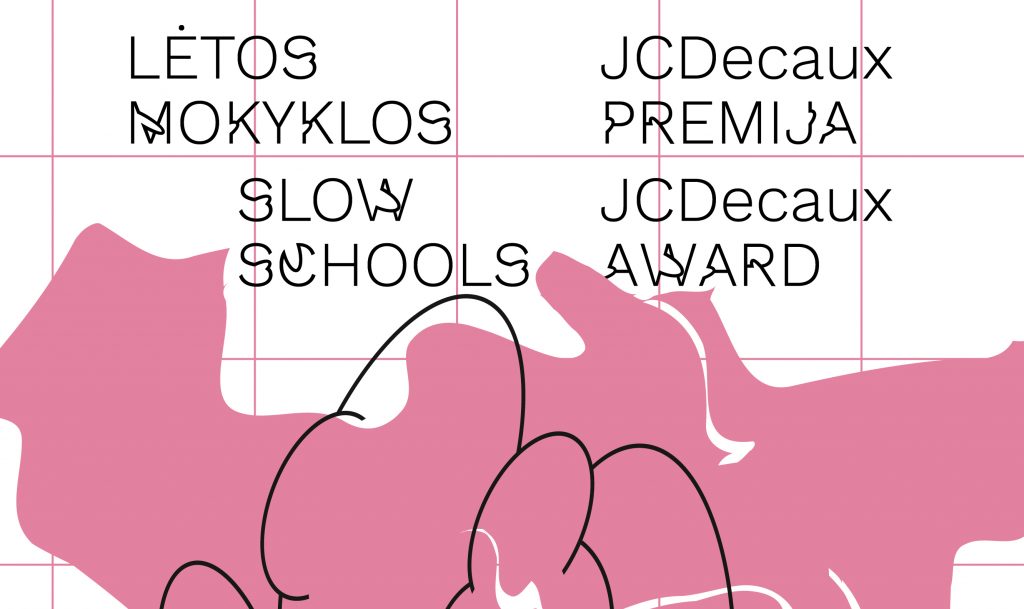 “Slow Schools” is already the second exhibition from the cycle of yearly exhibitions entitled “JCDecaux Award”, initiated by the Contemporary Art Centre together with “JCDecaux” in 2016. The cycle aims to present Lithuanian young artists and encourage production of new artworks, produced by the Contemporary Art Centre. On the 14th of December the international board will announce one artist from this exhibition, who will receive an award of 3000 euros.

Between the 19th of June and the 7th of August young artists were invited to send their proposals for new artworks answering to the guidelines prepared by exhibition curators. More than 40 applications were presented for the open call. On the 3rd of September five artists or artists’ collectives were selected to participate in this exhibition.

The artists were invited to create new pieces reflecting social phenomena, researching, how artworks can comment about old structures of society or become new ones themselves, tell stories about identity, the everyday, the body or become a pretext for creating new stories of the kind.

“Slow Schools” is the exhibition of five artworks about a time, when originality is a resource of a constant remaking and a value is determined by the amount of copies and remakes as well as the speed of their dissemination. These artworks comment recent popular culture and art history, actualise problems identity of an author and individual artwork, but also invite the return of the intimacy of a gaze, where conclusions, manifests and statements lose their importance, giving space to dialogue and hesitations, details and gestures that are not noticed at once, as well as accidentally recorded eventualities. “Slow Schools” present continuous individual learning processes, techniques and habits, that cannot be summarised into one topic or field, but raise the question: what was the old school like and what will become of the new one?

The result is a fluid exhibition in which artworks do not always have a fixed position, constantly changing their place and changing themselves. This way it reveals tensions between different artistic means of expression of the participants, their experiences and attitudes to problems, which may look similar only at the first glance.

Armen by ANDRIUS ARUTIUNIAN is based on music, created by popular music producers of the Armenian diaspora. Because of the Armenian Genocide and the emigration waves that followed it, nowadays Armenia has one of the biggest diasporas in the world. Audio and video pieces created outside of Armenia are recomposed, the fragments of pop and disco music from the vinyls of 1970s–1990s are juxtaposed with textures, consisting of noise and glitches. The audio part of the piece is presented as a vinyl, thus returning the musical material to its original analogue format.

The continuous painting series Heart Matters by RŪTENĖ MERKLIOPAITĖ consists of four pictures from the cycle Christina and three figurative pieces from the cycle McQueen. Paintings Christina reflect the author’s creative method, when an artwork begins as an abstraction, but in the process of painting gains motives of some objects. “Christina” may be a coat of arms, an arch, an outline of a portrait – the artwork has a potential of an emerging figurative image, which the author tries to grasp without making the image concrete. The pieces from the cycle McQueen are repainted photographs from different collections of the British fashion designer Alexander McQueen. In these works, one can see motives from traditional painting genres – portrait, interior, equestrian. The painter appropriates certain images and moves them to the field of painting technique – costumes, interiors and objects turn into gestures, colours and touches.

The installation Session by VIKTORIJA DAMERELL presents an antagonistic attitude towards classical representation of a human body. Classical standard of body image is a physically trained, resting body, the vitality of which is represented in the hard material like stone or metal. Session lacks this kind of body; instead it presents the cycling-simulator and a never appearing body image in a dark, empty space of a TV screen. The piece comments on the contemporary cult of body perfection and its influence on how humans perceive themselves, when a body does not present individual deeds any more, all bodies are made similar through a neurotic training in artificial conditions while aiming at a temporary ideal.

In the piece Emotional Trilogy AUSTĖJA VILKAITYTĖ combines the genres of dance, performance and installation. In the performance cycle, the structure of which is loosely based on the antique drama theatre, the artist uses images and motives from Lithuanian ethnography and contemporary popular culture. Personages from different time-spaces meet in the piece: Eglė the Queen of Serpents, Antigone, the warrior princess Xena, Ruki Vverh and others. The performance cycle Emotional Trilogy is extended into the continuously changing installation, which gains new features and functions in time. The artist comments about the static conception of time in the epic genre and the dominance of male personages in it – by using emotional and erotic “logics” she turns the usual power relationships upside-down.

Young performance artist ANTANAS LUČIŪNAS and graphic designer and publisher MONIKA JANULEVIČIŪTĖ work as an artists’ duet. Their piece Girl on Fire, performed by five personages, takes place in the world of a recently published graphic novel “The Great Outdoors” – in the green isle between two traffic lanes, where personages face the lancinating collective reality. In the exhibition the performance is perceived not as a stable, integral installation, but is experienced through many objects, located in the North Hall and other spaces of the Contemporary Art Centre – fire hoses, smoky lamps and the smell of fluttering wires in the air. 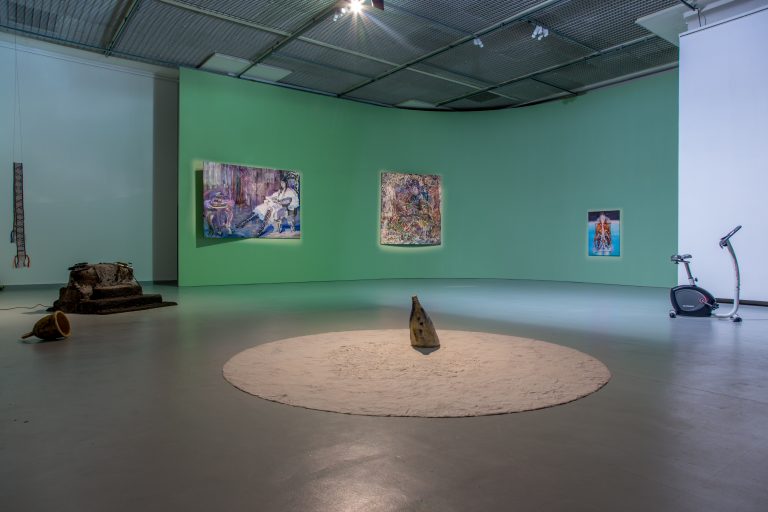 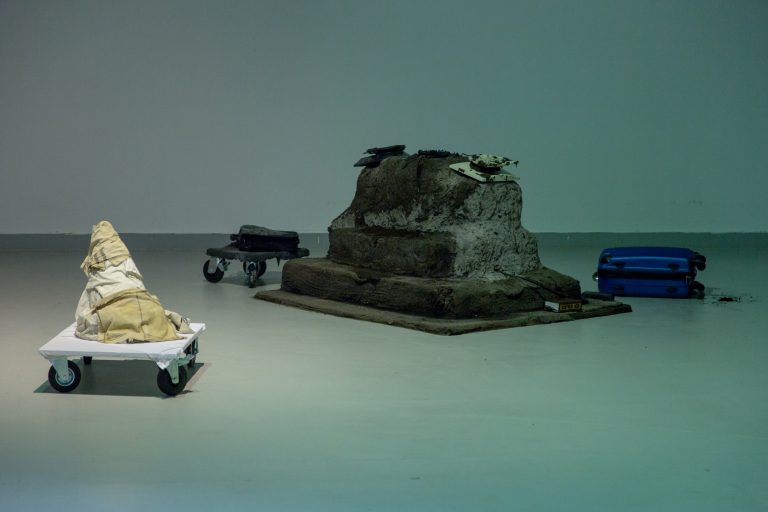 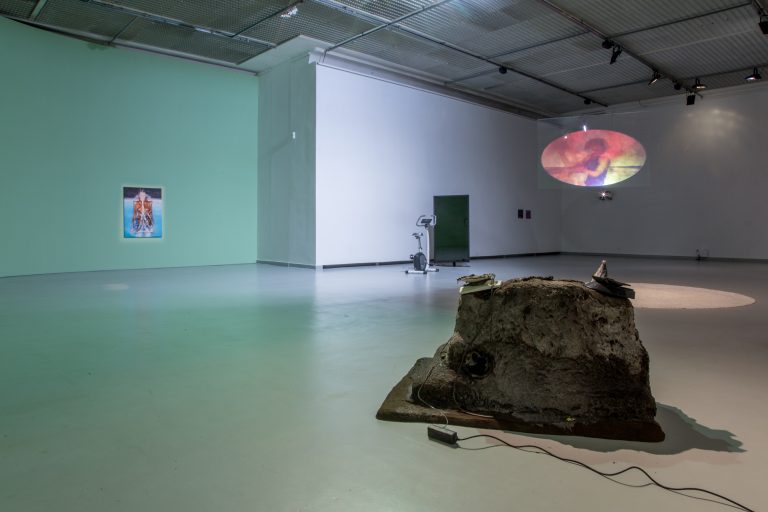 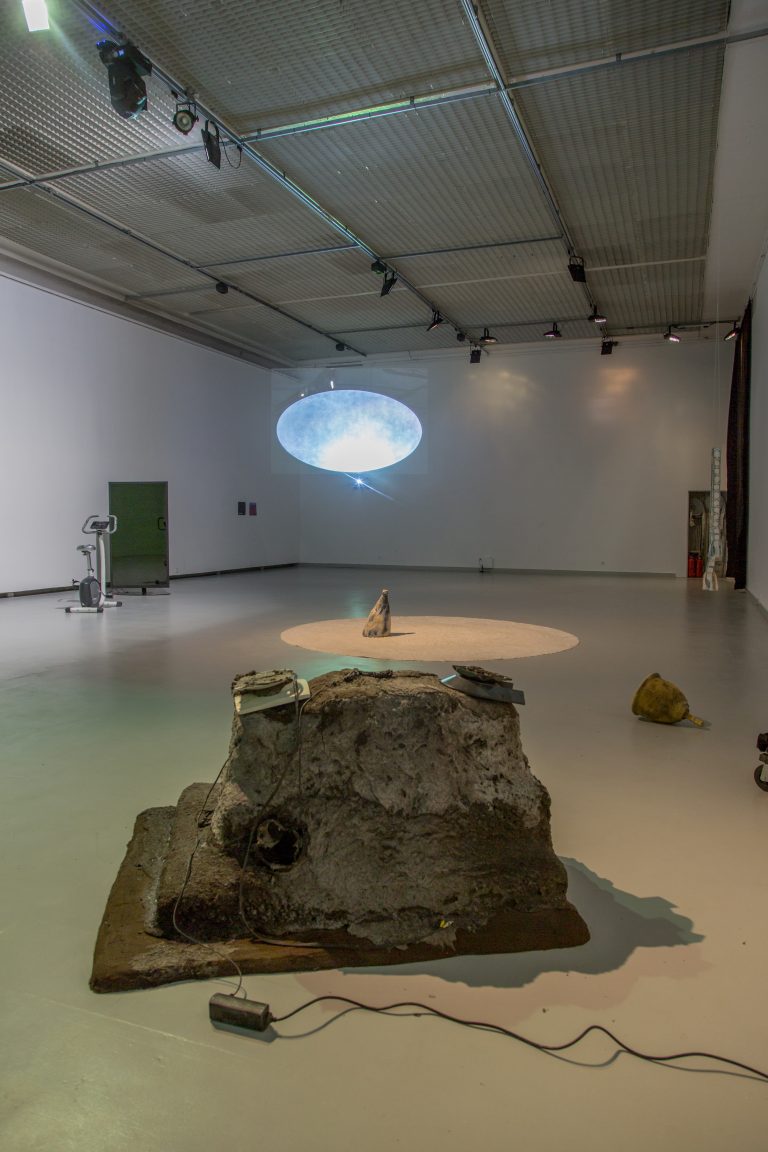 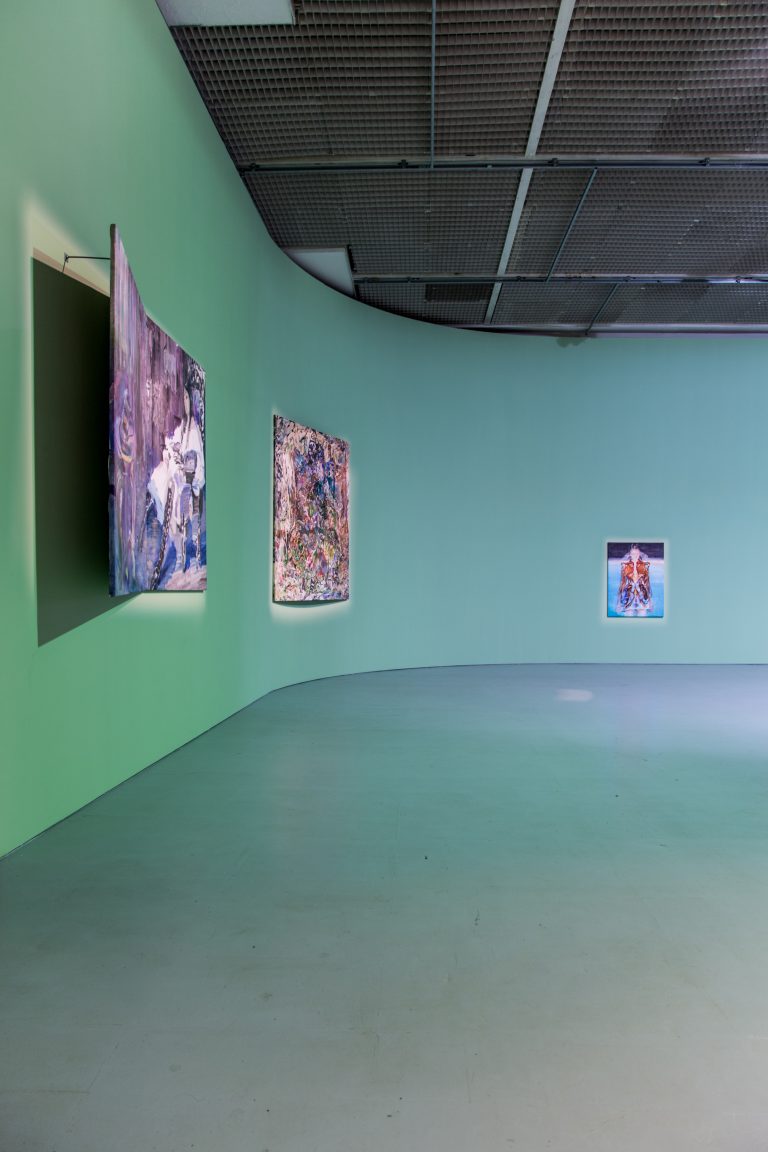 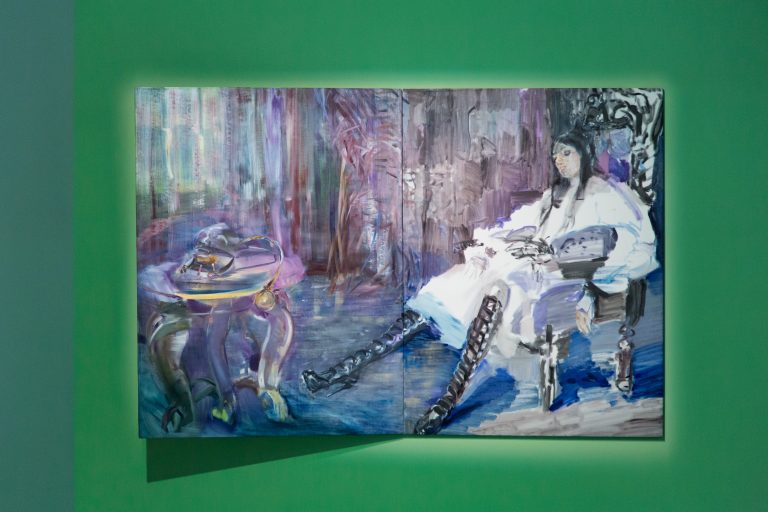 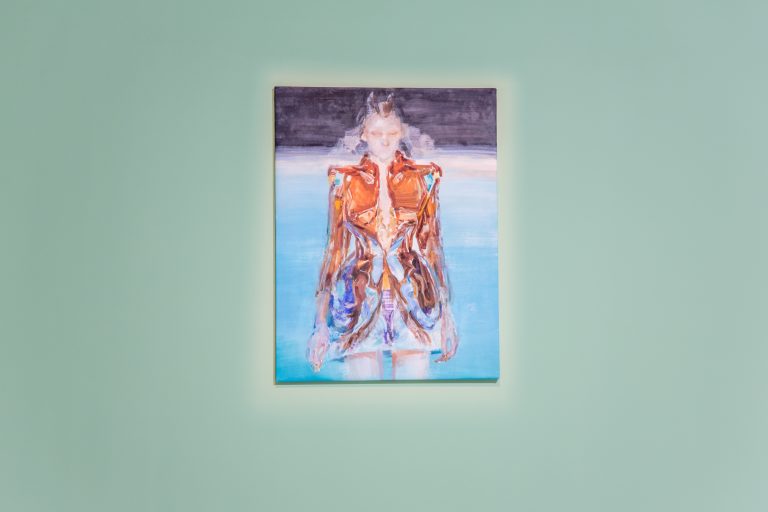 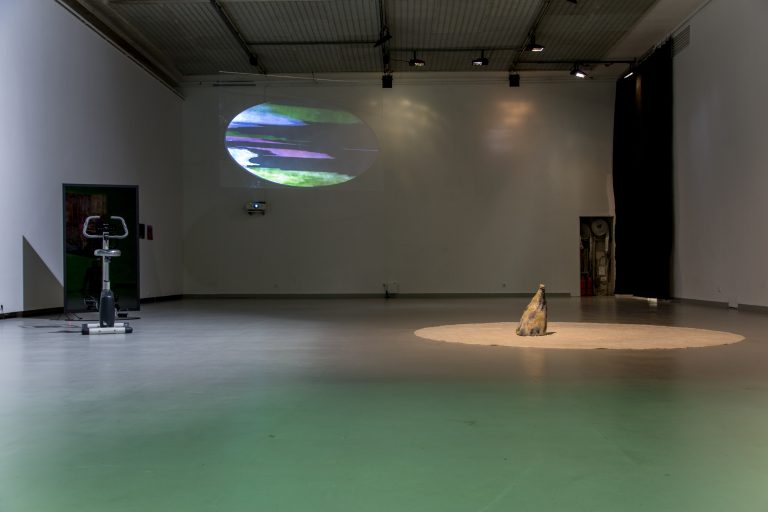 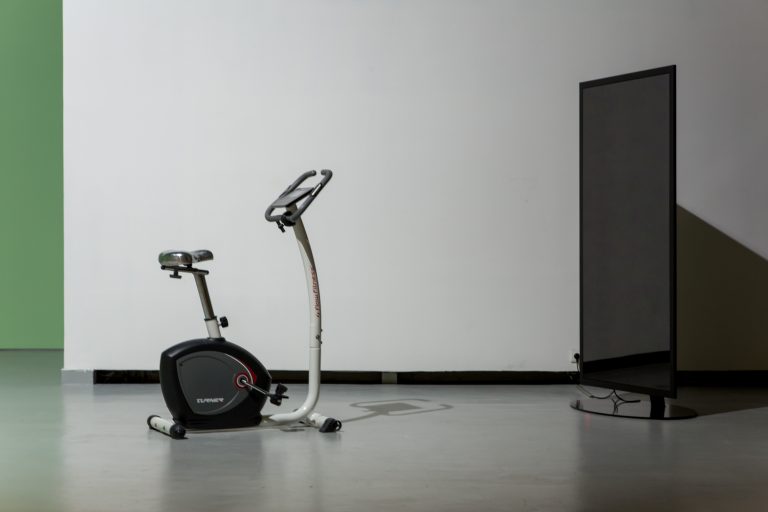 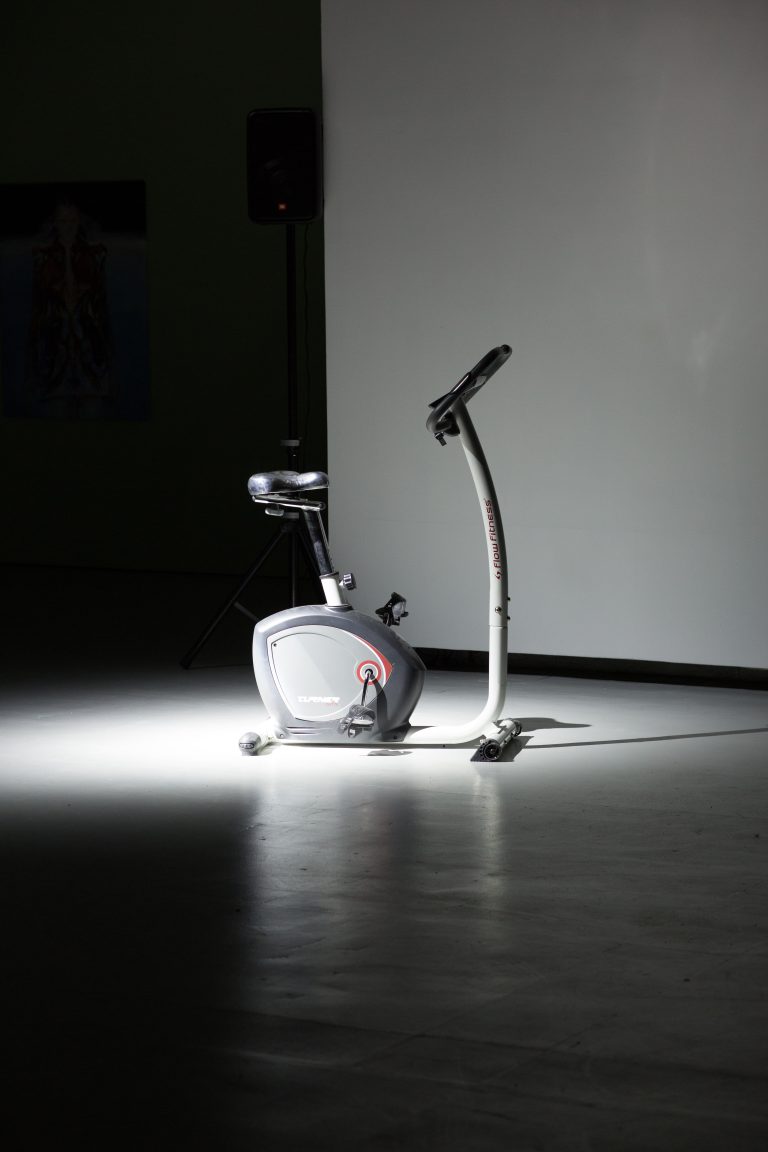 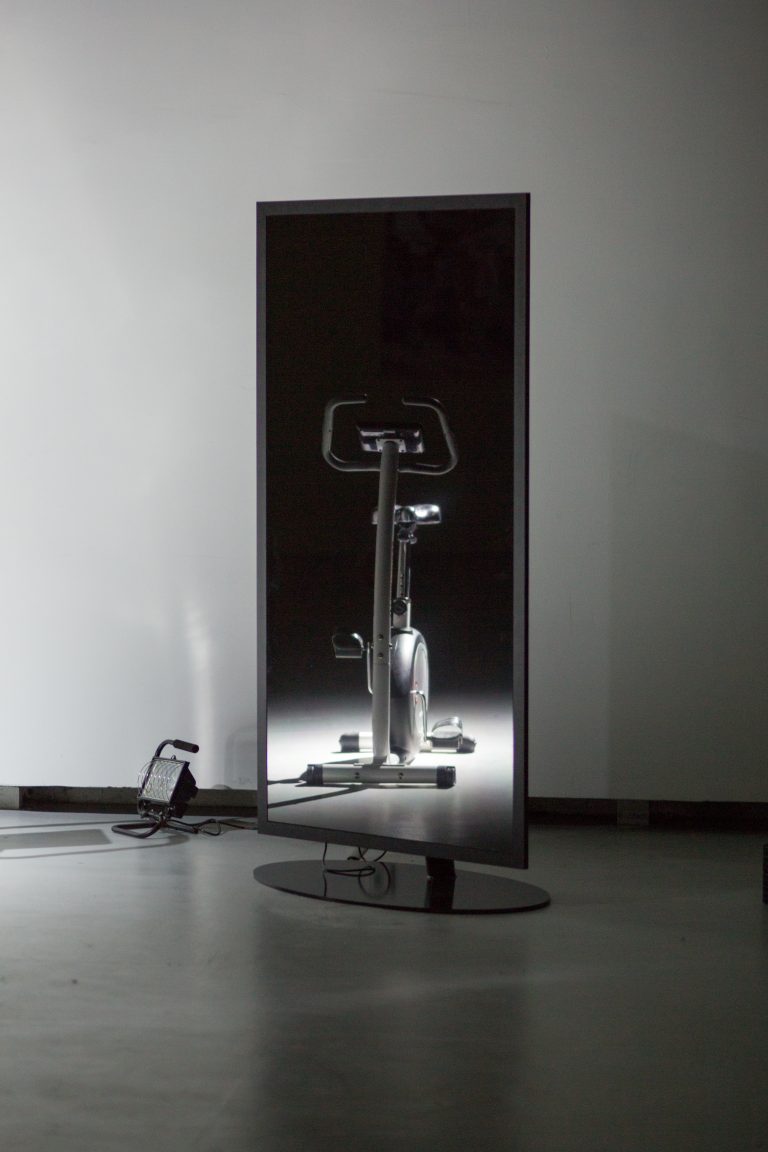 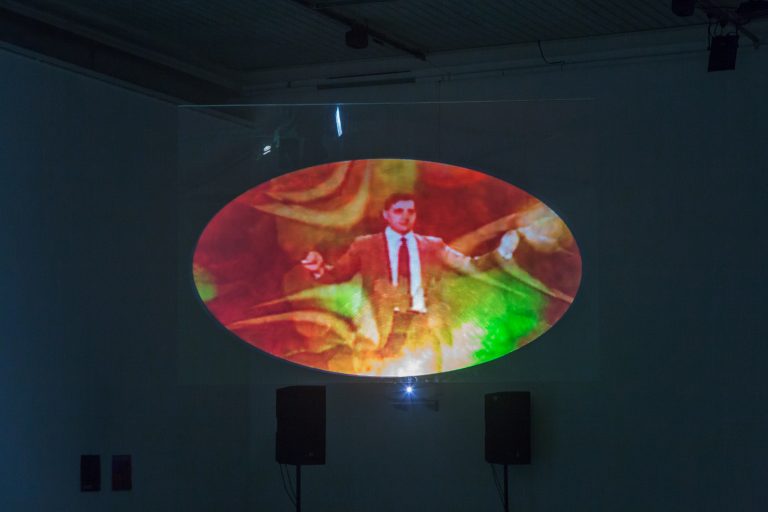 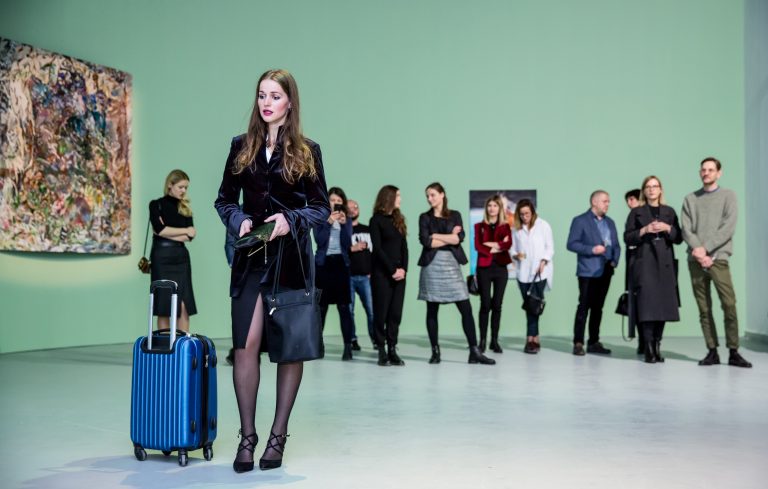 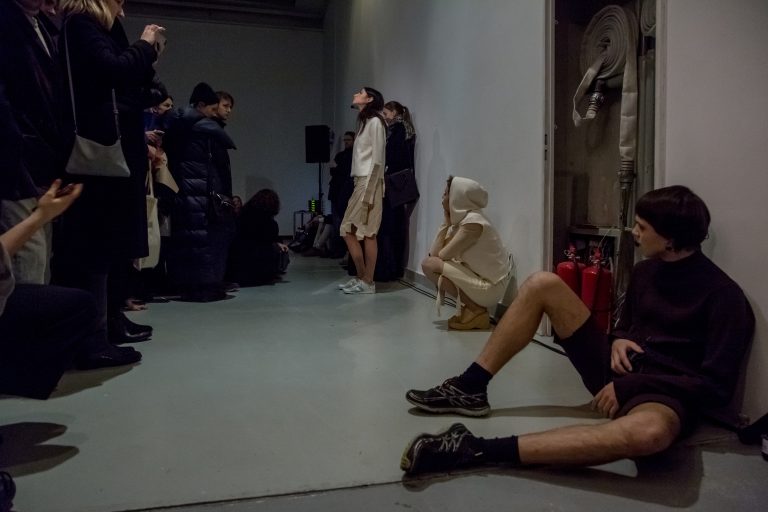 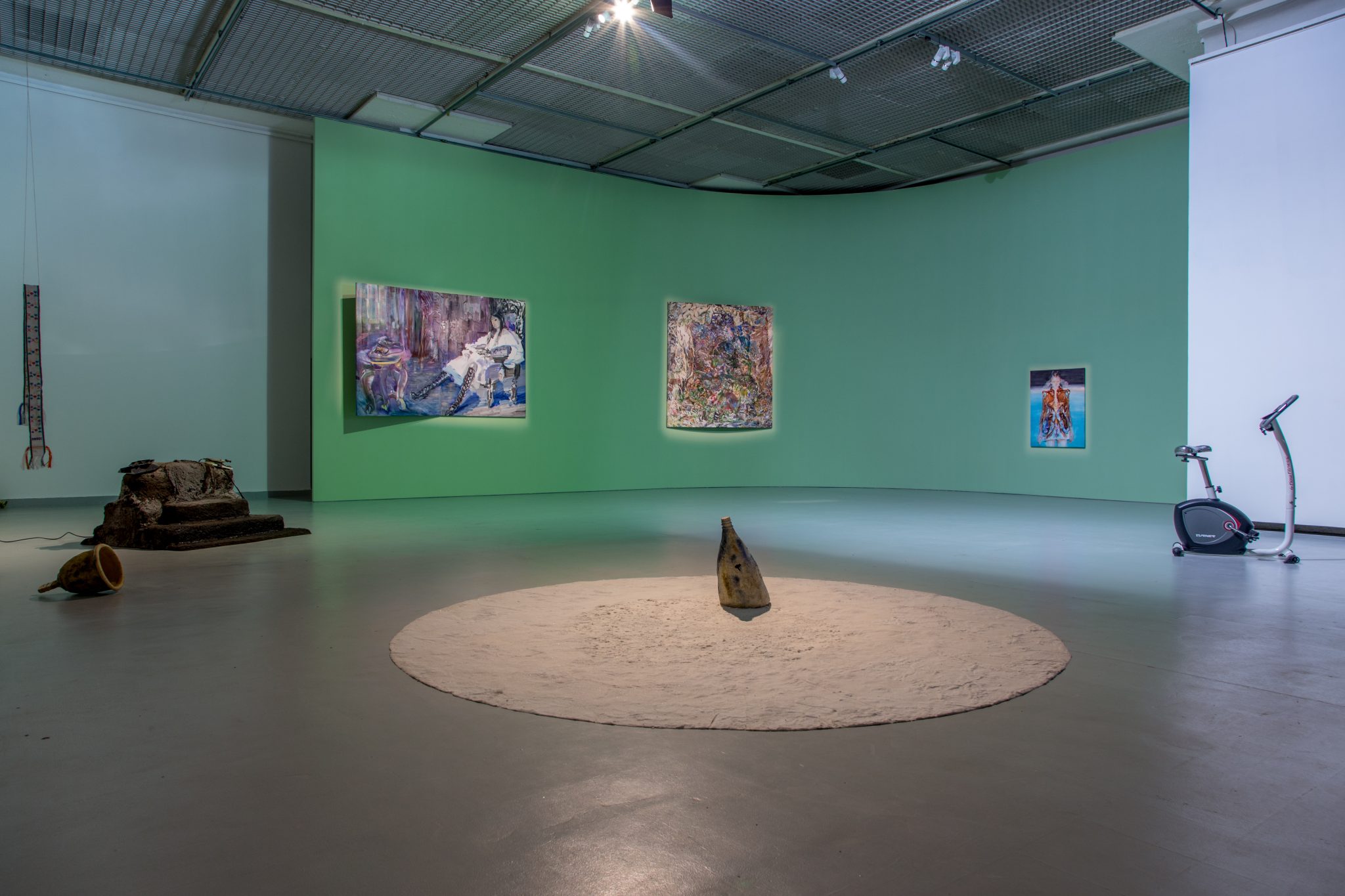 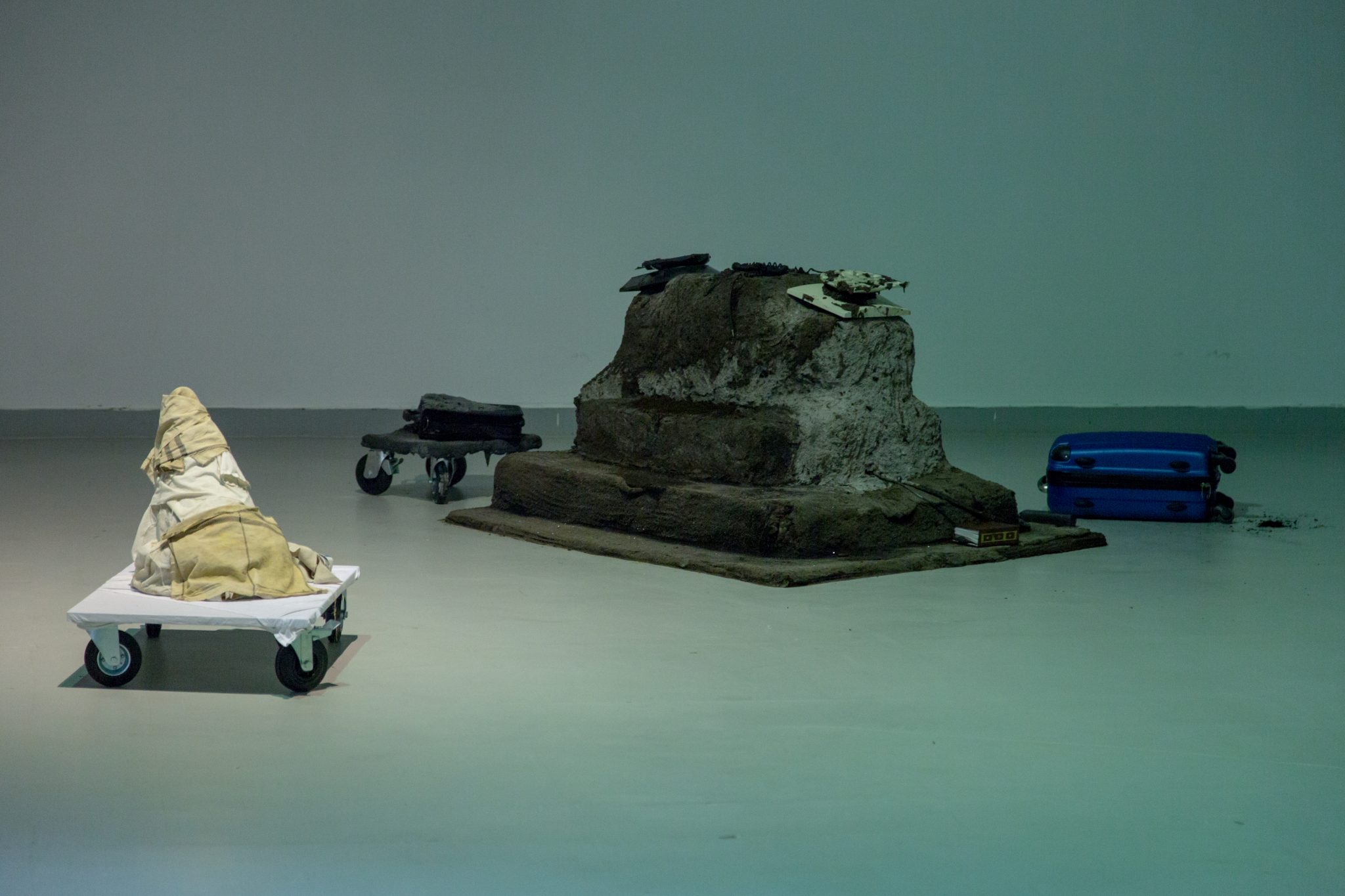 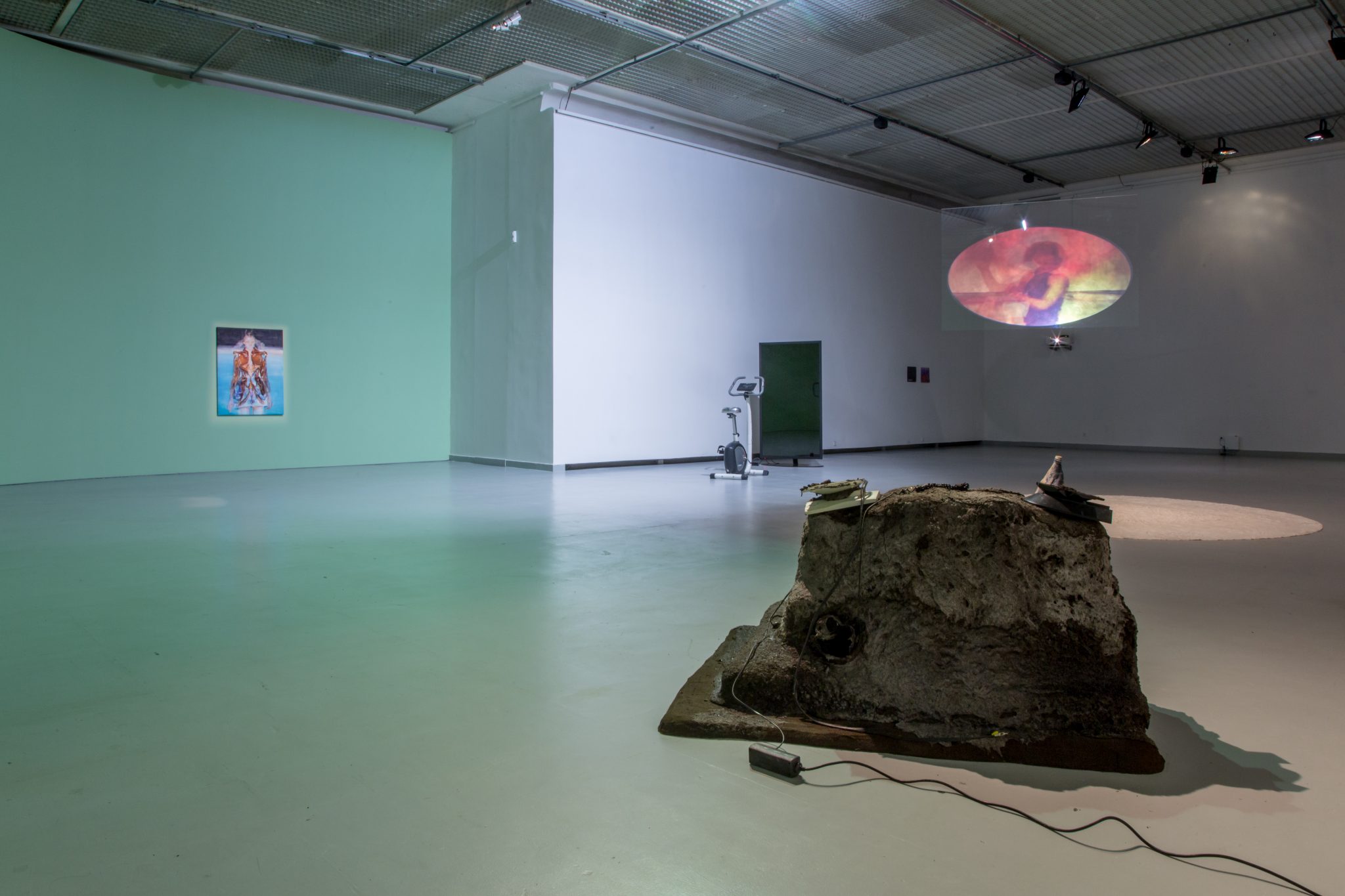 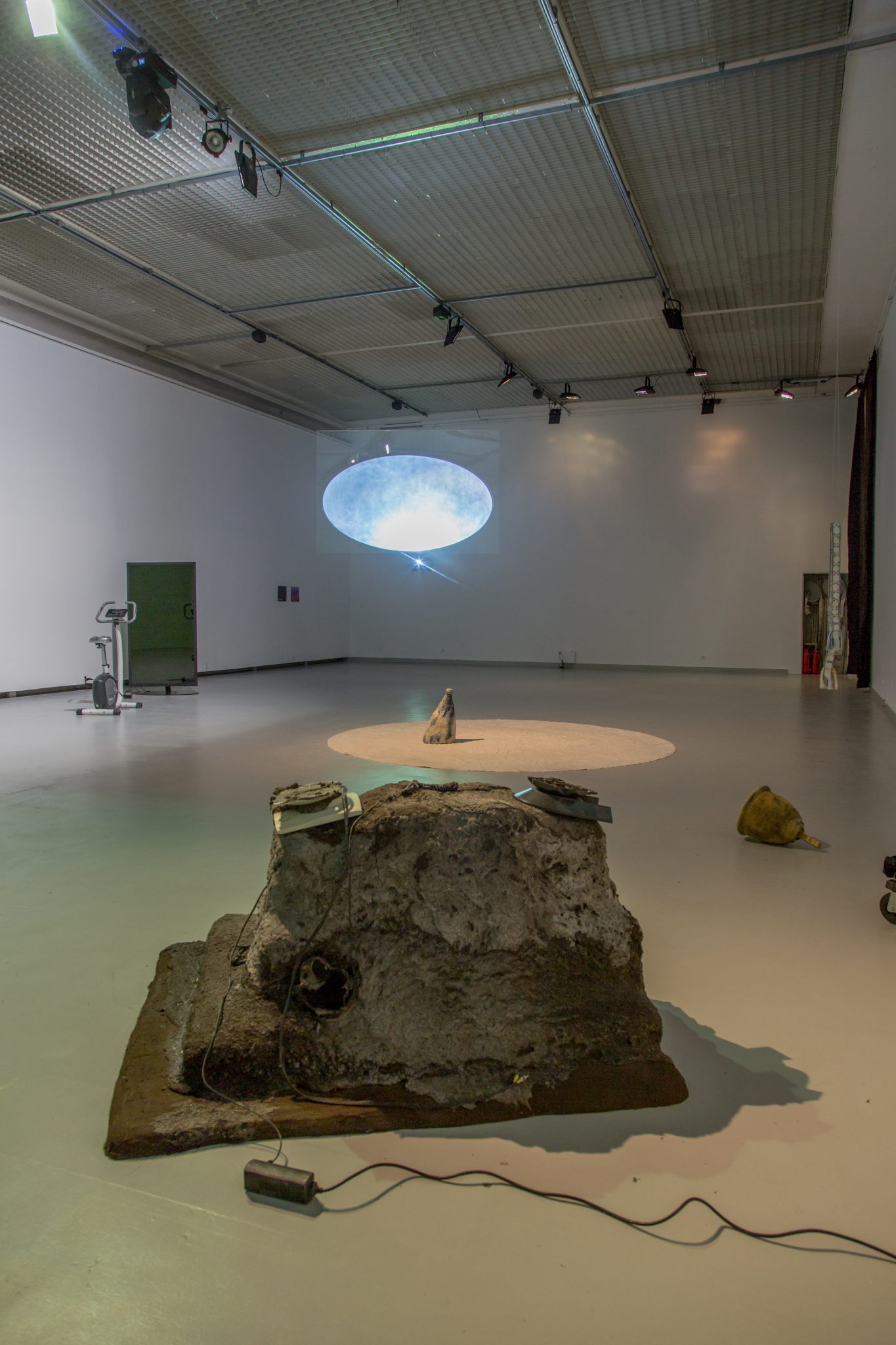 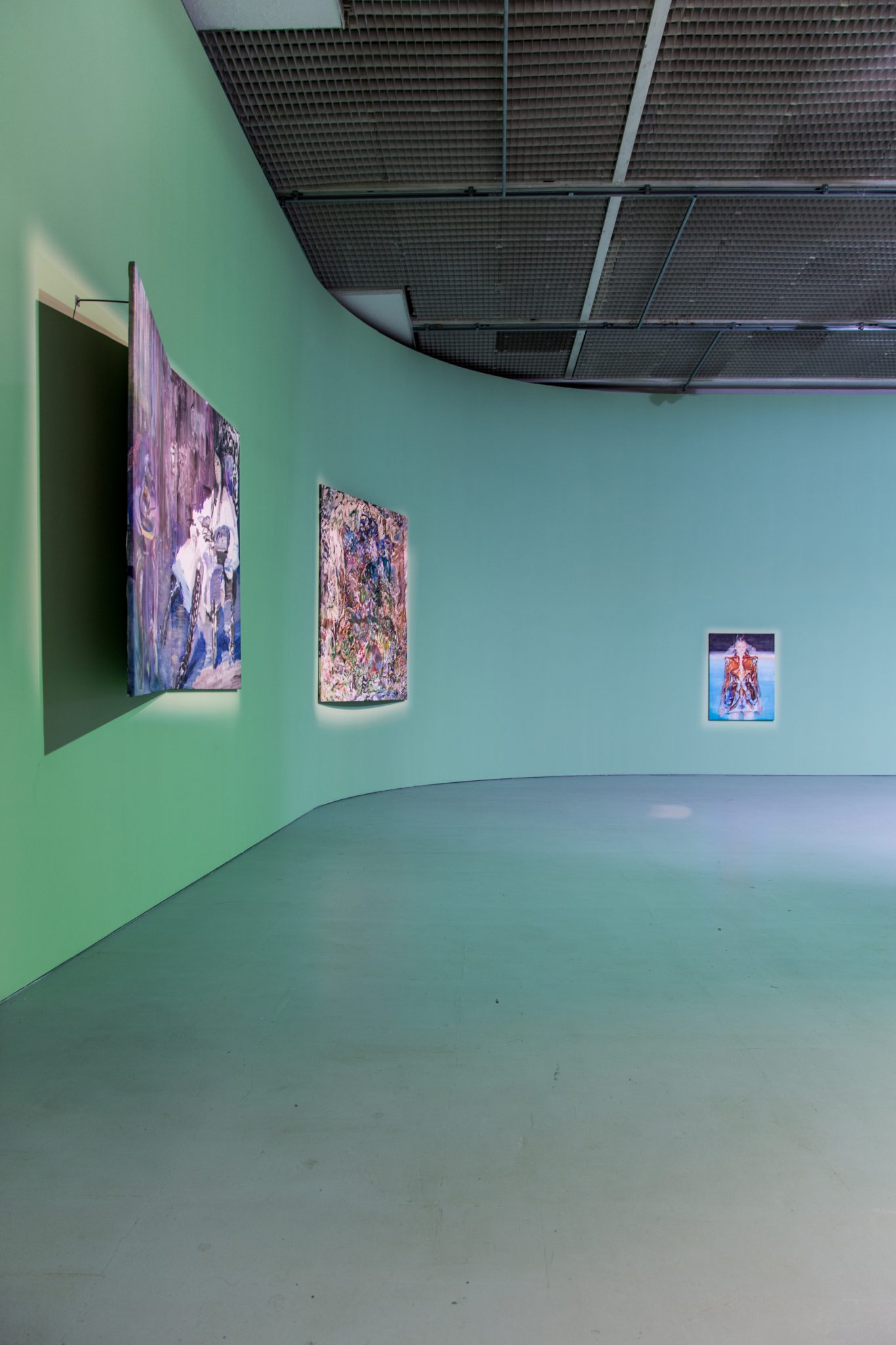 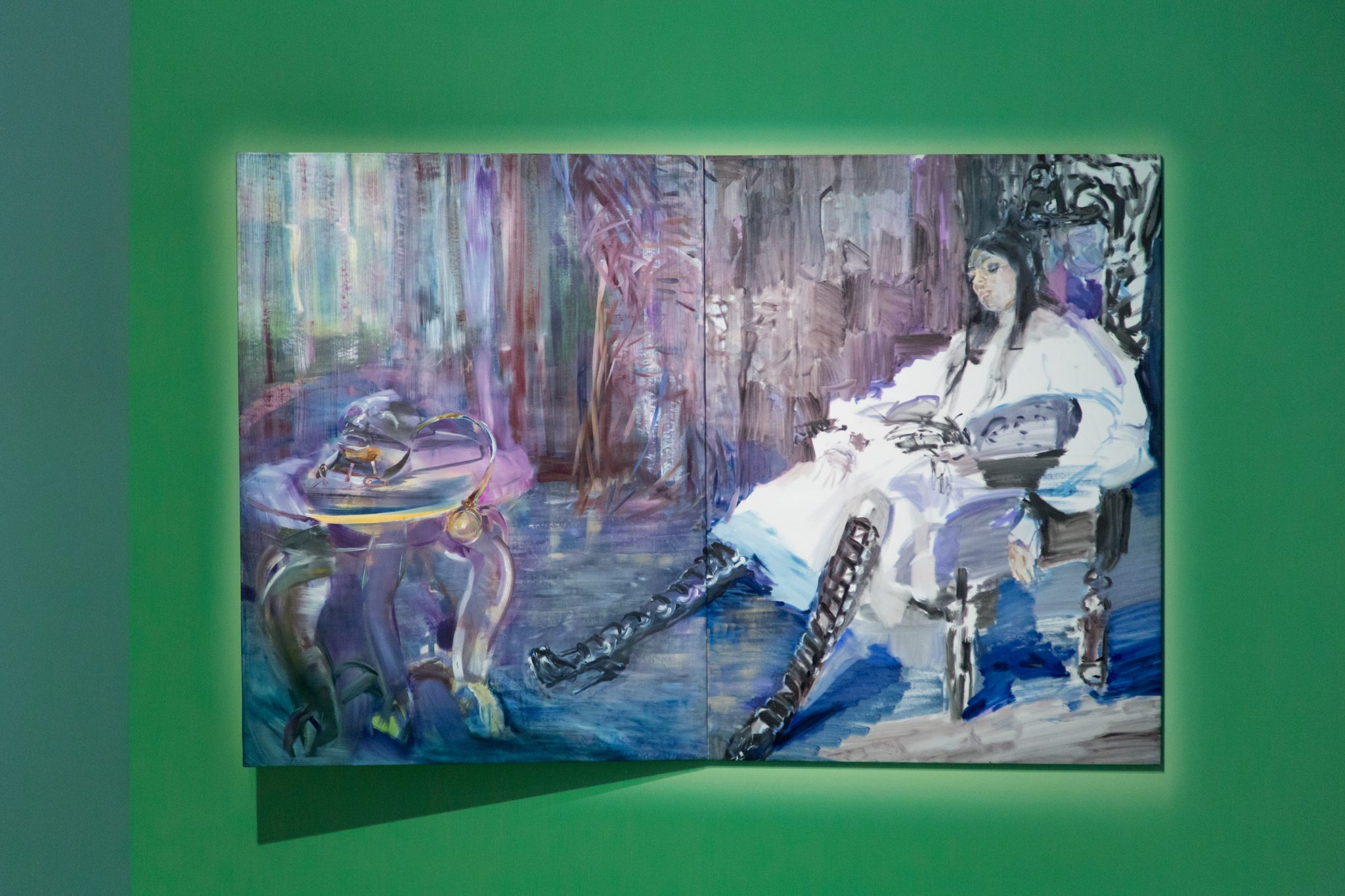 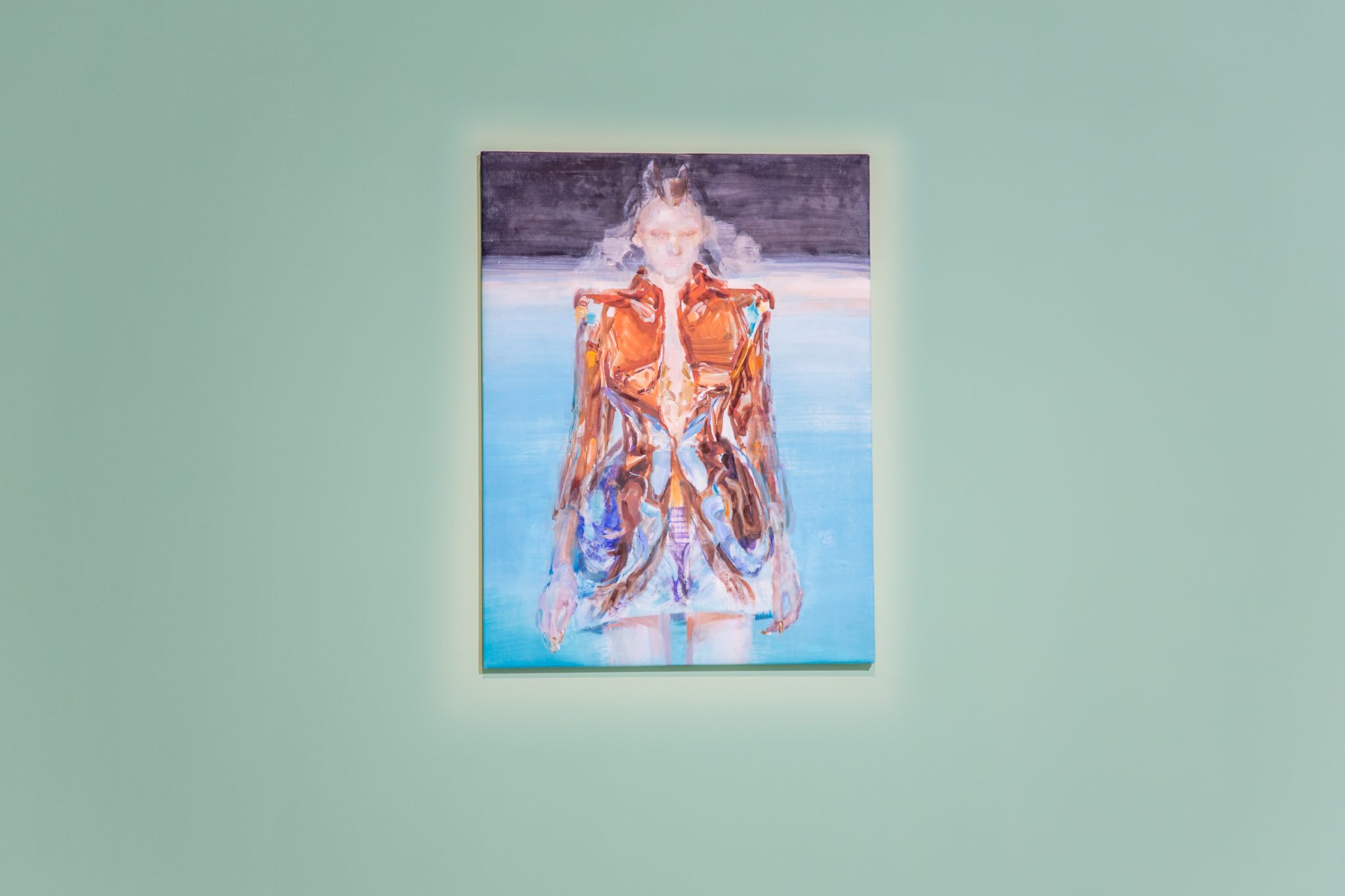 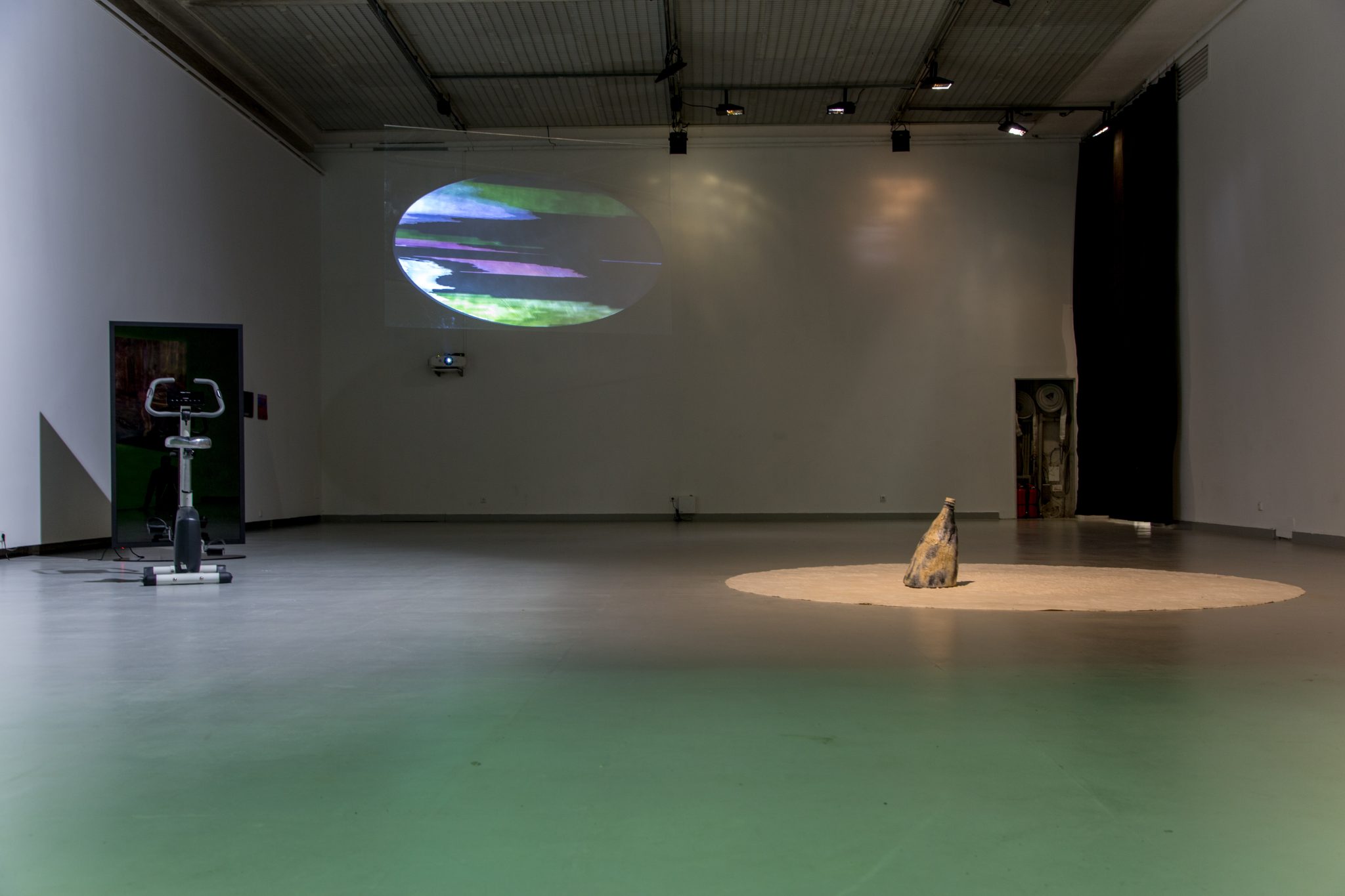 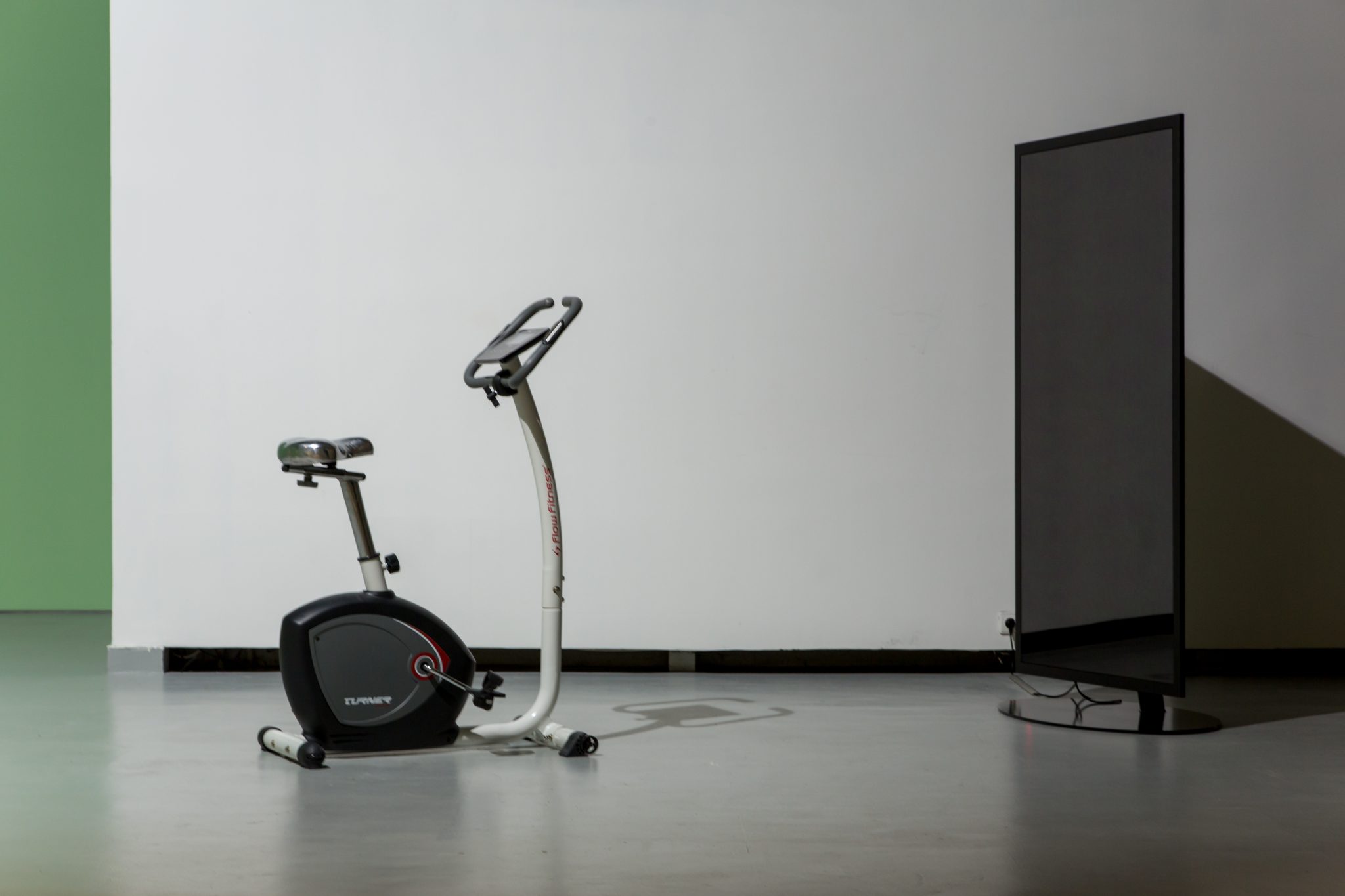 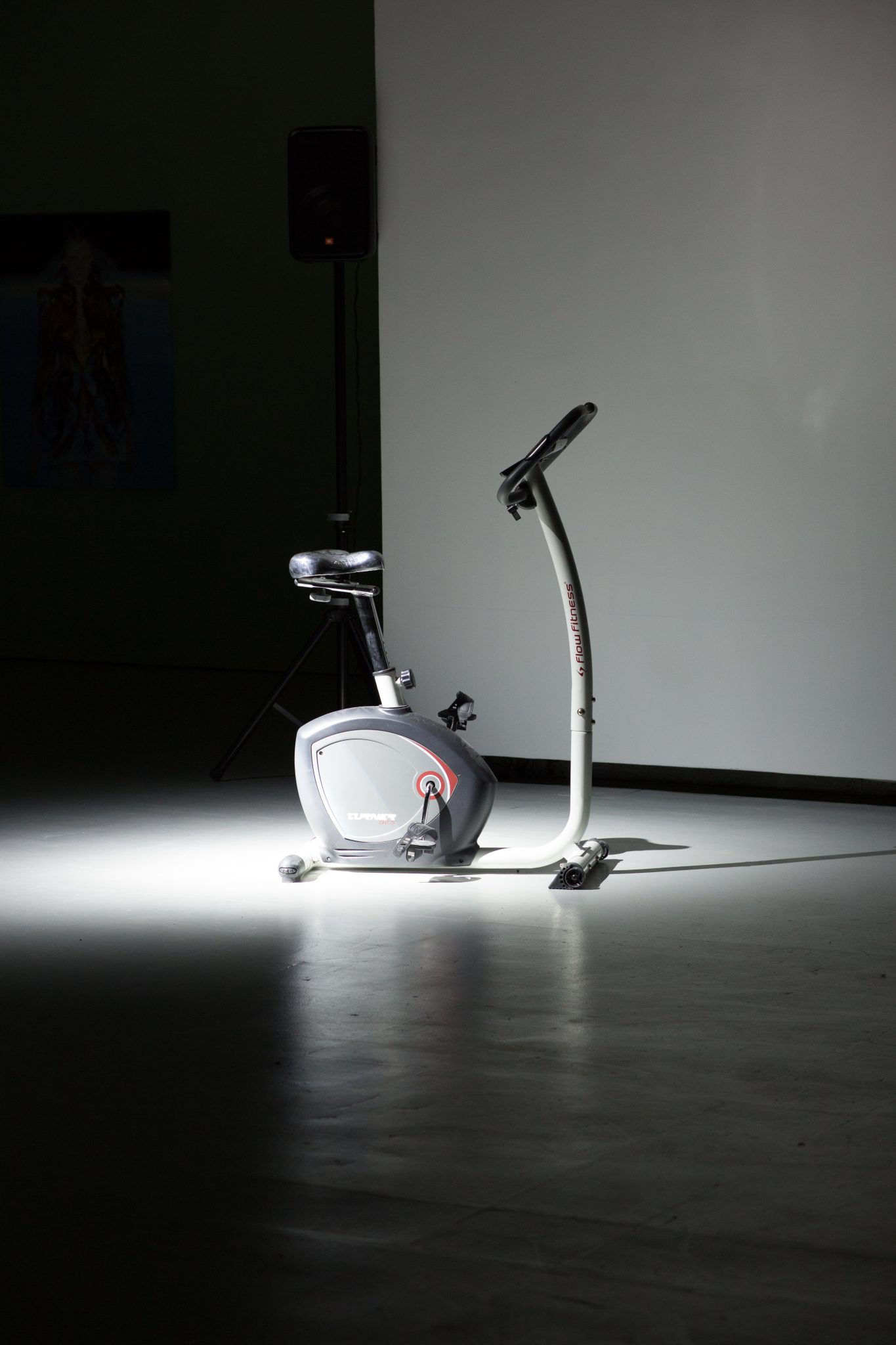 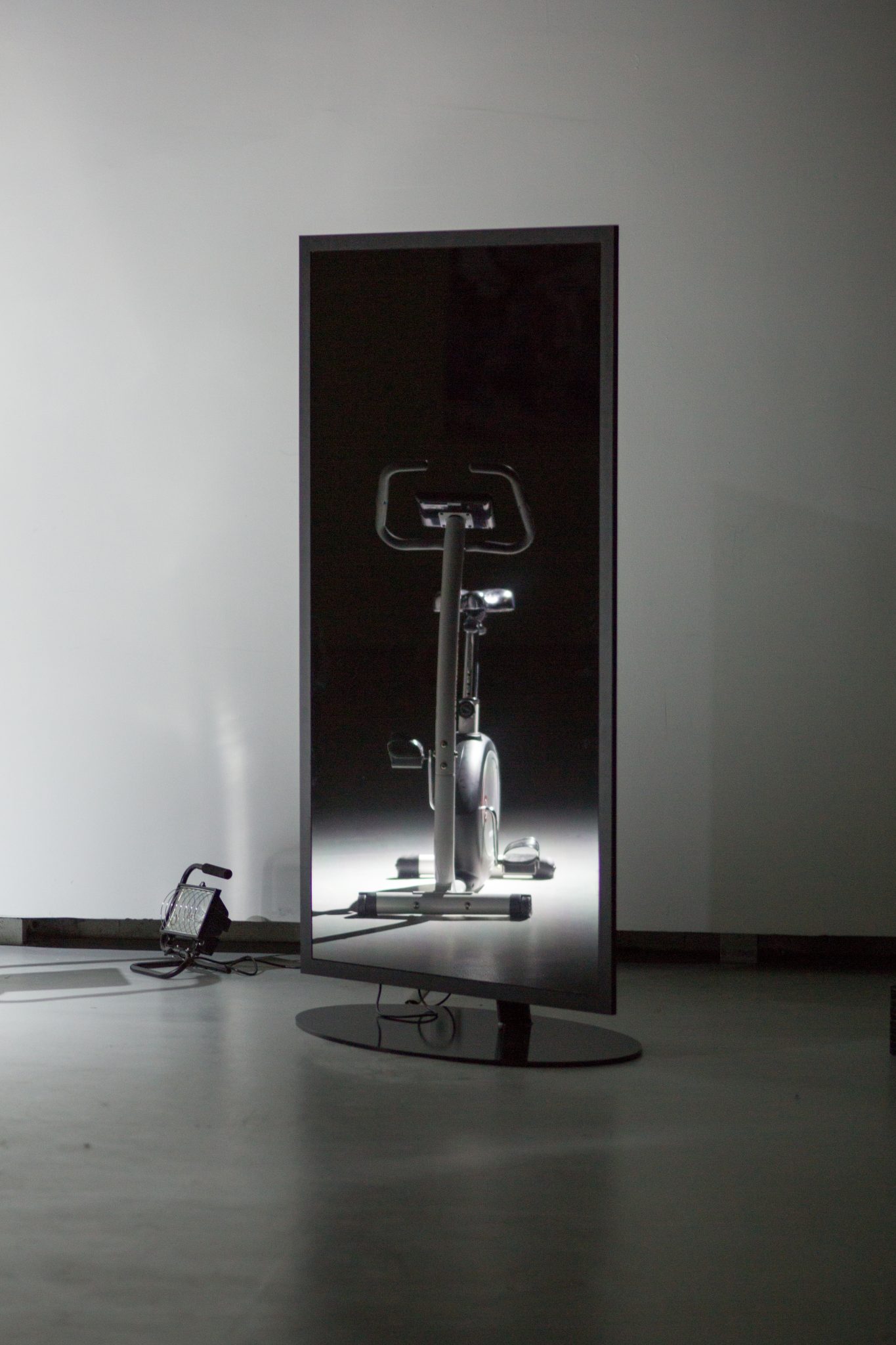 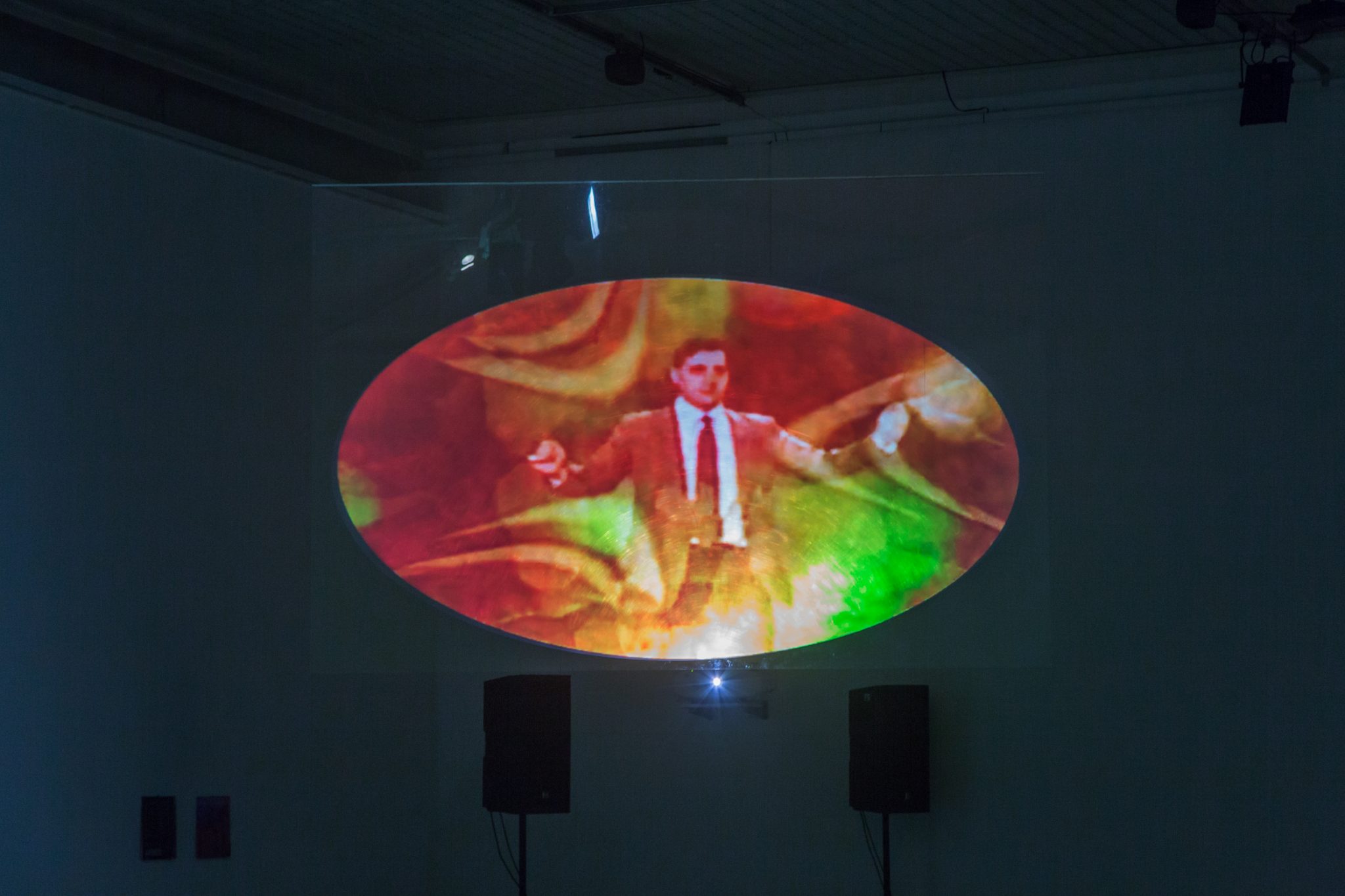 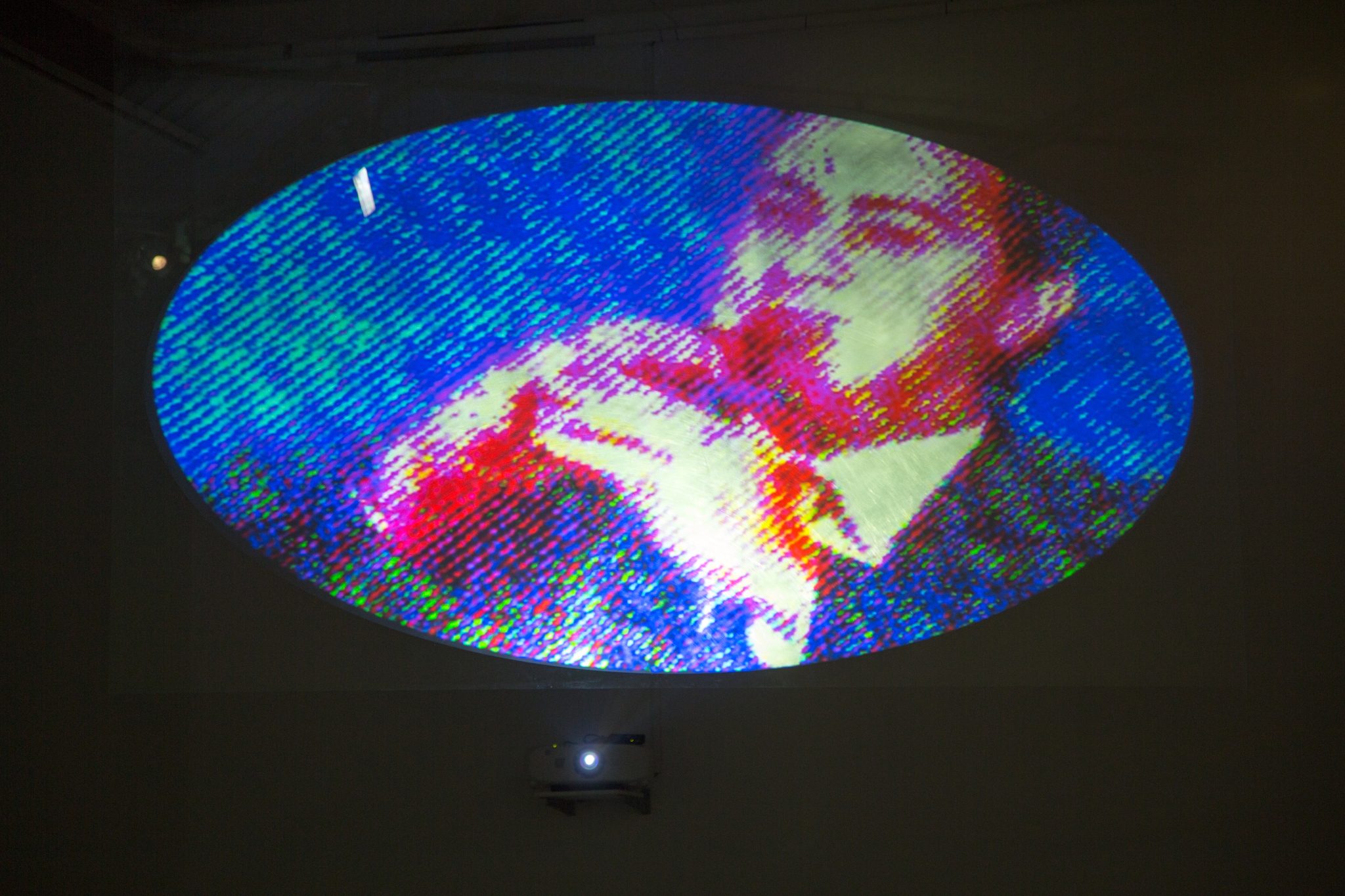 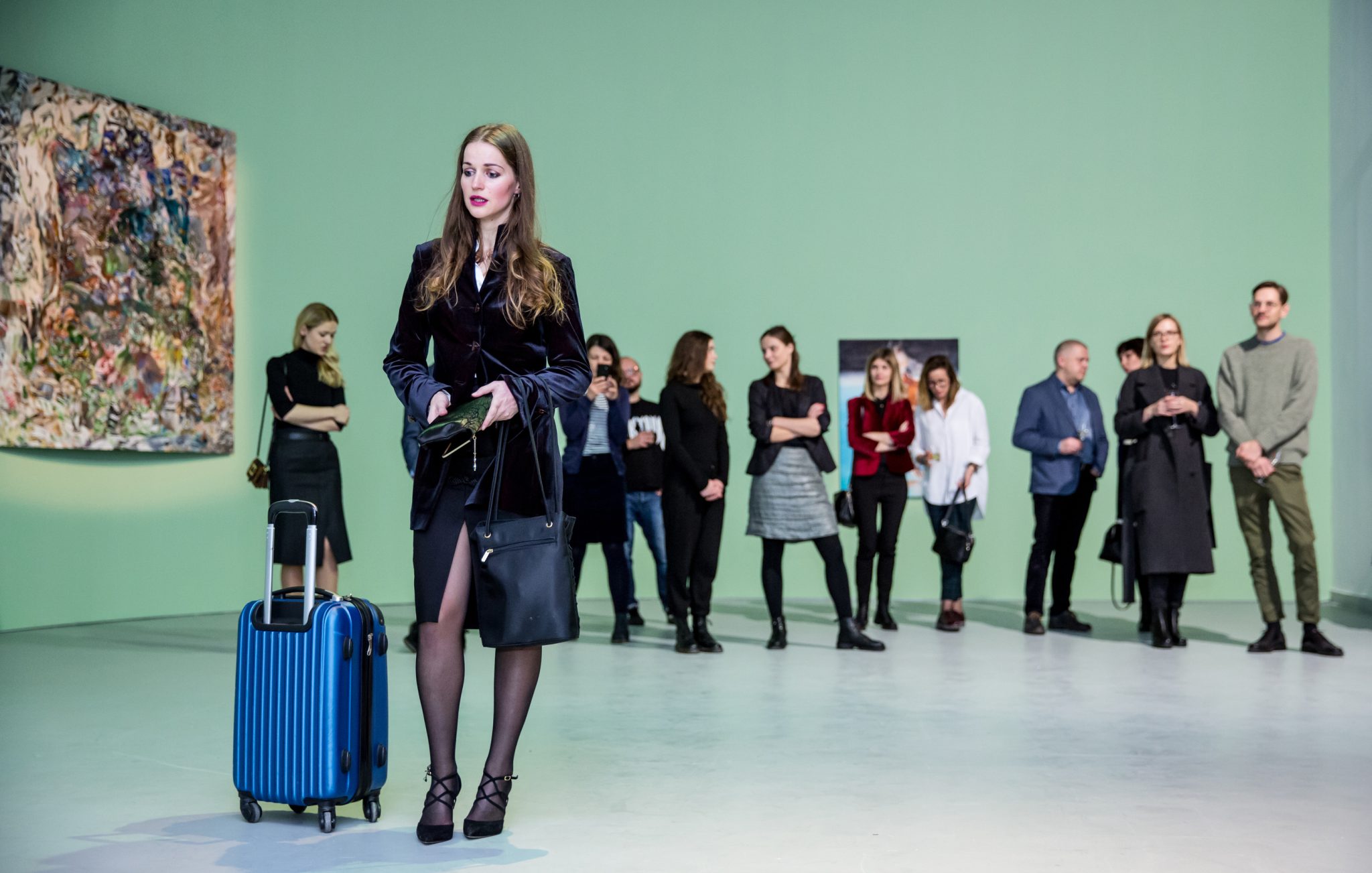 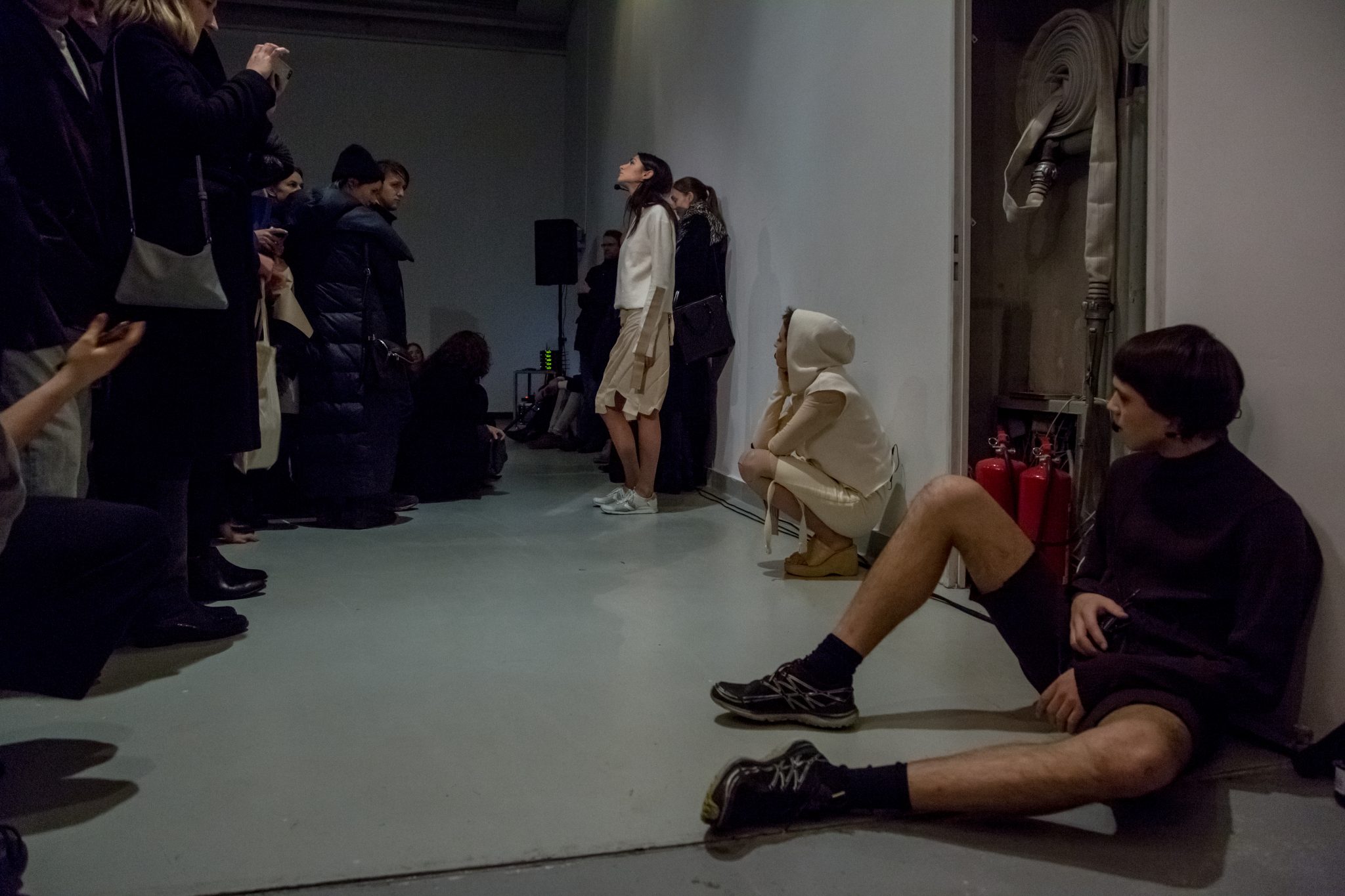