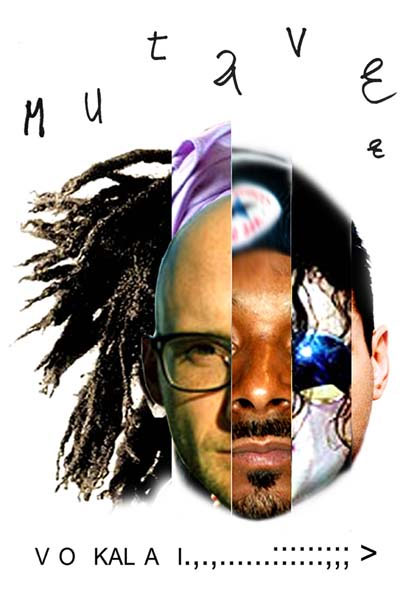 WALKMAN (Vilnius)
The conception of the vocal is related not only to emanated sound of voice or musical instruments, but also to a clearly audible expression of opinion. If we can clearly identify the vocal figure in a concert of traditional music, where the voice is as clearly audible and its source is visible, a question arises: what is the vocal or how does the vocal alter and mutate in the event of electronic music?

The design of contemporary music is schizophrenic: though we can clearly see a Japanese looking man with a guitar next to a stand, thanks to the use of a sampler you’ll hear the voice of a girl with a strong Samogitian accent. In the era of new musical technologies, musical expression and rhetoric have never been so free from limiting social, physical and ideological factors, but what happened to the vocal? What should be understood by the mutation of the conception of vocal?

If we are to understand the traditional vocal as an authentic voice, the lack of it could be explained by the phenomenon of remixology that characterises dematerialised electronic music. In the age of industrial and digital reproduction we are only reached by a copy of a remix. In Jamaica, since 1968, thirty years after the idea of authentic and irreplaceable aura (shaped by Walter Benjamin), the principles of copyright characterising industrial society were ignored. The music was remixed and remodeled, creating new original pieces and live performances. Despite a remix containing only a third, tenth or less of the original, the aura carries through from the age of industrial reproduction to digital.

The history of electronic music denies the credibility of linear history – its family tree is perhaps reminiscent of a constantly reconstructing robot, a self-replicant. The manufactured history of Pinocchio and his father was replaced by the phenomenon of omni-transformers. The software and principles of electronic music creation may remind us of fictional self-generating and environment-reproducing runaway-replicants from the lab of K. Eric Drexler, father of nanotechnology, who in the most dreadful sci-fi anti-utopias remakes the universe into the so called ‘grey goo’.

The vocal figure would ease these sci-fi frictions of a music world tormented by nostalgia for authenticity. The android as a self-constructor; as an automaton scattering semantic/phonetic dispersions; the machine pumped by sentences and phonetic models; or publisher of local and authentic interests – all are possible identities of the vocal to name just some.

The coordinates of performers, genres and music history will spread in all directions from the last decades of Jamaican, New York, Detroit, Berlin, and Lithuanian scenes, and their analogue fetish and digital vocals. Since the 1960s almost all popular and electronic music originated or was influenced in some way by Jamaican dancehall music and sound system traditions. In ‘Mutated vocals’ these traditions will be continued by reggae vocalist Paul St. Hilaire (ex-Tikiman, ex-Round Two). Prominent pioneers and producers of experimental, minimal dub Moritz Von Oswald and Mark Ernestus (Basic Channel, Berlin) will play endless pulsating metallic sound tunnels together with Paul St Hilaire.

Borrowing the name of diva Donna Summer, who rocked the world with synthesised sexual fantasies in 1977, Jason Forrest will blur any border between digitalia and turntable sound worlds. Actively sampling disco, prog-rock, digital noise, gabba (‘bleeding nose’ techno), drum-n-bass etc., he stands out as the most frenetic mixer of all the music archives since the invention of the laptop.

New projects will be staged by Lithuanian performers especially for this evening – covering found sound from the street to techno rhythms. PB8 will perform a duet with Dublicate will invite Puma from Riga. Low-tech vocalising expectations of localised subcultures of the hip-hop scene and MC‘s (Despotin projiktz‘) and beatbox (Def One) will be complemented by hotwired DJs with hi-tech electronic sources.

‘Mutated Vocals’ will have an open microphone for vocalists in the audience during the evening. Hopefully the idea of the pioneer of sonic fiction Kodwo Eshun: ‘you are an alien you are looking for’, will mutate to the even more productive slogan: ‘you are the vocal we were waiting for’.