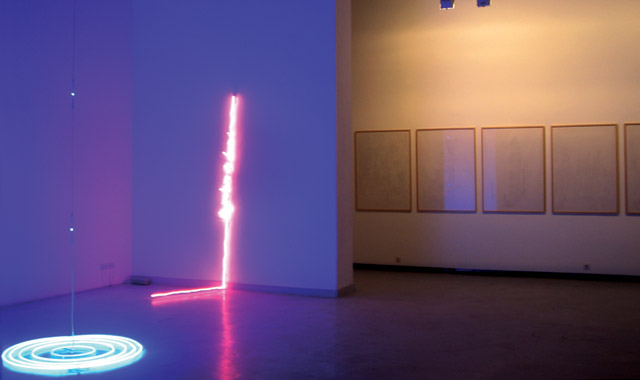 Curator: Sandra Patron (Triangle Marseille)
Scape presents itself as a kind of promenade in which the invited artists return to the secular notion of landscape. Whether these landscapes are from imagination or dreams, whether they are sensual or ironic, all of them allow free rein to spectator‘s own imagination. By using the conventions of landscape, the works exhibited offer the possibility of an experience somewhere between supposed reality and actual fiction.
For all the artists, however, over and above a diversity of thought and practice (drawing, photography, video, installation) landscape remains a pretext for escaping into respective dreamworlds.
The stamp of the contemporary world is clearly present here. The cross-fertilisation of territories and an absence of boundaries between means of artistic expression (and audiovisual technologies) offer new perceptions of landscapes from ‘elsewhere’.
The artists’ intention here is of a similar order to that of the artists and scientists of the Renaissance: by resolving the problem of two dimensions through perspective, they created the illusion of a third dimension by using trompe l’oeil. It was a question of constructing a ‘filter’ through which to perceive the world. The notion of landscape and its reality is indeed an invention. In other words, a cultural object only becomes ‘natural’ thanks to its permanent artifice.

Passing through a mirror?

Lewis Caroll is perhaps not so far away: from the hallucinatory videos of Heike Baranowsky, to the waterfalls and mirrors of James Ireland, and from the housefly trajectories of Pierre Malphettes, to the reconstitution of aurora borealis of Dove Allouche and Evariste Richer, to give just a few examples, the works presented in ‘Scape’ clearly situate themselves in the ambiguity that exists between notions of ‘landscape and escape’.

Heike Baranowsky
Heike Baranowsky’s videos are playing with our perceptions. Through images of landscapes made on computer she drives us in a fantasmagoric universe like that of Lewis Caroll.
For ‘Scape’ she presents Auto Scope: a drive around Paris projected on 4 screens in slow motion. Each of the four screens present the same journey and each tree, building, become a Rorschach experience.

Marie Danat
A series of observation and imagination drawings, watercolors, constitute a collection of designs composed of plants, arabesques, domestic objects.
Most of her pieces are close to baroque decorative art. This dreamlike space is hunted with floating shadows, usual objects, hybrids anthropomorph and phytomorph. For ‘Scape’ she presents a piece made directly on the wall.

Dove Allouche & Evariste Richer
Dove Allouche and Evariste Richer began working together in 1999 when they met in Berlin. They have worked separately since 2002.
The raw material of these two artists, photos, videos, manufactured artifacts, bear a meaning they object to – to give the new object a new significance. They present Plumières, a series of drawings of caves made by the specific technique of carbon transfer. At the same time, Evariste Richer show a new piece Forest : by a simple cut, he destroys a classical image of beauty.

Mariusz Grygelewicz
Mariusz’s wish is to connect political, aesthetic and even personal thoughts and references in his work. The piece is a balance of all these ideas and sits somewhere between implosion and explosion.

James Ireland
James Ireland plays with landscape conventions inherited from the Renaissance by building models from different useful artifacts.
Through mirrors, lights and posters, the artist works with an illusion which plunges us in an intriguing and poetic universe. Three new pieces have been produced for the exhibition during Ireland’s stay in Vilnius, including a work designed specifically for the CAC which uses the architecture to provide us with an eternal sunset.

Pierre Malphettes
Movement plays a particularly important part of Malphettes’ work. Movement viewed as peregrination, as an experience of our limits and our freedom. A trip made above all by the mind.
Pierre Malphettes presents two neon signs which propose a frozen image of the movement making up an insect’s trajectory and the falling of a drop of water.

Claire Lesteven
Claire Lesteven transforms circular boxes into camera obscura with several openings. She is interested in capturing a synthesis of the environment without privileging a single point of view. For this large negative, she used a water tower, which is commonly found on the roofs of buildings in New York. This photo was produced in New York Harbour.
The video The grand Hall elucidates a vision of the entrance to a grand hotel. 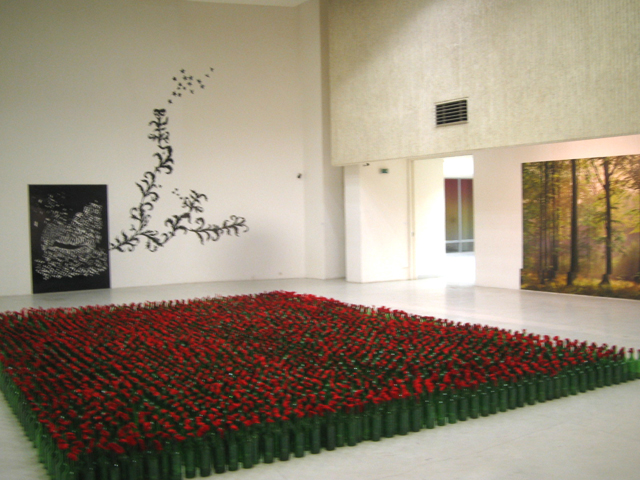 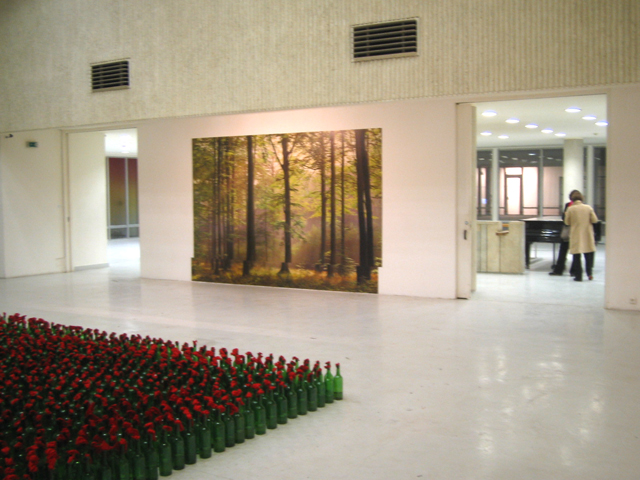 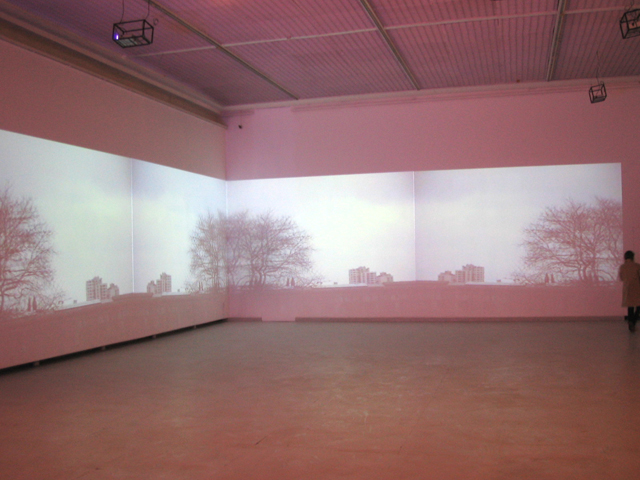 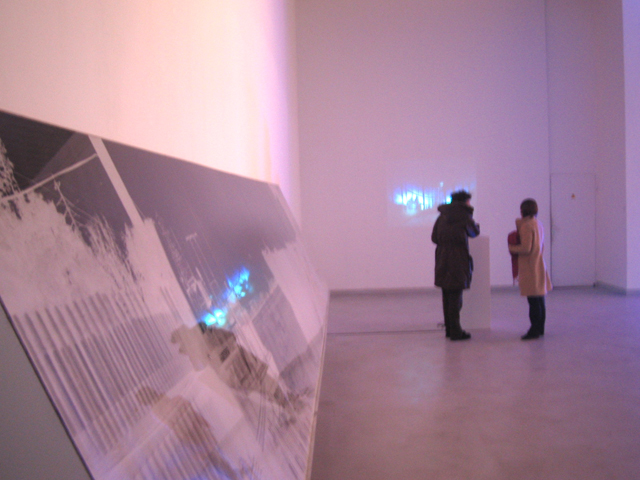 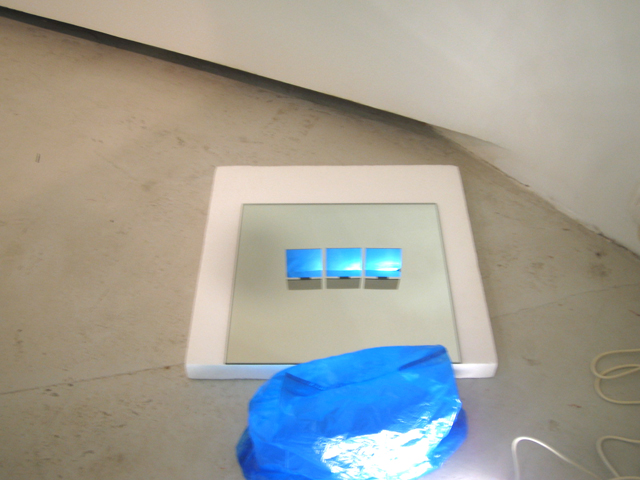 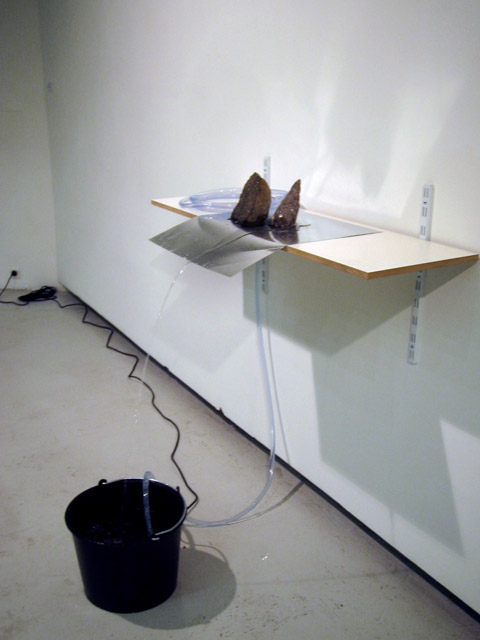