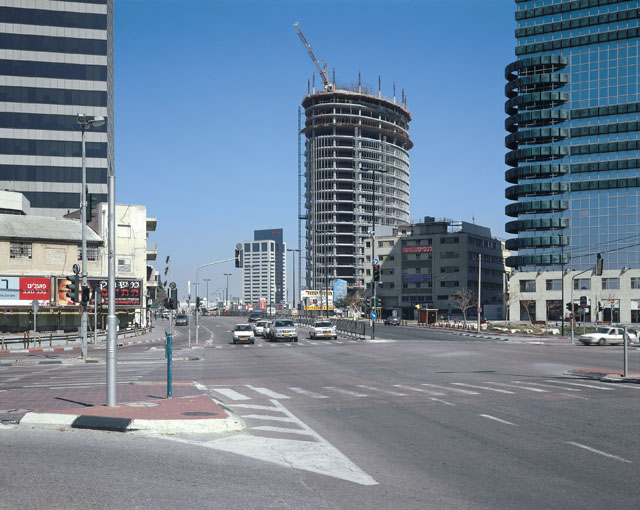 Curator: Stéphanie Benzaquen
‘Hereafter’: what will occur, here… in the coming minute or in an improbable future. This ‘Hereafter’ , as well the silence of a moment, could be the moment which precedes the event. A tension. An in-between whose image would not reveal anything to the eye of the one who ignores, without sign, without clue… A passage. A transition.

Israel: an area of conflicts. On its boundaries since its establishment in 1948. And, for almost three years, a country stuck within the violent and endless conflict with the Palestinians. Inside its frontiers too because of its social complexity. Israel is built on the immigration – each flow having brought its own claims and pains, and its history. The cultural plurality displays within dichotomies and tensions. At last, a country which is continuously seeking for its identity, oscillating between the exile inheritance and the territorial pragmatism. A country torn between the protection of the elements that built its specificity and the desire for normalisation, or the integration within a larger whole: difficult adjustment of the particularism and the globalisation.

The nostalgic temptation is strong in the Israeli contemporary art. Nostalgia for better days, when the conflict was not so present in the daily life. Nostalgia deeply rooted within a particular historical vision, related to things that don‘t exist anymore and that will never come back, whatever they are, the pre-war Jewish world, Israel in the effervescence of its construction, the myth of solidarity and of the Zionist home. And nostalgia for an artistic practice that did not have, by that time, to untangle the muddled skein of more and more complicated political positions: then, the commitment was clear.

Between this intangible past, somewhat inexistent and imaginary, and the overshadowed future, as carrying too many questions and fears, what is left is the present: such a hard present which is the mark of a country locked up in its traumatisms and hardly able to deal with them. Somehow, a present without actual mediation.

The artists of the exhibition share the willingness to inscribe their creativity within new perspectives, as a necessary step of the mediation. Each one copes with the task to decipher differently the reality, to imagine other visibilities for the present and to bring them to awareness and larger interpretations. It is the complicated representation of a country going through continuous changes. By setting in motion the process of questioning, and not through the call to a massive reaction, the presented works aim at reflecting the ‘transitory’ component as an essential element of the Israeli reality and thinking the possibilities of transition. Like an attempt at drawing right now the topography of a possible future without forgetting that this future, heavy of contradictory schemes, remains in the hands of those who act within the present. A time of wait, beforehand…

In the video works by Adina Bar-On, View and Motherland, the body, the movement and the word redraw the landscape, endowing it with new meanings. The artist rebuilds the relation to the territory, the earth as well as to the memory and the history impregnating the Israeli landscape and turns them into vectors of universal feelings and understandings. The reconfiguration of the environment goes too through the articulation of the context with other situations and through the creation of parallels in time and space. The documentary by Ilana Salama-Ortar, The Camp of the Jews, through the personal witnesses about the transit camp of the Grand Arénas in Marseille (France) – where the artist stayed when she was a child – opens to connections to multiple stories of exile, displacement, loss and tearing and to the wider reflection regarding the structure of the camp, whatever it is, wherever it is, whenever it is.

The exhibited works give neither a solution nor answer: they present a situation in its unfinished and potential aspects. There is a certain dialogue between the works by Nira Pereg, Guest, and Ariel Yannay, Surroundings, who both show building sites, zones of transformation. For Pereg, the human element, the artist herself, is a determining presence. Feelings and fears of the female character combine with the chaotic and dubious urban landscape, which is actually one of the central streets of Tel Aviv. It creates the oscillating perception of the inside/outside relationship. Text and voice of Louise Bourgeois intensify this oscillating subjective perception and move away from the documentation. For Yannay, the locations, the surroundings, are empty: building areas, of Tel Aviv and Jaffa, whose ephemeral aspect has been definitely fixed. The immobilised space and time reflect a context, which is first the daily one facing the artist, then the paradoxical view of the permanence developed within the temporary. The building sites are the translation of the paradigm of the transitory.

The contradictory juxtaposition of permanence and temporary, or the continuous passage, gets another translation with the work by Effi Weiss and Amir Borenstein. Vil-Nor is the fictionalised version of the mythic story of the Genius of Vilnius (the Gaon of Vilna). In this subtly ironic work on the endless exile, which is also a never began exile, resound the personal perception of two Israeli artists living abroad since a few years as well as the essential dimension of the movement in the Israeli culture.

Eliasaf Kowner too uses the stories of others – the passer-by, the accidental encounter – to depict the reality, from a totally different point of view. He projects his own questioning towards and through the words and attitudes of the people which he meets and films during his walks in Tel Aviv. Sensitive gaze posed on two women sitting in a bar, In the Centre creates empathy and moments of identification.

Rotem Balva acts through minimal displacement and shifting in order to reach areas where codes and boundaries get confused. The intermediary and filtering space, where the rules of the game fade away and the interpretations collide, brings, through a controlled aesthetic process, her daily intimate feelings towards the public view. Op-Allah invites the viewer to enter the private experience built as an installation for communication. 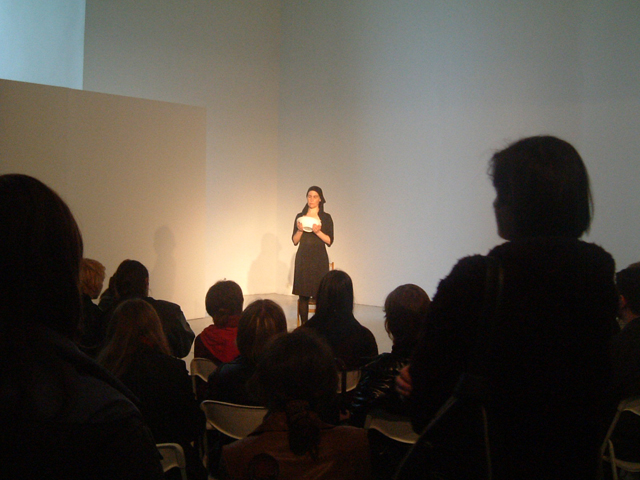 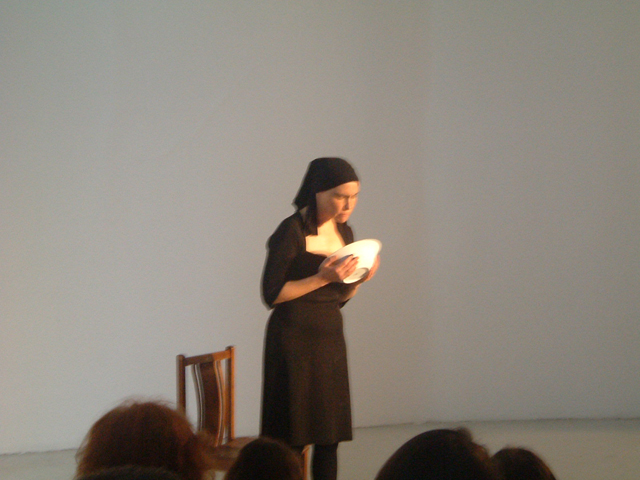 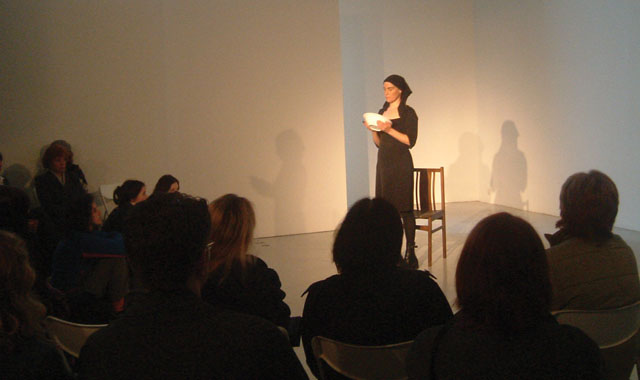