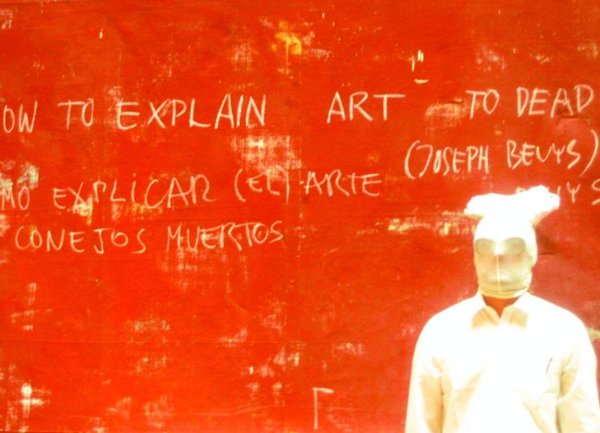 Saturday 28 April at 6pm
Lecture at the CAC Reading Room

Estonian Anonymous Boh (Al Paldrok) has been active from 1992 on a frameless
territory where an art object has seized to exist as a physical piece.
The space has many dimensions upon which the activity has been built.
Curating the performance group Non Grata actually means creating a
certain kind of school which can be characterized by features as
structured chaos, performances in arbitrary environments and interiors.

By obtaining its reputation as an alternative, Boh, has swooped onto the
global art landscape without looking back. Performances, art tours
organized in tens of cities across Europe, Asia and America have turned
the notoriously alternative Non Graters into a creative collective who
are much better known elsewhere than in Estonia. Their experience is not
a subject much talked about, although artistic activity transcending
boundaries of art and countries is today’s artist’s most desirable
self-realization.

Around the name NON GRATA there have been different hushes and shushes for a long time. Already from the point of view of death of conventionalization of art it has embodied the horrible and unwanted disembodiment of human person, from which the meaninglessness of nowadays art, is pouring out. For those, whose world of arts starts from the point, where the art world ends, NON GRATA has been a liberator, the orphic gap in the seemingly unalterable course, which however betrays us, it is a cure from incest. The main point of the group is ethical – it is the image of primitivism, impersonality and experimental creativity. The performances of the group take place according to the logic of avoiding codes. The presentations are physical texts, whose ways of orthography and reading are kept within limits of real actions by the groupmembers. Aesthetical and provocative challenges are represented in places, where the Art World doesn’t work.

Lecture at the CAC Reading Room