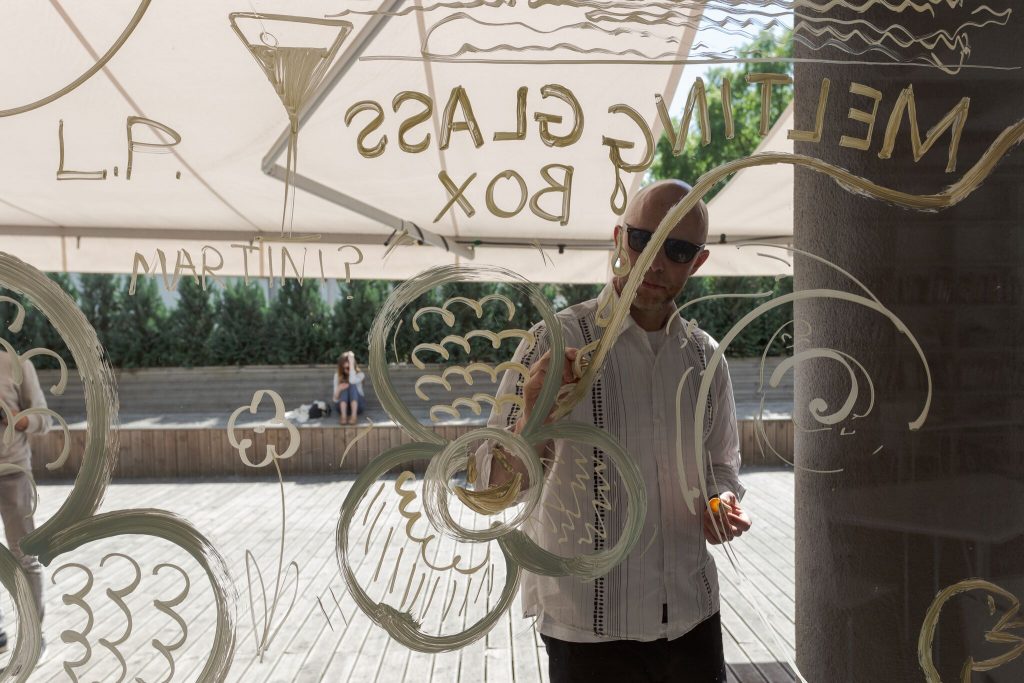 A week before the closing of the Baltic Triennial 13, Contemporary Art Centre kindly invites you to attend a special weekend programme which will take place on 3–4 August at CAC, Vilnius. During the event we will watch a film, walk around the exhibition and converse, listen to music, create, enjoy Japanese ice cream Kakigōri and browse books.

On Friday 3 August at 7pm we invite you to a tour of the exhibition with one of its curators – Neringa Bumblienė –¬ during which you will find out more about the Triennial itself, the curatorial process behind it and the exhibited artworks.

Right after the tour, at 8pm, we invite you to a free screening of The Host and the Cloud (2011, 121‘30“) by the famous French artist Pierre Huyghe (b. 1962) at the CAC Cinema. This film, as with many conceived by the artist, balances between reality and fiction. The work, which lasts for more than two hours, was filmed in a closed museum at the far end of an amusement park on the outskirts of Paris. Conceived as a role-play and filmed over the course of a whole year, the film concentrates on three specific days: Halloween, Valentine’s and International Workers’ Day, offering a hypnotizing journey exploring free and yet undefined models of behaviour.

We will continue the closing programme on Saturday 4 August at the CAC Terrace. From 3 to 7 pm music by the DJ Try My Love will flow freely, there will be Japanese ice cream Kakigōri and drinks available free of charge, as well as an opportunity to check out and purchase books distributed by Six chairs books. During the event visitors are invited to participate in free workshops and tours for the whole family.

All the events of the Baltic Triennial 13 Give Up the Ghost are open and free of charge. The exhibition is open until 12 August.

The Baltic Triennial is the largest and most important event of the CAC, and has taken place every three years since 1979. For the first time in its history the 13th Baltic Triennial is organised and hosted by all three Baltic countries: Lithuania (exhibition open until 12 August), Estonia (open until 2 September) and Latvia (opening on 21 September).

The 13th Baltic Triennial, titled Give up the Ghost, explores the notion of belonging and questions what it means to live in a time of fractured identities. The exhibition in Vilnius features 27 artists from 22 countries. It was organised under the leadership of French-born and London-based contemporary art curator Vincent Honoré, who worked with an international team of curators: Dina Akhmadeeva, Canan Batur, Neringa Bumbliene, Cédric Fauq, and Anya Harrison.

The exhibition showcases works in different genres, ranging from drawing and painting to large-scale sculptures, videos and installations. Almost half of the works presented at the Baltic Triennial 13 were commissioned specifically for this exhibition, the other half comprises works that have never been exhibited in Lithuania before. All together they create a polyphony of voices, revealing multiple artistic strategies of contemporary art today.

The Baltic Triennial 13 celebrates the centenary of the independence of Lithuania, Latvia and Estonia.