Jérôme Bel. Pichet Klunchun and Myself 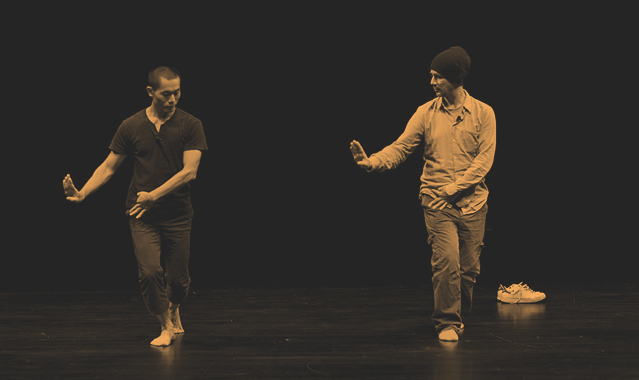 Pichet Klunchun and Myself is one of many choreographic portraits produced by the French choreographer Jérôme Bel. In these portraits, dance performance is made visible or shows itself as a conversation on dance. At the CAC the dancers will talk a lot and dance a little. The similar approach has already been applied to Véronique Doisneau, Cédrique Andrieux, Isabel Torres and The Last Perfomance (Lecture) featuring the artist himself. Pichet Klunchun and Myself stages a meeting between Thai classical dancer Pichet Klunchun and Jérôme Bel, which critics refer to as a conceptual dance proponent and call him the enfant terrible of the nineties. Starting from wry cultural clichés – royal Thai khon dance which is today part of tourist entertainment and slogans of the French avant-garde, both dancers in the course of the performance seeks for an altogether new definitions of dance practices.

In Pichet Kluchun and Myself Bel continues to question the conceptual possibilities of dance as a medium, or as André Lepecki puts it, the “political ontology of the movement.” Choreographer wonders what are the minimal conditions for the piece to be accepted as dance. While trying to find some answers, he uses choreography “degree zero”: refuses dancers, plays with authorship, throws the party on the stage, and gossips dance.

By asking dancers to discuss the subject of their practice, Bel moves away from modern and contemporary dance and rather acquires and utilises the methods of contemporary art. At the same time, quoting Lepecki, “dance, over the past decade, has become a crucial referent for thinking, making and curating visual and performance-based art.”

In September 2004, I was invited in Bangkok by Singaporean curator Tang Fu Kuen to lead a project. I wondered for a while if I should accept the invitation or not, and I finally proposed to try to work with a traditional Thai dancer.

I am indeed deeply interested in the extra-occidental performing arts traditions, for both dance and theatre, since being dazzled by a Kabuki performance I attended in Tokyo in 1989. I had similar feelings with Indian traditional dance or with the parade of the Rio de Janeiro Carnival.

Tang Fu Kuen suggested to dancer and choreographer Pichet Klunchun that he meets me during my stay in Bangkok in December of the same year. We met without knowing anything about what could finally result from our meeting. I had just prepared beforehand some questions to ask to this dancer. Personally, I had only a vague idea of what traditional Thai dance was, and Pichet Klunchun didn’t know my work.

The circumstances of our meeting determined the nature and the form of the result we obtained. Jet lag, the fascination that the city of Bangkok and its inhabitants exerted on me, the monstrous traffic jams which did not make it possible to do all the rehearsals, the context of the Bangkok Fringe Festival where the piece had to be premiered, led us to present to the audience a kind of theatrical report of our experience.

We happened to produce a kind of theatrical and choreographic documentary on our real situation. The piece puts two artists face to face who know nothing about each other, who have very different aesthetical practices and who both try to find out more about each other, and above all about their respective artistic practices, despite the abyssal cultural gap separating them.

Some very problematic notions such as euro-centrism, inter-culturalism, or cultural globalization, are issues defined all through the piece. These notions which are so delicate to discuss can’t be left out. The historical moment doesn’t allow what is at stake here to be skipped over .

Jerome Bel lives in Paris, he works worldwide. His first piece, nom donné par l’auteur (1994), is a choreography of objects. The second one, Jerome Bel (1995), is based on the total nudity of the performers. The third one, Shirtology (1997), presents an actor wearing many T-shirts. The last performance (1998), in quoting several times a solo by the choreographer Susanne Linke, and also Hamlet or André Agassi, tries to define an ontology of the performance. The piece Xavier Le Roy (2000) was claimed by Jérôme Bel as his own, but was actually choreographed by the choreographer Xavier Le Roy. The show must go on (2001) brings toghether a cast of twenty performers, nineteen pop songs and one DJ. In 2004, he was invited to produce a piece for the Paris Opera ballet: Veronique Doisneau (2004), on the work of the dancer Véronique Doisneau, from the ballet corps of that company. Isabel Torres (2005) for the ballet of the Teatro Municipal of Rio de Janeiro is the Brazilian version of the production for the Paris Opera. Pichet Klunchun and myself (2005) was created in Bangkok with the Thai traditional dancer Pichet Klunchun. In 2012, he was invited to Documenta (12) to present his Disabled Theatre, the performance created in collaboration with the mentally disabled actors from theatre HORA, Zürich, Switzerland.

Thanks to Nicholas Matranga

With the support of:
Lithuanian Council for Culture