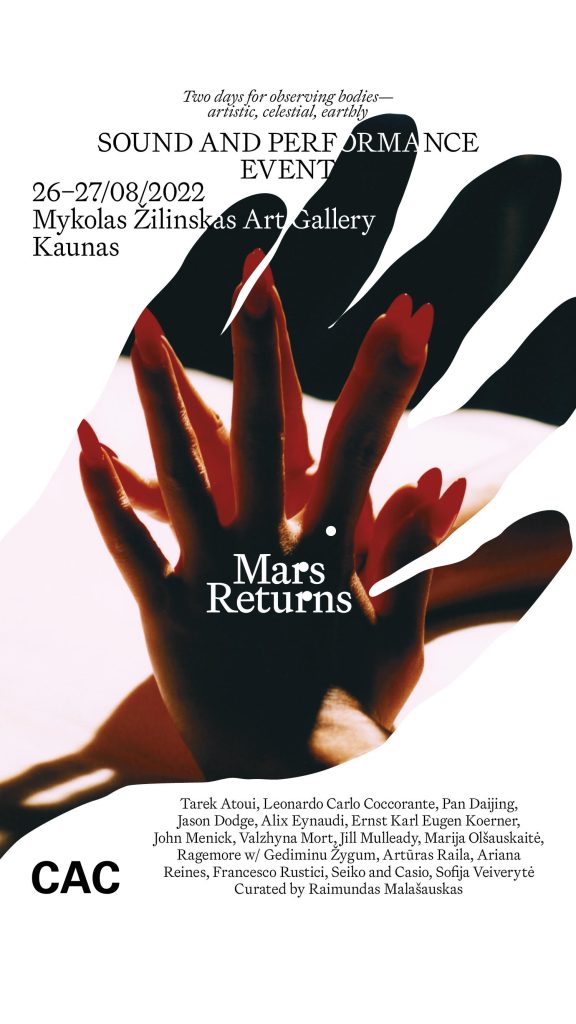 26 and 27 of August at Mykolas Žilinskas Art Gallery (Nepriklausomybės square 12, Kaunas). Admission is free of charge.

Mars is one of the most contested bodies in the solar system. Its role in the popular and scientific imagination has far surpassed other terrestrial planets. In different cultures and at different times, it has been known by many names, but in the Western Hemisphere it is almost exclusively named after the Roman god of war. The spectrum of fantasies that Mars has evoked is broad and contradictory: humans have never stopped wondering whether it hosts life, and have described utopian societies living on the red planet. We have both seen it as home to more advanced alien societies and prepared ourselves for an invasion of blood-thirsty Martians (although in more recent times we’ve been investigating the possibility of living there ourselves). I have even experienced the scent of Mars, created by an artist. Meanwhile, astrologically speaking the return of Mars implies the processes of returning, purging, increasing complexity and bringing resolution to past experiences. Thus, in cultural astronomy and popular imagination we are facing a very rich landscape, by far exceeding the actual surface of Mars (as we know it).

Architecture is another contentious area. The Mykolas Žilinskas Art Gallery was originally developed to house a collection of classical western art owned by Mykolas Žilinskas, a Lithuanian art collector who lived in West Berlin after the end of the second world war. The gallery was designed during the collapse of the Soviet Union and was completed in Kaunas, Lithuania, in 1989 – the same year the Berlin Wall crumbled, symbolically marking the end of the Cold War. Over the ensuing 31 years, the venue has witnessed many things and in 2020 was closed for reconstruction. When it reopens temporarily for Mars Returns it will find itself in a very different world. The Cold War has been replaced by an escalating actual war in Ukraine, arguably a continuation of unresolved 20th century political conflicts amplified by imperialist and colonialist drives. Currently, these unlearned lessons are returning us to the 20th (or even 19th) century, and bring us closer to another nuclear tragedy.

A few months ago, an international group of artists were invited to explore and inhabit the Mykolas Žilinskas Art Gallery through sound, performance, film, and poetry. Traces of the gallery’s history, all types of relics, its current state of transit, and possible futures were brought into the conversation. The architecture of the Eugenijus Miliūnas-designed building was amplified through sound and the return of artworks from Žilinskas’ collection. The feeling evoked was one of communal restfulness and careful observation of bodies — celestial, artistic, earthly. Healing was attempted through communal gathering, listening, and grieving. The building of the gallery will turn into a large-scale listening and playing device operated by Tarek Atoui and Pan Daijing when the sun goes down. We don’t know what names Mars will be given by future generations, but new constellations of the current moment may sparkle over the course of two nights.

More welcoming to humans than the planet Mars, Mykolas Žilinskas Art Gallery will remain open after gallery hours on the evenings of 26 and 27 August for visitors to experience Atoui (August 26) and Daijing’s (August 27) audio solo set.

Financed by
Lithuanian Council for Culture