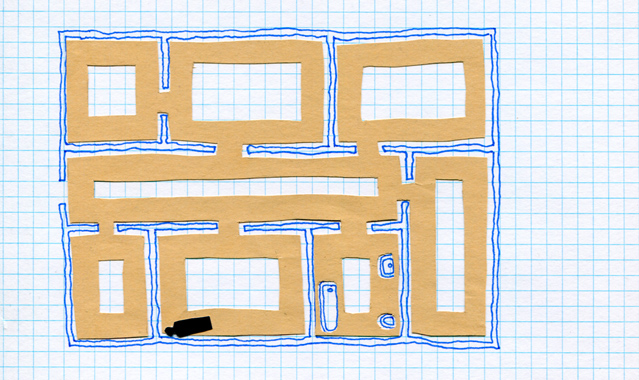 „What you feel with your tongue touching your teeth is like a different way of seeing. And this seeing through the tongue is even more primal than seeing with your eyes because when it is dark or if you are blind, you can’t see anything. But with the tongue, you can see the teeth always.”

These are some of the first sentences in the film “Dracula” by Piotr Bosacki (2010), which is currently shown at the pilot exhibition of the XII Baltic Triennial, “Prototypes”. The artists insists that the film is a comedy, but in it lies also an attempt to explain how the world is built. Bosacki describes the “shape of man”, tapping here into an insightful analysis of the world of senses, a story based on the knowledge of physics, chemistry and biology, intertwined with his personal confessions.

Piotr Bosacki is an author of several monographs, among which is „The Ecomony of Elements“, published in 2011 as part of his PhD thesis written at the University of Arts in Poznan in 2011.

At 6pm of Friday, November 28 at the CAC Cinema Piotr Bosacki will present some of his new films and take questions from the audience. Admission is free. Conversations in Polish will be translated.

That same night you ate invited to stay for another talk at the CAC Cinema, „Necropolitics of Radiation“ by Lonon based art historian TJ Demos.

„If I had one motionless eye, there would be no sense of aerial perspective, and if I look at something – for example this ball – I wouldn’t know if this was a small ball seen from close up or a big ball seen from a distance. You can see the situation we are dealing with here. One ball is far away, the other is close but they occupy the same horizon in my eye. So we can never know how far away it is. It is a kind of indeterminacy.
The essence of awareness is that the same picture can have different meanings.

Thanks to memory, I have a kind of second eye that watches from the side and is unambiguous according with my knowledge, telling me that there is some distance but hard to tell how big.

So, this second eye also knows that what it see is either big from a distance or small from nearby.

And then comes a third eye and so on. This is how probability waves.

So the awareness of the first eye continues with an unlimited number of eyes. Mechanically. And this is self-acting.

Physics. My beloved field.“
(excerpt of the transcript of film „Dracula“ by Piotr Bosacki, 2010)

Thanks to the Museum of Modern Art in Warsaw, Stereo Gallery in Warsaw, Jennifer Teets and Dario Malinowski.

At 6pm of Friday, November 28 at the CAC Cinema Piotr Bosacki will present some of his new films and take questions from the audience. Admission is free. Conversations in Polish will be translated.