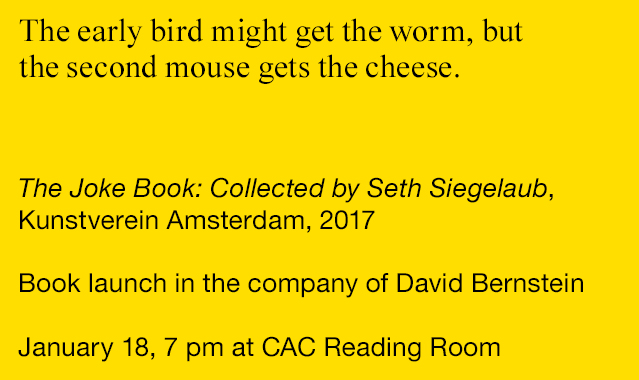 On Thursday, January, 7 pm the CAC Reading Room invites you to an official launch of the Joke book with David Bernstein.

Come test your smiles and Ha-Has, and join us for the official Lithuanian launch of The Joke Book: Collected by Seth Siegelaub, at the CAC Reading Room on Thursday January 18, between 7 and 8 pm.

The Joke Book is the first printed edition of the complete jokes & messages file that was found on Seth Siegelaub’s computer by his partner Marja Bloem. It contains jokes, quotes and pieces of advice, that Seth Siegelaub collected since 1999 and regularly redistributed via email amongst his friends.

Here are a few examples:

Knowledge is knowing a tomato is a fruit; Wisdom is not putting it in a fruit salad.
The early bird might get the worm, but the second mouse gets the cheese.
Evening news is where they begin with ‘Good evening’, and then proceed to tell you why it isn’t.”

We are happy to host Kunstverein Publishing for the occasion, and look forward to the performance by the amazing (and funny) David Bernstein (USA) who will introduce the publication.

David Bernstein (1988, San Antonio, Texas) is an artist based in Amsterdam and Brussels. He combines performance, sculpture, and writing to tell stories through objects. He likes to touch things and is obsessed with spatulas and Fiat Multiplas. From 2015 to 2016 he was a resident at the Jan van Eyck Academy in Maastricht. Before that, he studied at Sandberg institute in Amsterdam.

Note: „The Joke Book: Collected by Seth Siegelaub“ will be available at the launch for a special price of €10. Don’t miss it!

Please feel free to forward this.
Until then,
CAC RR & Kunstverein

Kunstverein would like to give special thanks to Marja Bloem, Stichting Egress Foundation, as well as AFK, Ammodo Fund and their (Gold)members for their continued support .