Three Uses of the Knife. The third annual series of lectures and seminars 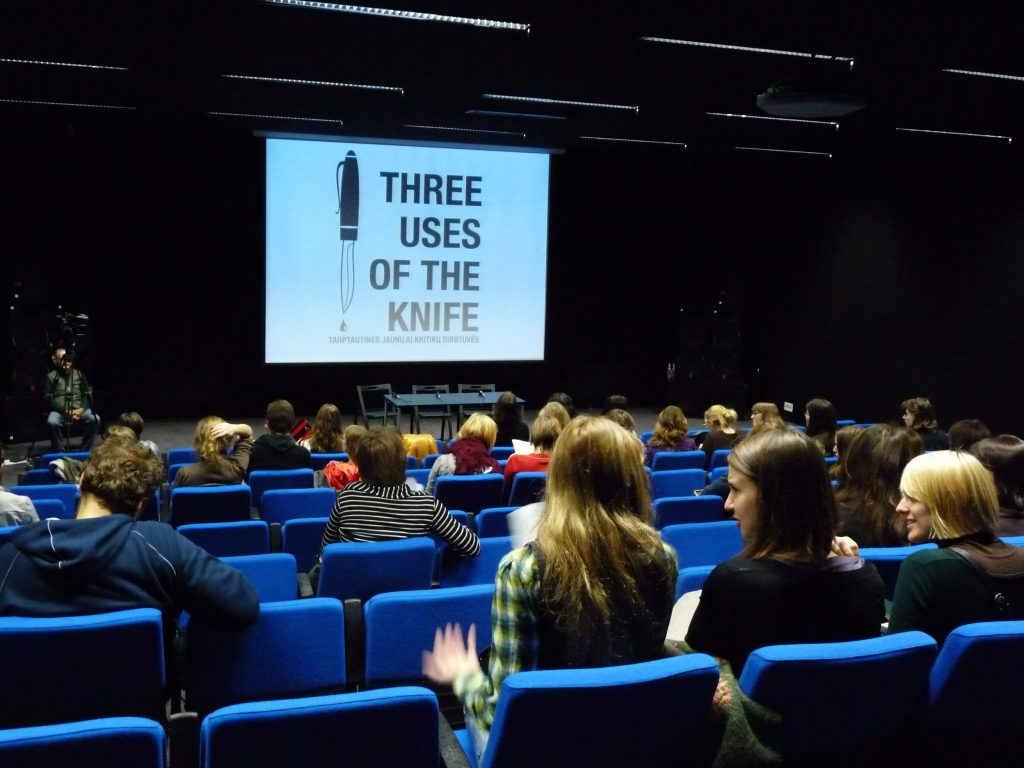 Contemporary (sometimes still known as visual) art is witnessing a growing number of artists who use lectures, discussions, monologues, reading, acting, karaoke, forms of alternative education, variety shows, or simply voice, in their practices. Art critic and curator Dieter Roelstraete has called this phenomenon a "narrative turn". Three Uses of the Knife series dedicates three November Fridays (November 4, 11 and 18) to the meetings with four practitioners and connoisseurs of such work.

The four meetings will take place in the Auditorium of the National Gallery (NDG, Konstitucijos Ave. 22), the Gothic Hall of the Vilnius Academy of Arts (VDA, Maironio Str. 6) and Memorial apartment-museum of Vincas Mykolaitis-Putinas (Tauro Str. 10-3):

Brief biographies of the speakers and introductions to the talks:

Heidi Ballet is a young curator who lives in Brussels. She has been working at Jan Mot Gallery in Brussels since 2008 and is part of the curatorial collective Komplot since 2007. In August 2011, she curated a show at Jan Mot titled The Encounter which proposed a closer and more transparent relationship between curator, visitor and artist and included works of Nina Beier, Jiri Kovanda, Karin Schneider, Francisco Camacho, Tino Sehgal and Yoko Ono.

This lecture takes Oral Culture as a basis. This was a series of orally based performances that took place at Jan Mot gallery in 2008–2009 and included performances by Robert Barry, Jonathan Monk and Tris Vonna-Michell, among others. Samples from this series will be joined together with an open exercise on the issue of oral language versus written language, cases of translatability and linguistics.

Luca Cerizza is a curator and writer, currently based in Berlin. Among his latest curatorial projects are Alighiero e Boetti Day, a 12-hours event dedicated to the seminal Italian artist (co-curated with Massimiliano Gioni and Francesco Manacorda; Turin, May 28th, 2011) and a solo show by Marcello Maloberti (co-curated with Pierre Bal-Blanc, CAC Bretigny and Nuit Blanche, Paris; July-October 2011). He is editor of monographs on John Armleder, Robert Barry, Massimo Bartolini, Daniel Buren, Liam Gillick and Daniel Roth and co-editor of the publication TYT II, a book about Olafur Eliasson’s editorial activity (Studio Olafur Eliasson/Walter König, 2009). His study, Alighiero e Boetti. Mappa, was published by Afterall/MIT (London/Boston, 2008) and Electa (Milan, 2009). His most recent book, L’uccello e la piuma: La questione della leggerezza nell’arte italiana (“The Bird and the Feather: The Question of Lightness in Contemporary Italian Art”), was published in 2010 by Et al. Edizioni, Milano. Cerizza is Berlin editor of Kaleidoscope magazine. He teaches at NABA academy, Milan.

In his essay The Storyteller: Reflections on the Works of Nikolai Leskov, published in 1936, Walter Benjamin mourned the end of storytelling. More than 70 years later we look at a general revival of storytelling in a range of segments of society, including those apparently distant from a need for such narration, for example, politics, marketing and journalism. In recent years, visual art too, almost as if to challenge its own identity, has recovered precisely that narrative dimension between storytelling and fable-making that the 20th-century avant-gardes (at least until postmodernism) had set aside. The last generation of artists has reactivated the possibilities of narration through a usually ‘discursive’, almost ‘oral’ practice to present new forms of narration. The lecture The Art of Storytelling, the Story(telling) of Art will pose and try to answer to some of the following questions: What is the art-historical background of such wave? How did the technological developments of the last decade influence and affect it? What are the social, political and moral implications of such attitude?

Alex Cecchetti lives and works in Paris. His work includes sculpture, video, performance, and painting—investigating issues as diverse and numbered as the mediums in which they are made. By the invention of protocols and distinct work methods, the artist manipulates objects, ideas and language and uses them as basic materials for the construction of multiple narratives in which the processes emerge as much as the accidents. The artist is mainly working in the fields of performance and installation. His recent presentations include an exhibition with the French artists Mark Geffriaud in Jeu de Paume, Paris in 2011, accompanied by a publication, Police Returns to the Magic Shop. In November 2011 Alex Cecchetti will also present a performance entitled The Conversation of the Arrows in the Exhibition Centre Pompidou, Paris.

During his continuous projects The Wednesday Salon (Salon du Mercredi) as well as I Giocatori (The Player) Alex Cecchetti is able to present unfinished performances, concepts and ideas in the process of development and suddenly experience the response of the public and the one of the other people invited. Thought and conceived to be part of these more complex conversations and narratives, he will present three performances in the form of a discourse. Come, at night bad words cannot be seen.

Olof Olsson is an artist based in Copenhagen. In his youth Olof Olsson dabbled in journalism, documentary photography, and as a radio disc jockey. At university Olof studied languages, philosophy and translation theory. In 1992 he did his first exhibition, a fictive account of an American photographer, Joseph Slightly, and his adventures and sufferings during the first half of the 20th century. Since 2007 he is working with spoken performances. During his session at the Three Uses of the Knife Olof Olsson will talk about:

“Names. It’s funny how easily we seem to accept names. But what sense does it make for a computer to carry the name of a fruit?

Reality. Sometimes we want it, sometimes we don’t. And a lot of the time we prefer something in-between, like a documentary film.

——–
All presentations will be delivered in English.

DAY 2 is curated by Gerda Paliušytė and Monika Lipchitz.