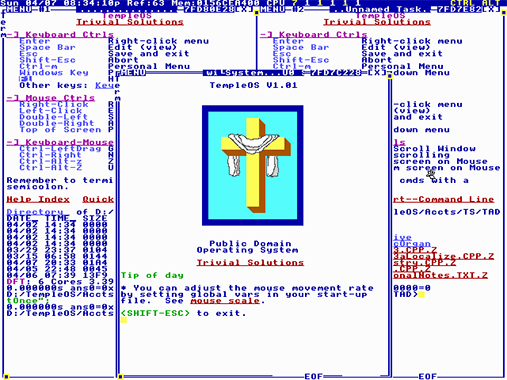 Saturday, September 5 at 20 pm at the CAC Cinema

On Saturday 5 September, on behalf of the Warsaw-based collective Brud, artists Bea McMahon and Claude Heiland-Allen demonstrate The Temple Operating System, the opus magnum of a singular programmer, Terry Davis.

Working in isolation for the past twelve or so years, Davis claims he can ‘talk to God’ and was told to ‘build the operating system by Him’. The result is a marvel delighting in wordplay and Biblical references. Programmed in a language called HolyC, it boots up with a sequence called Adam. A text-only interface built upon curses, itself a pun on the cursor, Latin for ‘running messenger’. Users may run a number of applications including After Egypt, allowing one to ‘communicate with God’ through an oracle. Flight simulators, first-person-shooters, racing tracks, survival quests… The Temple is clad in a garish low-res, high contrast aesthetic of sixteen colours.

The event is free of charge. The presentation is spoken in English.

Umstuelpung is part of a multi-event performance that forms part of Brud’s contribution to XII Baltic Triennial, Cryptocurrency Fairytale. The series of performances mimics the structure of a fairytale as described in Morphology of the Folk-Tale (1928) by Vladimir Propp: seven ‘actors’ (Villain, Dispatcher, (Magical) Helper, Princess of Prize, Donor, Hero and False Hero) perform thirty-one predestined functions, ranging from Villainy, Deception, and Lust, to Magic, Tryst, and Travail. The disparate elements of the ongoing whole unfolds before, during, and after the exhibition.

At another time and another place Juan-Pablo Villegas Delgado and Ada Pola throw a Chimposium, a ‘drinking-party for naked apes’, spanning three continents and four millenia. Kristina Skaldina acts as a medium for three new yoga asanas. Evil Krow embodies the Must Kalendar, a wandering minstrel, the Mad Monk, a common trope of South Asian folklore. And Bridget Currie, Andrea Palasti, and Edyta Jarząb pepper the Dark Web with tales of grief, festivity, and memory. The seven actors occupy singular units of time that correspond to the signs on a calendar. A clock appears. Three wavelengths of light: ultraviolet, daylight and infrared. An abbreviated chessboard, with a cosmopolitan cast.

Brud (Polish for ‘dirt’) describe themselves variously as a ‘parasite, hive-mind, suicide bomb, or, a four-letter word’. Their pronouns are plural and their genders fluid. The culture is kept alive in a former slaughterhouse in central Warsaw and on the Dark Web. And Kurz (Polish for ‘dust’) is a cryptocurrency devised by Brud. Kurz is analogue cryptography, slow and cumbersome, where proof of work is replaced by proof of art-work, and public ledger – by other kinds of books.