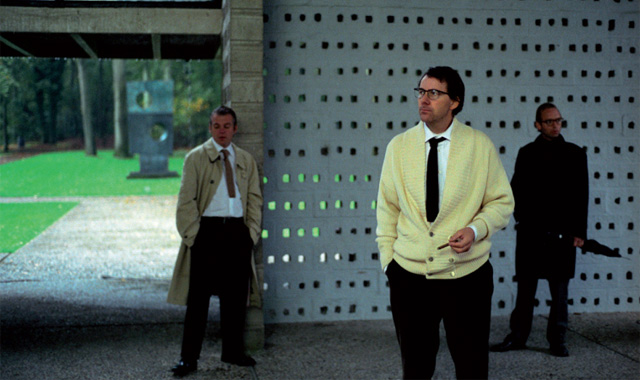 Gerard Byrne is one of the most prominent artists currently working in Ireland and represented Ireland at the Venice Biennale in 2007. Byrne’s work often uses source material with layer upon layer of mediation and re-enactment. In 1984 and Beyond (2005–06) Byrne presents film and photographs that deal with discussions of the future from the past, a futro. A discussion between prominent science fiction writers that was printed as an article in Playboy magazine in 1963 provides the script for the piece. Filmed in Utrecht at Rietveldt’s Sonsbeek sculpture pavilion and the Kroller Muller museum, Dutch actors bring to life the discussion between the eminent authors that include Arthur C. Clark, Isaac Asimov and Algis Budrys.

The writers’ speculations range in topic from the melancholic to the comic, from humanity and sexuality, to technology and its hand in the everyday life in the future. The performances are considered, they do not pose to act as a documentary, but engage the viewer with a questioning sensibility. The photographs appear to be taken contemporaneous with the discussion, yet do not neatly establish an exact date. Time slipstreams throughout the piece presented in CAC’s former cinema hall – an embodiment of a bygone architectural modernism, fitting for the material.

Part of ‘An Exhibition in Five Chapters’ curated by Catherine Hemelryk and ‘Contour Biennale’ curated by Nav Haq.

Supported by Culture Ireland and Embassy of Ireland