Centre of Attraction. The 8th Baltic Triennial of International Art 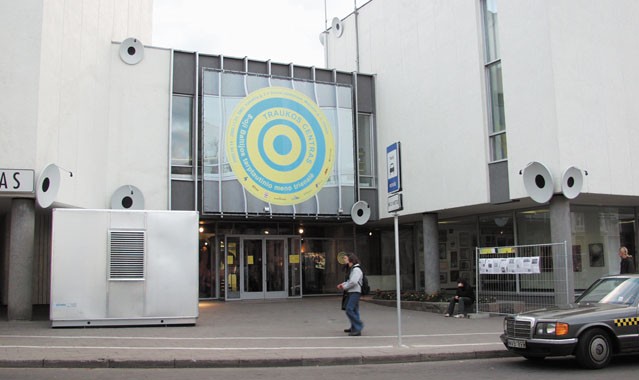 CENTRE OF ATTRACTION is a theme of the Triennial. The event aimed to research the phenomena of centres, their attraction, opportunities, dangers and the relationships among different centres (political, economic, cultural, social, etc.). The exhibition, accompanying panels, lectures, a seminar and a catalogue started new discussions about centres, sites of space and their transformation. Guided tours were organised to ensure the activity of visitors.
Around 60 international artists were invited. A majority of the artworks were produced especially for the Triennial. The exhibition aimed to establish a regular international art event in Eastern Europe and created a balance in the map of annual exhibitions, which function themselves as the centres of artistic and cultural dialogue.
The 8th Baltic Triennial of International Art was organised by the Contemporary Art Centre (CAC) in Vilnius.

CENTRE OF ATTRACTION: The 8th Baltic Triennial of International Art focuses on the subject of “the centre”. The discussion about the centre and its appeal towards its surrounding has been neglected in the last few years even though this is an issue that increases in importance. The centre produces a lot of gravity, a pressure which can in some cases also be an undertow with unknown consequences: large cities are becoming vast metropolises, private corporations are growing into international societies. In Europe more and more rights and regulations are given to the super-national institutions. In other fields like science and technology, quantum physics and research into the centrifugal force of black holes, centres attract new theories about the way we position ourselves. And in art today most recognition is still focused primarily in the so-called centres.

To chose the centre as the main interest for an international art exhibition in the capital of Lithuania may sound ironic, but is in fact logical considering that Vilnius is just 24 kilometres away from the geographical centre of Europe. Lithuania aims to provide the central infrastructure for the East – West connection with all its chances and consequences. Therefore the exhibition took Vilnius as a centre and research from this local point in concentric circles. This means that the majority of the artists came from Europe. The exhibition explored the relationship between centres of all kinds (political, economic, cultural, social, etc.). It also asked questions about the relationship and place of a recently converted nation that is in the middle of Europe, but has strong relationships to EU countries and borders with other EU-joining candidates as well as to former Soviet republics.

Over 60 artists were invited to take part in the Triennial. The participants’ list includes artists from the Baltic States, Scandinavia, Germany, France, the Netherlands, Belgium, Poland, Ukraine, Slovenia, Russia, New Zealand, USA etc. A majority of them came to Lithuania not only to install their pieces but also to carry out research and develop new works.

The seminar took place on the last days of the exhibition and aimed to attract a large interested audience. It added a theoretical aspect to the topic, stimulated the communication between different disciplines and encouraged communication between artists and theorists of various disciplines. It was a good chance to bring people together for three days to discuss on the base of the exhibition, new tendencies, discoveries and theories of centres.

After Opening Debate. It was held in a form of panel discussion on Saturday, September 14, i.e. on the next day after the official opening of the Triennial. It focused on the topic of CENTRE OF ATTRACTION: Biennials as the real/temporary centres of the art world. Besides the organisers and some artists of the project who shared their experience of collaboration work during the preparation of this Baltic Triennial, there were a few special guests: curators and organisers of the similar already established events in Europe (e.g. Manifesta). This allowed not only to compare the experience of working on the big scale projects in the countries with different economic and political background, but also enabled to share ideas about the future of the biennials both from local (i.e. Baltic region) and global perspective.

Accompanying Lectures. Five specialists from various disciplines were invited to Contemporary Art Centre, Vilnius during the time of the Triennial (September 13 – November 11, 2002) to give lectures, presentations and to take part in the discussion on a number of aspects implied by the concept of the exhibition. Not only this brought interesting specialists to Vilnius – it also encouraged dialogue among various disciplines, histories and nationalities. This was an important part of the educational program at CAC and was addressed mostly to young artists, art critics and other academic youth from Lithuania and neighbouring countries.

International Seminar. The three-day international seminar (November 5 – 7, 2002) was conceived as a closing event of the 8th Baltic Triennial of International Art. The seminar became a broad theoretical extension of the subject of exhibition, thus adding a new dimension to it and enabling the organisers to set the priorities for the future work in the same direction. The seminar also served as a meeting point for professionals of different areas – history, sociology, culture, science, etc.

History of the Baltic Triennial:

The exhibition was founded as The Baltic Triennial of Young Contemporary Art in Lithuania in 1979 while country was under the occupation of the Soviet Union. The Triennial was a result of expectation, invested in the concept of youth after the end of Stalinist period. But that generation of young artists also expressed a critical non-conformist spirit considered dangerous in the totalitarian regime. During the whole Soviet period and until the end of the eighties the Triennial provoked passionate discussions in political as well as artistic discourse. The exhibition has a long tradition of showing emerging art. In the times of the Soviet Union, it provided the only possibility for international exchange and was the sole showplace for avant-garde art. After the restoration of independent Lithuania in 1990, the Contemporary Art Centre in Vilnius directed by Kestutis Kuizinas and his young team of curators became the primary place for contemporary art in the Baltic States. The 7th Triennial of Baltic Art “Cool Places”, curated by Kuizinas included artists from the greater Baltic and Nordic Region. The 8th Baltic Triennial aimed to make a major new step forward and establish an international regular event and exhibition of contemporary art in Eastern Europe, a region, where despite over 10 years of independence there is no major regular international art event. The 8th Baltic Triennial aimed to fill a gap on the map of international networks of Biennials and Triennials.