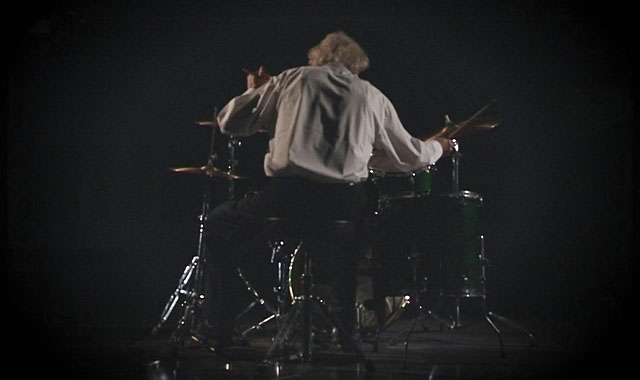 Vladimir Tarasov became famous as a free jazz musician playing percussion in the Ganelin, Tarasov and Chekasin trio. He is also acclaimed internationally as a solo musician. The spatiality, materiality and visuality of his music (along with his fellowship with Moscow underground artists like Ilya Kabakov) paved his way to the contemporary art scene. Since the 1990s has been Tarasov creating installations dominated by sound. Lithuanian audiences are likely to remember his installation Water music from 1994 that has definitely become a part of Lithuanian contemporary art history.

Inside Out is being exhibited in Lithuania for the first time. Five large-scale projections hone-in on the moment, in the video, when the sound strikes and observe the percussive impact that produces music. Tarasov was inspired to make the work following a trip to India when ‘[he] had opportunity to observe as rugs are woven. As I watched, the most beautiful drawings emerged. I stood behind the weaver, whose hand and foot movements reminded me of a drummer, creating an ornament from sounds; a drummer, who’s every hand and foot plays a different instrument, yet each part is connected by invisible strands. It is no longer clear whether the instrument coalesces with the body, or whether the body dissolves into the sound and becomes an instrument that collects sounds to be woven into an ornament. In this installation, we expressly see the energy of the sound at the moment of contact, that “inside out.” Hence, the title.’

Tarasov’s installation provides the viewer with a unique possibility not only to hear the music but also see it from the inside, track the emergence of the sound, and recognise its physical and spatial dimensionality.