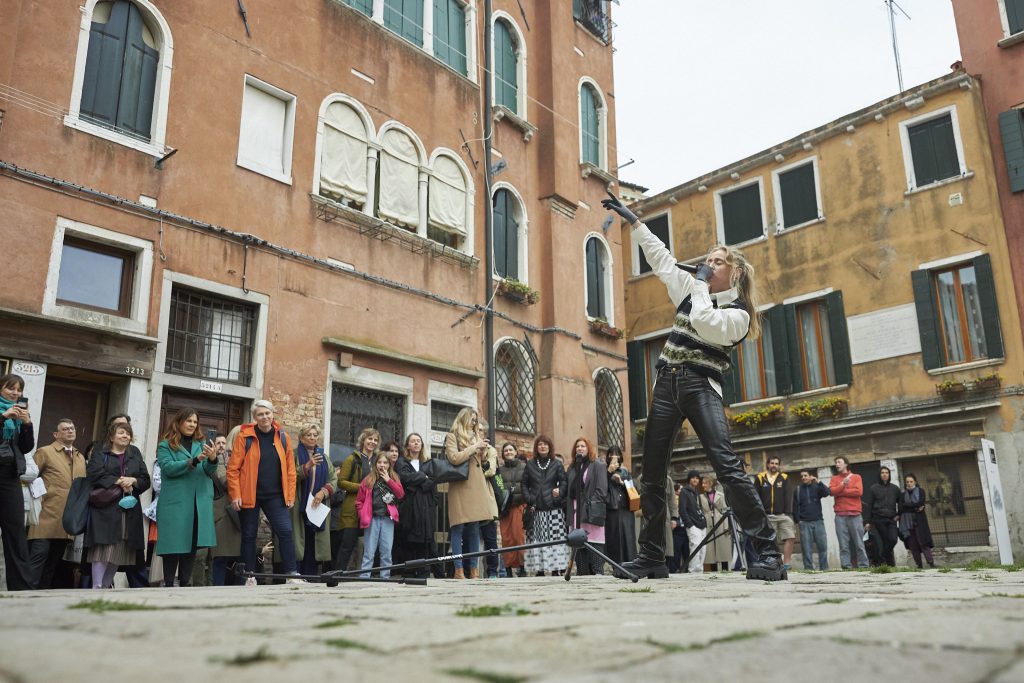 Yesterday the Venetian Castello district echoed with Swedish rap and Lithuanian acknowledgements to the team that has spent two years working on the Lithuanian National Pavilion and Robertas Narkus’s project Gut Feeling. Visitors can already stop by a surreal seaweed processing factory where a mysterious essence is produced; an extract that encourages people to rely more on the hunches in their gut. The pavilion will be open to all culture enthusiasts for eight months, until 27 November.

The unexpected highlight of the pavilion’s opening ceremony was a performance by the famous Lithuanian-born rapper Silvana Imam. She performed to a large crowd of contemporary art professionals and fans gathered at the initial event, and later gave a full concert in a nearby club.

“I have been following Silvana’s work since the beginning of her career in 2012. I spent my childhood summers not far from her native home in Plungė, so I feel somehow personally connected to her. I like the fact that she is part of a ‘world without borders’: she’s a Swedish, Lithuanian, Syrian, female rapper who speaks about thorny topics. Our pavilion, too, is a mix of different cultures, a pastiche of ideas. I invited Silvana because of her charismatic personality, I wanted to give her a stage,” says artist Robertas Narkus.

The Lithuanian National Pavilion has already been visited by the Venice Biennale jury, journalists, art critics and the public during special previews in the last few days and the curator of the project, Neringa Bumblienė, is delighted with the initial reactions.

“We’ve heard comments that the piece is visually compelling, photogenic, dynamic, witty and closely related to today’s issues. We’re also very happy that it somehow matches the aesthetics of the main exhibition of the Venice Biennale, The Milk of Dreams, which, just like Robertas’s project, is pregnant with colour, craftsmanship, diverse materials, forms and a strong connection to today’s reality and cultural heritage,” says Bumblienė.

“I’ve already heard from several critics that the Lithuanian pavilion is the ‘punkiest pavilion’. It’s great to get such feedback: I have to admit, the project is truly wacky. Despite all the apocalyptic moods and contexts, it sparks a sense of optimism,” says Narkus.

WHAT WILL THE AUDIENCE SEE WHEN VISITING THE PAVILION?

The artist says that the Lithuanian Pavilion is a gateway through which you enter a kind of separate little town: the first of the two spaces houses the alleged factory, while the second presents the office of Narkus’ fictitious organisation.

“In this factory, together with professional chef David Zilber, we use fermentation processes to process invasive seaweed and create a product that can remind us of our inner voice, to shift our attention to our intuition. The pavilion is thus about a journey inwards, about getting closer to what is tiny, and can sometimes seem spooky or even alien – like seaweed, which is both frightening and at the same time highly beneficial and nutritious,” says Narkus.

The project’s curator Bumblienė, who has been closest to the artist throughout the process, says that Gut Feeling is very visual, has a strong conceptual base and, most importantly, is replete with humour and sarcasm.

“The pavilion, just like the country it represents, is small, and the present time is very fragile in our whole region, so I’m pleased that the project is located so close to the people and the life of the city. Venetians and visitors can stumble upon the exhibition just by walking by, discovering it right next to local bars and restaurants. Viewers will have plenty to look at, and more: the exhibition works through various senses, even through smell. It’s enough to hear a few key words to get hooked and easily create one’s own meanings,” says Bumblienė.

The curator says that working with Narkus is always an adventure, as the artist constantly reacts to his surroundings and his work develops and changes during the process.

“Robertas is a performative artist. The visual part of the project was harder to foresee and grasp in advance, it was taking shape over the last six months of preparation, but anyone who is familiar with Narkus’ language and style will find it recognisable. The process behind this project was a bit different to usual, as we had prepared an application to the Lithuanian Council for Culture during the Venice Biennale competition, in which many of the key details were already fixed at the initial stage. We called the application text “The Book” and continued to consult it whenever we had doubts during the implementation of the project,” says Bumblienė.

The Lithuanian National Pavilion at the Venice Biennale will be open from 23 April to 27 November. It will be located in two buildings on Castello Street, Nos. 3200 and 3206, Campo de le Gate 30122, Venice. For all the latest news about the project, follow the project on Facebook or visit www.gutfeeling.xyz.

The Lithuanian Pavilion at the 59th Venice Biennale is presented by the Lithuanian Council for Culture. The project is sponsored by Justas Janauskas and Gabija Grušaitė, Lewben Art Foundation and JCDecaux Lithuania.